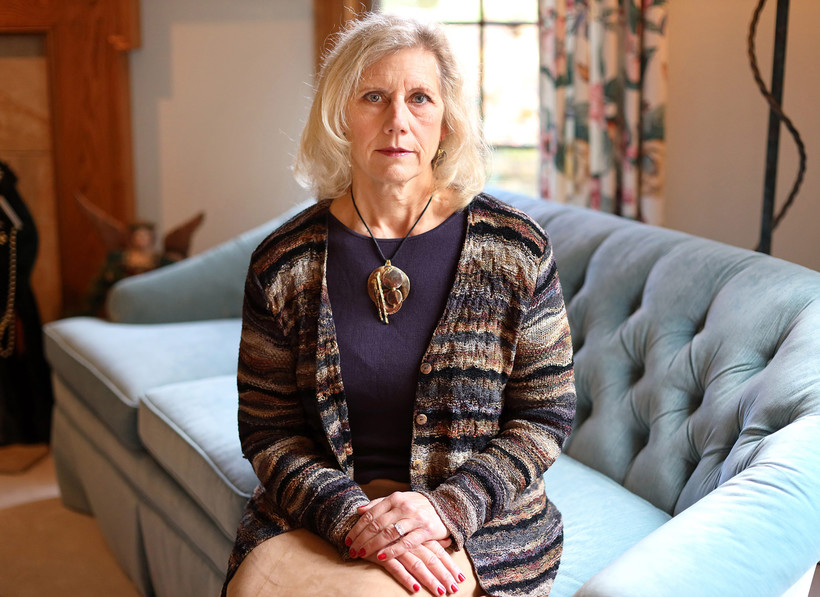 Dr. Kathy Hartke, a retired obstetrician and gynecologist and former chairwoman of the Wisconsin section of the American College of Obstetricians and Gynecologists, says Wisconsin’s punitive approach to pregnant people with substance abuse disorder is not effective. "Forced treatment," she says, "doesn’t work." She is seen in her home in Brookfield, Wis., on Dec. 6, 2019. Coburn Dukehart/Wisconsin Watch

Wisconsin’s law on substance use in pregnancy is wrong, leading doctors say

Practitioners say substance use during pregnancy should be treated like any other medical issue — not as a crime
By Phoebe Petrovic | Wisconsin Watch
Share: 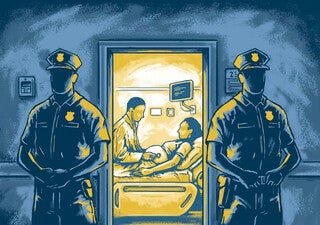 Policing pregnancy: Wisconsin’s ‘fetal protection’ law, one of the nation’s most punitive, forces women into treatment or jail

Every leading professional medical association that has considered the issue in the United States condemns approaches that punish pregnant people for substance use. In Wisconsin, Act 292 takes the opposite approach: The law can force people into treatment and even incarceration.

The law passed in 1997 amid a national "crack baby" hysteria, which in later decades was scientifically debunked. Longitudinal studies found that children exposed to cocaine in-utero did not vary cognitively or developmentally from children who were not exposed.

Each year since 2007, Wisconsin authorities have screened in an average of 382 allegations of unborn child abuse under Act 292 for further investigation. Wisconsin Watch spoke with two obstetricians with experience treating pregnant people with substance use disorder, along with leaders of one treatment facility, to explore what the state’s approach to this population could look like in the absence of Act 292.

Meta House, a Milwaukee-based facility that provides care to women with the condition, opposes the law. CEO Valerie Vidal says it reflects a "severe misunderstanding of substance use and mental health."

That’s because substance use disorder is a chronic health condition affecting the brain.

"The laws themselves are criminalizing women who are sick, and ultimately damaging them more by potentially having them be traumatized by a civil detention, instead of getting them access to the care and treatment they may need," she says.

Vidal points out the state does not act this way toward other health conditions that involve a component of personal decision-making and can affect fetal health, such as smoking cigarettes.

Dr. Kathy Hartke, an obstetrician and gynecologist, agrees. She currently co-chairs the Wisconsin Maternal Mortality Review Team, and previously chaired the Wisconsin Section of the American College of Obstetricians and Gynecologists.

Substance use disorder is "a medical disease that needs to be treated just like diabetes, high blood pressure, asthma," she says. "We have to (help people recover) humanely — nonjudgmentally and with empathy — and we have to do it scientifically and not punitively."

Hartke says one of the law’s flaws is "forced treatment," which "doesn’t work." Such actions also break trust between patients and providers, which she calls "critical."

A 2019 statewide public opinion survey from the Wisconsin Department of Health Services found that people generally endorse "supportive" approaches toward those with opioid use disorder — except when it comes to pregnant women. The survey found "very high support" for forcing pregnant women into treatment.

Another flaw, providers say, is the law’s punitive approach can deter pregnant people from seeking prenatal and addiction care.

Some women told Pew the fear of losing their newborns or other children caused them to hide their pregnancies while seeking treatment, or to avoid treatment altogether. In all, Pew concluded: "This barrier potentially puts pregnant women and their child at greater risk of harm than they would be if this policy did not exist."

Locked in the psychiatric ward

Hartke observed this effect firsthand. One of her patients was locked in a psychiatric ward under Act 292 — drugged with Xanax — although a physician said her opioid addiction did not pose a significant risk to fetal health. The patient was fired from her job, and her husband had to take leave from his. And during her next pregnancy, Hartke says, the patient avoided all prenatal care because she was so traumatized.

The Pew study found that health care professionals, national and Wisconsin experts "generally viewed the involvement of child protective services as negative." Outagamie County’s Children, Youth and Families manager Kay Kiesling acknowledged via email that families "often see CPS as a punitive agency," and that they need to build "trust and connection" to successfully engage families.

Dr. Charles Schauberger is board certified in both obstetrics and addiction medicine, and he’s dedicated the past 10 years of his career to caring for pregnant women with substance use disorder in La Crosse, Wisconsin.

Schauberger, who is medical director for residential treatment at Gundersen Health System, believes the knowledge that CPS can remove an infant after birth can be a powerful disincentive to seeking treatment.

Hartke says she tries to get patients into therapy, assuring them she won’t turn them in. But she advises that if they or their infant test positive for substances around delivery, CPS could take their newborn — showing how avoiding treatment during pregnancy to evade the child welfare system can backfire.

Medical professionals say Wisconsin should invest in "wraparound" care in which different providers cooperate with one another to address the multiple medical and nonmedical needs. Schauberger favors "one-stop shopping" with obstetrics, addiction and pediatrics under one roof.

In general, he notes, the earlier a pregnant person can stop using drugs or alcohol, the better the outcomes for the fetus.

Eleven pregnant women with an opioid use disorder interviewed by the Wisconsin Association for Perinatal Care, or WAPC, also recommended better communication among clinicians, according to a 2018 report, and non-judgmental providers to provide care "built on trusting relationships" and "focuse(d) on well-being."

"We need to help them learn the skills that they need to be effective parents and productive members of society," Schauberger says. "Social resources are vitally important and often lacking."

WAPC crafted a "framework for comprehensive care" that includes help with medical and nonmedical realities: mental health, chronic health conditions, food insecurity, child care and safe and affordable housing. The Alliance for Innovation on Maternal Health also has guidelines for treating pregnant and postpartum people with substance use disorder.

For the past several years, Hartke has worked with a coalition to develop and implement such a wraparound framework in Waukesha, called Wisconsin Women’s Health and Recovery Project, or WHARP. It is described as a county-level "collaborative model for behavioral health, physical medicine, and social services" for cis- and transgender women at risk of substance use disorder and their families, including transportation, child care or housing.

"A lot of them end up homeless if they don’t have services," she says.

Hartke was dismayed to hear that earlier this year, Marathon County rejected a Department of Children and Families grant for such a pilot project. It would’ve provided $327,100 over two years to fund three apartments for parents who had completed court-ordered rehabilitation and who were eligible to regain custody of their children — except for a lack of safe housing.

Kurt Gibbs, chair of the Marathon County Board of Supervisors, which rejected the grant, did not respond to requests for comment.

If WHARP is successful in Waukesha, Hartke hopes it can become a model for treating the symptoms and fixing the root causes of substance use.

And there’s something else she says the state could do to dramatically improve outcomes for pregnant people: extend BadgerCare coverage to 12 months postpartum. It currently lasts 60 days.

"Twelve months is what we want," Hartke says. "Six to 12 months is a very dangerous time for postpartum women."

Data reviewed by Wisconsin’s maternal mortality review board show this period is deadly due to hypertension, cardiomyopathy, postpartum depression, intimate partner violence, suicide and drug overdose, including what Hartke says is a "significant increase in overdose death in the first year after delivery."

Gov. Tony Evers’ 2021-23 budget proposal included covering 12 months postpartum, but the Legislature cut that to three months. The state’s Department of Health Services has submitted a waiver to the federal government to extend to three months, but it has not yet been approved.

As lawmakers and the public debated Act 292, critics noted the bill lacked funding for treatment programs. Rep. Bonnie Ladwig, R-Racine, who introduced the bill, dismissed those concerns in her floor speech, saying the law targeted people who refused treatment, not those who willingly sought it.

But the problems identified over two decades ago — a dearth of treatment programs and the high cost of those that exist — remain today.

"It’s fine for decision-makers to say, 'Well, a pregnant woman using substances should get treatment,'" says Vidal, of Meta House. "Okay, but then how are you supporting that woman to navigate the various systems to get her into treatment, so that she’s not losing rights?"

Advocates for pregnant women contacted by Wisconsin Watch all said the state has a shortage of high-quality addiction treatment programs. The Pew study attributed that to the state’s "stricter" certification requirements for counselors who provide such services.

At Meta House, every counselor is dually certified in substance use disorder and mental health. Today, it has 35 beds for women and 15 for children. Its residential program often has a six-month waitlist. Vidal says Meta House plans to expand to serve more clients.

It’s expensive to provide this level of care: At Meta House, it averages about $450 per bed per day. Wisconsin’s Medicaid system reimburses substance use treatment between $99 and $250 per day. Referring counties sometimes reimburse room and board costs, and state grants partially — but do not fully — cover the rest, Vidal says.

Not everyone requires that level of care. Treatment can take many forms: inpatient, outpatient, group therapy, one-on-one counseling and/or medication assisted treatment. "In all types," Schauberger says, "the demand exceeds the supply."

For example, Sandra Storandt, a child protection services worker in Jackson County, says there are no inpatient programs in her rural county. The nearest program is in Eau Claire, 45 minutes away, followed by La Crosse.

Just a handful of programs, including Meta House, accept moms and children together. A pregnant parent who already has children might need to entrust them with a friend or relative, or child welfare officials will arrange for them to go to foster care.

Separation can traumatize both parent and child, says Christine Ullstrup, Meta House’s vice president of clinical services. Hartke adds that so long as children are in a safe situation, "infants that can stay with their mother do better."

There is currently no directory of Wisconsin-based doctors and midwives experienced in providing care to pregnant people with substance use disorder, says Dr. Charles Schauberger, who is board certified in both obstetrics and addiction medicine and has dedicated the past 10 years of his career to caring for pregnant women with substance use disorder.

Enforcement of Act 292 varies depending on the county where one resides. But Schauberger’s experience tells him that "if a care team has the reputation of working hard to keep patients in treatment and providing great prenatal care, county health authorities, including CPS, are much more likely to back off."

Schauberger offered this advice for pregnant people with substance use disorders:

Pregnancy Justice has created a fact sheet for healthcare providers and pregnant people, and offers this advice in a know your rights sheet:

The nonprofit Wisconsin Watch (www.WisconsinWatch.org) collaborates with WPR, Milwaukee Neighborhood News Service, PBS Wisconsin, other news media and the University of Wisconsin-Madison School of Journalism and Mass Communication. All works created, published, posted or disseminated by Wisconsin Watch do not necessarily reflect the views or opinions of UW-Madison or any of its affiliates.

This article first appeared on Wisconsin Watch and is republished here under a Creative Commons license.