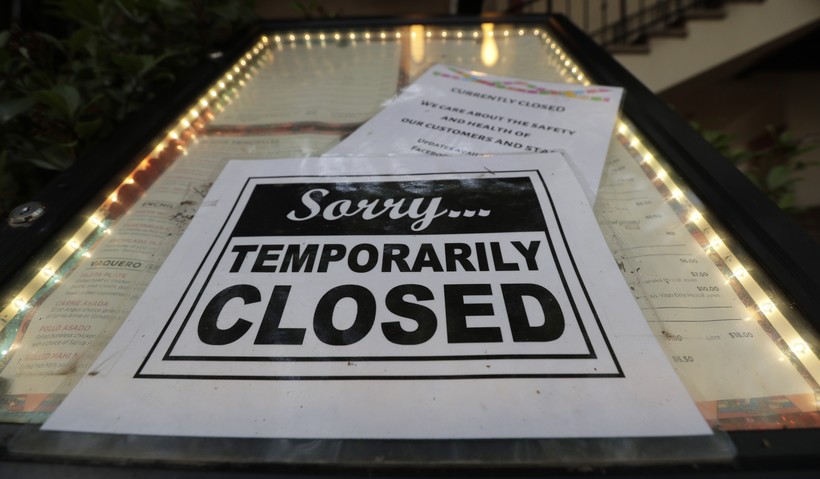 In this April 28, 2020 file photo, a closed sign is posted at a restaurant along the River Walk in San Antonio. Eric Gay/AP Photo

Wisconsin's Economy Shrinks By Nearly 33 Percent Between April And June

Wisconsin's economy shrunk by an annual rate of 32.6 percent between April and June compared to the first three months of 2020, according to new numbers released Friday from the federal Bureau of Economic Analysis, an agency within the U.S. Department of Commerce.

The drop is the highest recorded by the agency since it started tracking quarterly GDP figures for states in 2005. It dwarfs some of the worst losses seen in past quarters, which hover around 8 percent.

Friday's numbers provide a fuller picture of the economic toll of the coronavirus, reflecting the effects of Democratic Gov. Tony Evers now-defunct stay-at-home order which shut down whole sectors of the state's economy, along with months of layoffs leading to a spike in unemployment claims, and widespread uncertainty throughout all levels of the economy.

The Bureau of Economic Analysis reports GDP numbers as an annual rate, meaning if Wisconsin's economy continued to contract at the pace seen between April and June through the end of the year, the economy would have shrunk by 32.6 percent.

Menzie Chinn, a professor of public affairs and economics at UW-Madison, agreed.

"It is massive," Chinn said. "It's unprecedented in terms of how fast it hit and how deep."

All 50 states and the District of Columbia saw declines in GDP during the second quarter.

Both Kishor and Chinn noted that, despite the size of the drop in Wisconsin, the state is about average when compared to declines in GDP seen in other states. Wisconsin is also on par with the 31.4 percent GDP drop seen nationally in the second quarter.

Chinn added that the economic pain caused by the pandemic has not been shared equally.

"Some people, particularly white collar workers, office workers, probably didn't experience as big a negative impact in their incomes and in being laid off than people who are in the service industry," Chinn said.

The state's losses put it virtually in line with the contraction seen across the five-state Great Lakes region, which shrunk overall at an annual rate of 32.8 percent. Among the Great Lakes states, Illinois' economy fared the best in the second quarter, and Michigan saw the biggest losses.

Between January and March, the Bureau of Economic Analysis reported a revised drop in Wisconsin's GDP at an annual rate of 8.8 percent compared to the last three months of 2019. Those first quarter figures only captured the very beginning of the economic effects of the coronavirus outbreak in March.

The sectors that slowed down growth the most were durable goods manufacturing, health care and social assistance, and hotels and the food service industry.

Gross domestic product is one of the widest measures of economic activity, and it's seen as a key indicator of the health of an economy. It measures the costs of all goods sold, like tools and supplies purchased at a hardware store, and all services provided, like a plumber getting paid to fix a leaky pipe.

Kishor expects to see positive growth for Wisconsin again in the third quarter, which covers July through September, but overall for the year, he expects GDP growth to be negative.