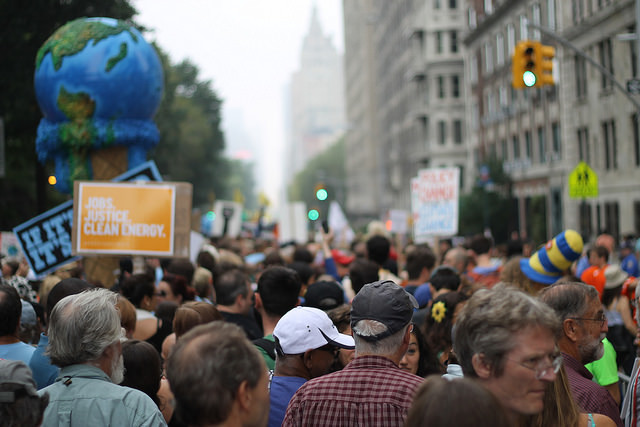 Among the 400,000 activists who took part in what is reported to have been the world’s largest-ever climate march in New York City on Sunday were a number of Wisconsin residents.

All 50 states were represented at the People’s Climate March, which its organizers say was meant to send a message to global leaders that action is urgently needed to address the issue of climate change.

Madison-based environmental activist Laura Hanson Schlachter estimated that about 250 people from Wisconsin joined the march. She herself organized three buses of 150 Wisconsin residents to join the global event.

“It’s a really incredible feeling to know that you’re joined with people in 166 countries around the world,” she said. “There was a huge Jumbotron with shots from all around the world.”

“From my point in the back of the march, it looked like it went on infinitely,” she said. “There were a bunch of young people as well as old people. On our bus, there were people from ages 3 to 70.”

Kiernan said she joined the movement to demand action on climate change after coming to understand the broad implications of a changing climate on people’s lives beyond artic conservation.

“When I was a little kid I thought of global warming as ‘Save the polar bears’, but now I realize it’s so much more than that,” she said.

Hanson Schlachter said that she believes marches like the People’s Climate March make an actual impact on policy and business behavior, pointing to the news that the Rockefellers, of Standard Oil wealth, have chosen to divest the Rockefeller Brothers Fund of fossil fuels, instead investing in green energy. By doing so, the Rockefellers have joined a coalition of philanthropists ridding themselves of more than $50 billion in fossil fuel assets.