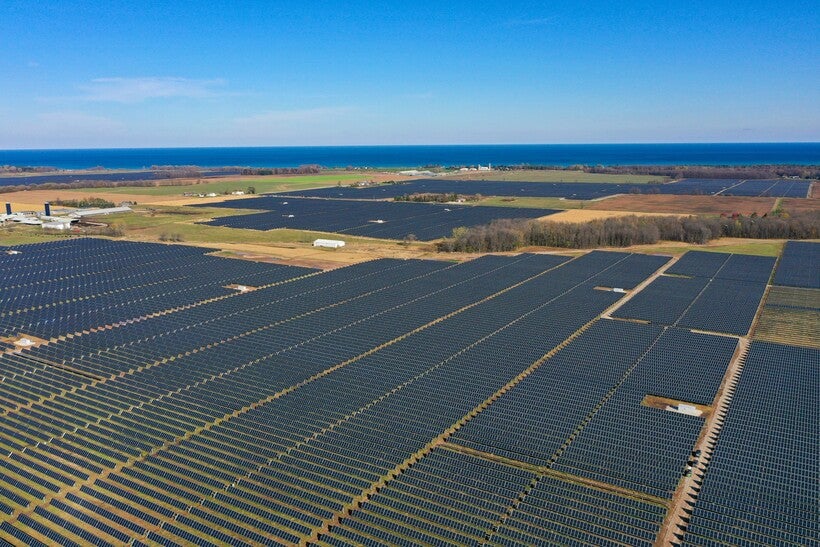 The Two Creeks solar plant in Manitowoc County went online in November. With half a million solar panels, the solar farm can provide enough power for 33,000 homes.
Photo courtesy of Wisconsin Public Service.

Wisconsin is seeing a rapid conversion to solar energy as a growing number of utilities set goals to go carbon neutral by 2050. The investment comes despite challenges brought by the COVID-19 pandemic.

New solar installations nationwide are expected to increase 43 percent from 2019 to a record 19 gigawatts of capacity installed in 2020, according to projections from the Solar Energy Industries Association. Solar also accounted for 43 percent of all new electricity generating capacity added this year.

The state currently has 20 solar farms under active development that will generate more than 2.2 gigawatts of power, according to Michael Vickerman, policy director for RENEW Wisconsin. Vickerman said that's enough capacity to account for roughly 7 percent of the state's annual electricity use.

"So there will have to be another wave — several waves in fact — of solar coming down the pike after the first 20 projects have been built," said Vickerman.

The shift in the electricity generation mix has been driven by declining costs of utility-scale solar as coal has become more costly to operate, Vickerman said. Solar costs have dropped more than 80 percent in the last decade.

Madison-based Alliant Energy announced this year that it would phase out coal from its electricity generation by 2040, including the retirement of its Edgewater coal plant in Sheboygan. In May, Alliant detailed plans to invest $900 million to add 675 megawatts of solar as part of a goal to add 1 gigawatt of solar power by the end of 2023.

"Our solar projects we're very attractive from the standpoint that they are the right choice for our customers thinking about this long term and looking at the generation," said David de Leon, president of Alliant subsidiary Wisconsin Power and Light. "So, not only is it that the cost of these projects have been coming down and have given us an opportunity to really incorporate those into our operations from a cost perspective. But, also it's doing the right thing for the environment."

Alliant also purchased solar projects in Rock and Green counties this fall that are expected to contribute to the utility's goal of building 1 gigawatt of solar.

WEC Energy Group, which owns We Energies and Wisconsin Public Service, also pledged to go carbon neutral in the next three decades. In November, the utility company announced it was retiring 1,800 megawatts of fossil fuel generation and investing $2 billion in renewable energy that includes 800 megawatts of new solar power.

"A lot of this is made possible also because of the drop in prices from solar from (the) last five or 10 years," said Brendan Conway, spokesperson for WEC Energy Group. "Things like this would not have been possible in the past because, obviously, anytime we're looking at a project, it has to make sense fiscally because that's what our customers expect."

WEC Energy Group has already received approval from regulators to invest in 300 megawatts of utility-scale solar projects. They include the state's largest solar farm, Badger Hollow in Iowa County, and the Two Creeks solar project, which went online in November. Subsidiaries We Energies and Wisconsin Public Service co-own those projects with Madison Gas and Electric.

The first phase of the Badger Hollow solar farm was set to go into service by the end of this year, but the coronavirus pandemic set the project back four months. However, the COVID-19 crisis has created only minor delays for utility project construction and little slowdown in new announcements, according to the Solar Energy Industries Association.

The recently passed $900 billion COVID-19 relief bill may provide additional incentive for solar development with the inclusion of a two-year extension on a solar energy investment tax credit at 26 percent. The tax incentive was expected to wind down next year.

Tom Content, executive director of the Citizens Utility Board, said the challenge with making a rapid transition to renewables and solar power is that customers don't want to pay twice.

"You don't want to have to pay for the solar plants that will be needed, but continue paying ad nauseam for the coal plants that are no longer needed and the utilities want to shut down," said Content.

Ratepayers have been paying off utility investments in pollution controls that were installed at coal plants in the last decade. Content urged utilities to consider innovative financing to pay off those investments, noting customers shouldn't be penalized as part of the rapid energy transition.