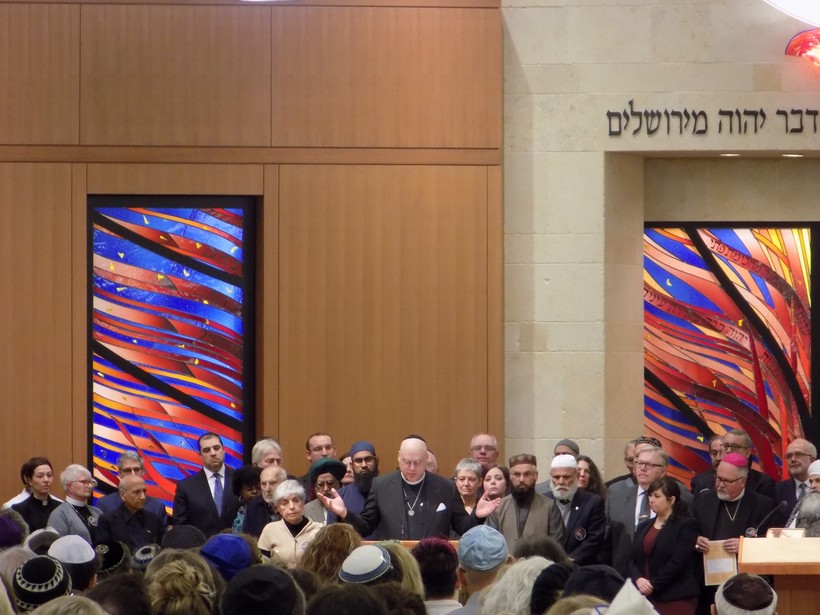 More than 1,000 people gathered Monday night at Congregation Beth Israel Ner Tamid to honor the 11 worshippers killed at the Tree of Life Synagogue in Pittsburgh over the weekend. Six others were injured, including four police officers, in an attack that has reverberated throughout communities across the country.

Elaine Nelles, a member of the Congregation Beth Israel, in the Glendale suburb of Milwaukee, said the attack feels personal.

The FBI is investigating the Pittsburgh shooting as a hate crime. Nelles lamented the nature of the attack.

"There’s too much going around about targeted killings about Jews, or people who are African-American, or, you know, different minorities — gay people — it’s too much," said Nelles.

Nelles and other attendees sang and held hands during the vigil.

"Let us take one another’s hands in defiance and in confidence and in hope," said Congregation Beth Israel’s Rabbi Joel Alter in a call for unity. "Let us link and raise our arms in solidarity and let us resolve to win this battle."

Speakers sang the names of the victims, which include a married couple and the two brothers.

Elana Kahn, director of the Jewish Community Relations Council of the Milwaukee Jewish Federation, said she felt supported by all those willing to walk into a synagogue days after the attack.

"To defy that fear, but also what we saw tonight was unbelievable," said Kahn. "Our bima, the dais, was packed full of faith leaders from all different faiths."

She said the last time she saw a similar outpour of support was in 2012 when a gunman opened fire at a Sikh Temple in Oak Creek, killing six people.

Keeping guard at the vigil were at least a dozen members of law enforcement from the Milwaukee County Sheriff’s Office and the Glendale Police Department.