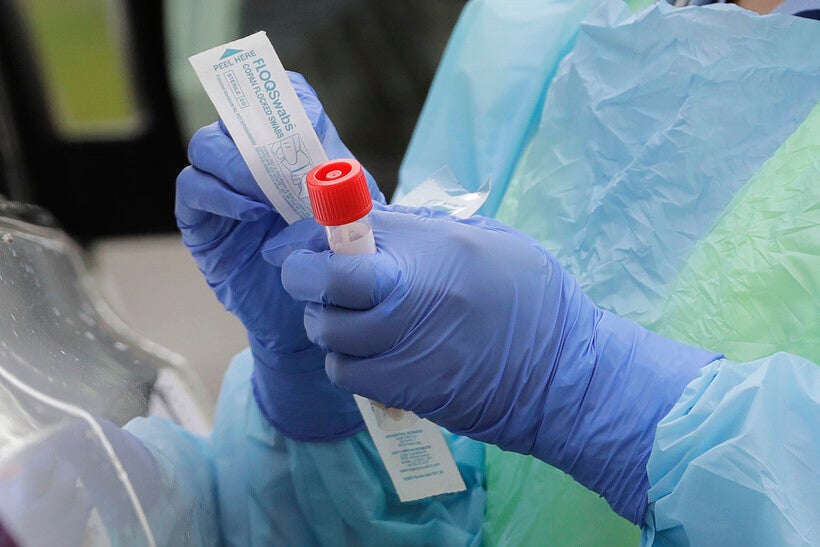 In this April 2, 2020, file photo a nurse holds a vial and a swab at a drive-up coronavirus testing station at a hospital in Seattle. A federal report due out Monday, April 6, finds that three out of four U.S. hospitals surveyed are already treating patients with confirmed or suspected COVID-19. Ted S. Warren/AP Photo

Four tribes in Wisconsin are receiving around $4.1 million from the U.S. Department of Housing and Urban Development to help improve public health and safety during the pandemic. The funding is split among the Bad River and Lac du Flambeau Bands of Lake Superior Chippewa along with the St. Croix Chippewa and Ho-Chunk Nation.

The money is part of $100 million awarded to tribes nationwide in Indian Community Development Block Grant funds under the CARES Act. The aid will be used to support projects like construction of new housing to address homelessness or overcrowding and transitional housing for those under quarantine.

Here's the breakdown among the four Wisconsin tribes:

The Ho-Chunk Nation's public relations director Ryan Greendeer said the $1.5 million it received will go toward assistance programs for rent, mortgage and utility payments. Greendeer is concerned there will be more need for utility assistance if the Public Service Commission does not extend a moratorium on utility shutoffs.

"And at this point, we don't really know that there's going to be enough resources, enough funds on hand to do that," said Greendeer. "So, we're kind of hopeful that there'll be another congressional solution to some of those issues that our community faces."

Congress is at a standstill on another coronavirus relief package after lawmakers left Capitol Hill in August for their summer recess.

Greendeer said CARES Act funding they've already received through the Indian Housing Block Grant program is going a lot faster than they anticipated. The tribe has been using funding to send out hundreds of sanitation packages to households, as well as provide thousands of personal protective equipment to families.

So far, the tribe has spent more than $354,000 to provide rental assistance to around 250 families. He said they've also issued 270 grants through their utility assistance program.

The Ho-Chunk Nation has also seen a recent uptick in applications. Greendeer said that may stem from the expiration of the weekly $600 boost in unemployment benefits.

"We obviously don't have enough funding to keep everybody off the streets, but we want to make sure that they do have the adequate resources," said Greendeer. "The CARES Act absolutely provided some great resources to keep those family members in housing and safe."

The Ho-Chunk Nation had confirmed 101 COVID-19 cases and 2 deaths as of Friday, Greendeer said the tribe has around 8,000 members across the nation, the bulk of which reside in Wisconsin.