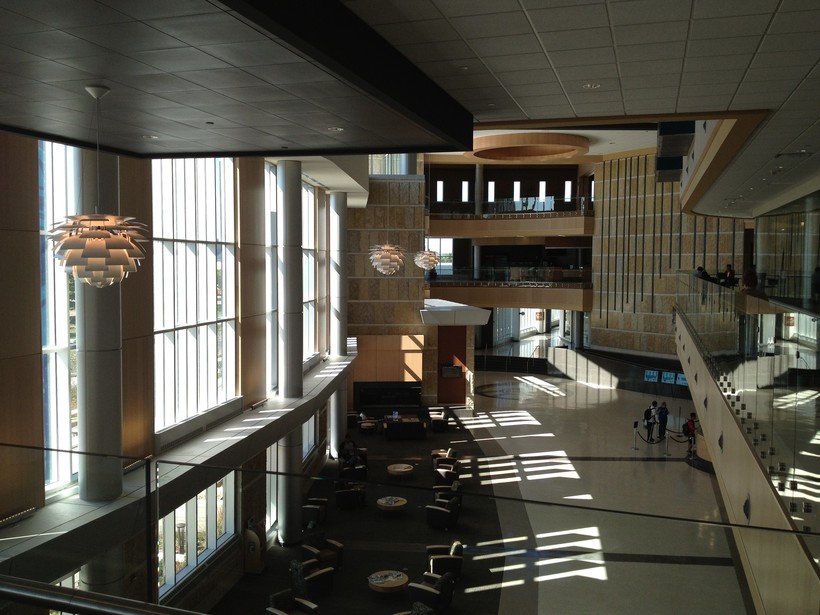 A file photo of the lobby of Madison College's Truax campus. wistechcolleges via Flickr (CC-BY-ND)

Wisconsin technical colleges are projecting enrollment declines of between 3 and 10 percent this year compared to 2019, bucking the typical trend of enrollment spikes during economic recessions.

Wisconsin's unemployment rate hit a high of 14.7 percent in April when large portions of the state's economy shut down due to the coronavirus and Gov. Tony Evers' "Safer at Home" order, which restricted indoor gatherings. The unemployment rate fell to 6.2 percent in August, which is still double what it was before the pandemic.

"So, a lot of people aren't necessarily looking for a new career," said Barker. "They're just waiting to get back to their old jobs and hoping that comes up. So, we saw people delay their decision as late as possible."

Barker said CVTC's enrollment is down by around 4 percent compared to this time last year, though that could change with open enrollment periods in December, January and March.

Part of the enrollment decline, said Barker, was caused when students in fields like health care and nursing were unable to finish clinical work in hospitals and long-term nursing facilities due to coronavirus restrictions. That delayed graduation and left fewer open spots for new enrollments.

Nicolet Technical College in Rhinelander is projecting a 3 percent enrollment decline through the end of 2020 despite strong numbers this summer. Executive Vice President of Academic and Student Affairs Kate Ferrel said COVID-19 is changing every single paradigm and historical enrollment pattern technical colleges have come to expect.

"I think we're in a position where people are just really uneasy making a decision, just one way or another, said Ferrel. "And so they're delaying it to see where we end up with a vaccine or, you know, with the situation with the flu season in general. So that's what we're hearing is that people are ... a bit hamstrung by the great number of uncertainties that exist."

Ferrel said Nicolet Technical College invested in technology and professional development prior to the pandemic to offer more and better online learning options She said the campus also created a competency-based education model, in which students can get credit for prior work experience.

Those changes have helped buffer some of the impacts of coronavirus on enrollment, said Ferrel. She said despite the enrollment projections, the physical number of students has been increasing, though the number of credits taken has decreased.

Fox Valley Technical College Executive Vice President Chris Matheny said they're expecting enrollment to be down between 3 and 9 percent this year, with some programs more affected than others. He said apprenticeship enrollments are up slightly, which is significant for local employers.

"People are trying to kind of preserve their employment where it's at and do everything that they can to do that," said Matheny. "I think, also, there's a lot of disruption in families. And when there's disruption of families, that takes time to sort out."

Northeastern Wisconsin Technical College President Jeff Rafn said uncertainty over whether hands-on training in fields like health care and engineering will be available has likely contributed to a projected 3 to 4 percent enrollment decline, much of which happened this summer.

"So, you know, that's a lot of change for people to get used to," said Rafn. "So, I think that had a deterrence in a certain way."

Rafn said it's likely some students decided to take a "gap year" in 2020 and waited to enroll later in hopes that COVID-19 won't be as much of a disruption.

Rafn said that because of the pandemic, NWTC has learned better ways to connect with prospective students via text messaging, and has new online learning models with live instruction using online videos. Rafn said the college has given students 700 laptops and around 100 internet hotspots. Still, he said some students living in more rural parts of the district don't have access to reliable high-speed internet, so the campus has opened regional learning centers to offer broadband access.

Wisconsin Technical College System spokesman Conor Smyth said because the state's 16 technical colleges have varying enrollment periods, statewide enrollment data for 2020 won't be available until sometime next year. But he and others at the state's two-year technical campuses are optimistic that an enrollment spike could be around the corner.

"As things start to progress through the winter and into spring and things change in terms of the status of the pandemic, the economic reality starts to sink in in a new way," said Smyth. "And we may see enrollments spike quickly in terms of people trying to get back into the workforce with an added skill set."