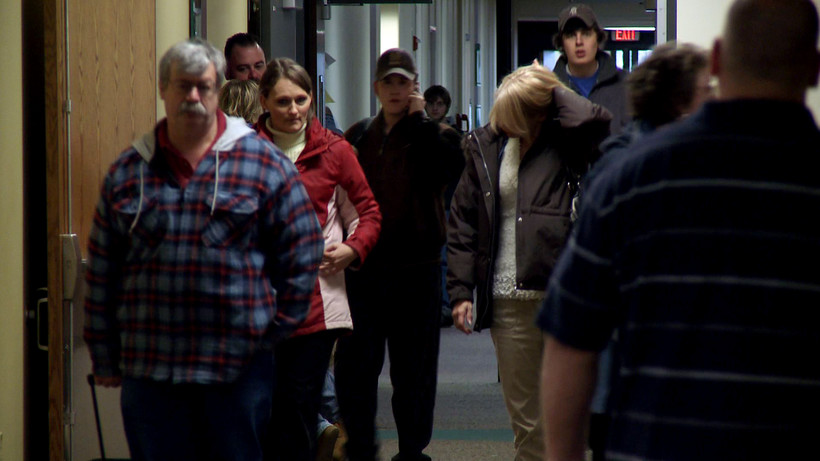 Students walking through Blackhawk Technical College are shown in this photo from a video on Tuesday, March 31, 2009. Mark Carlson/AP Photo

In downtown Milwaukee on Friday night, Kyle Pavek will wear his cap and gown with confidence — and some peace of mind.

Pavek is graduating from Milwaukee Area Technical College (MATC) with an associate's degree and a full-time job.

"To be employed before I even graduate is an amazing thing to happen," he said.

In his classes, Pavek said he learned to take apart and deeply understand biomedical equipment of all kinds.

"MATC, they're all pretty hands on so once I got started with the smaller electronics, they kind of built us up," he said.

In his last semester, they worked on CT scanners and other imaging devices.

"It was amazing transition to see how the small circuits that MATC had us working with the first semester correlated to the large items at the hospitals," he said.

While in school, Pavek had an internship, organized through an MATC course, at his future employer.

"They rate you on, like, would they hire you? Do you have hirable qualities? And then that's how you get your grade," he said.

Pavek got a good grade and a job offer, as have many of his classmates.

Wisconsin Technical College System President Morna Foy said that this is no accident.

"When we tell graduates they're going to be able to get a job, that's because we've already touched base with employers and found out what it is you need to do to have that job," she said. "Our students learn how to do things."

A recent report from the WTCS shows that of the 70 percent of 2018 technical college graduates who went into the workforce, 94 percent had jobs within the first six months. About 80 percent had jobs directly related to their studied field, according to the report.

Foy said that the job placement rate is consistent with rates over the past decade. Most of the graduates — 94 percent — reported working in Wisconsin, with 72 percent in the same district as the college they attended.

Foy highlighted the growth in median salary for all degrees conferred by the system. For 2018 graduates, the average salary six months after graduation was $40,245. Associate degrees earned the highest median salary at $43,678.

"That exceeds some recently reported four-year graduate salary levels, so we're pretty happy about that,” said Foy. "We think it's a great reflection — not on the alignment of our programs with employers' needs — but also that the skills that our graduates bring into the workplace are highly valued."

Wisconsin technical colleges work closely with local employers to develop curricula and many report viewing the system's graduates as a "vital pipeline" for workers, Foy said.

The system, which is open-access, has a six-year graduation rate of 48 percent, about twice the national average for public, two-year colleges, according to a system spokesman.

Foy also praised the state's investment in the system  — be it from taxpayers, employers, students or lawmakers — saying that the job placement and graduation rates demonstrate the payoff.

She said recently-approved components of the state budget are also a "reflection on the return on investment" Wisconsin has made in the system.

State lawmakers just committed $25 million to WCTS in the next budget.

"The state doesn't have unlimited resources, but when they do have resources, they need invest them in places where they're going to get the greatest return," Foy said. "I think yesterday's decision gives some indication that collectively, the state feels like the technical college system is providing that quality return."