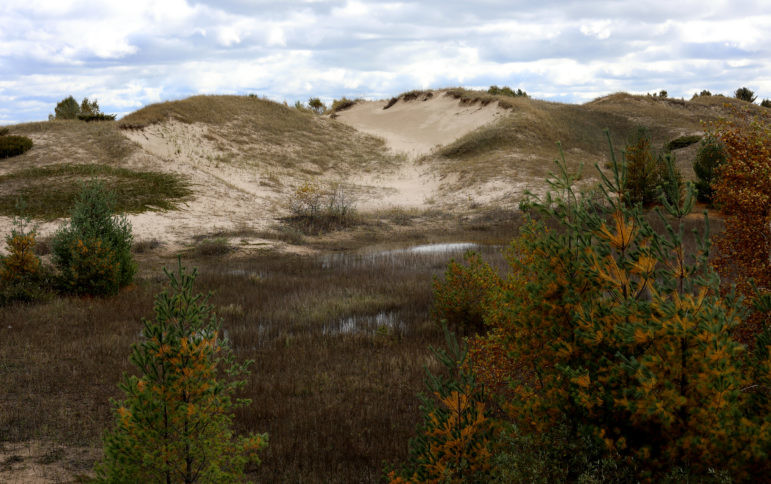 Sand dunes are seen at Kohler-Andrae State Park near Sheboygan, Wis. According to retired state Department of Natural Resources wetland ecologist Pat Trochlell, this sandy spot on the lakeshore is a globally rare and fragile dune system. The habitat was created over thousands of years, continually shifting with the wind. The dunes are held together without soil by roots, supporting several threatened species of plants and insects. Photo taken Oct. 11, 2018. Coburn Dukehart / Wisconsin Center for Investigative Journalism

The Wisconsin Supreme Court heard arguments Friday in a dispute over a land swap as part of Kohler Co.'s plans to build a new golf course along Lake Michigan. A citizen's conservation group is asking the court to allow them to challenge the land exchange while the company and Wisconsin Department of Natural Resources argue the group has no standing in the matter.

In 2018, the Wisconsin Natural Resources Board approved exchanging 4.6 acres of Kohler-Andrae State Park and a nearly 2-acre easement for 9.5 acres of Kohler Co. property. The park land the company would receive includes a rare dune system and wetlands that support threatened and endangered species.

The company wants to add a "world class" 18-hole golf course, up to 16,000-square-foot clubhouse, 22,000-square-foot maintenance facility and other amenities similar in size to its Whistling Straits course that recently hosted the Ryder Cup.

Kohler’s proposed golf course would involve destroying nearly four acres of wetlands, as well as remove half the trees on the property to allow for views of Lake Michigan. The company intends to create or restore wetlands elsewhere in exchange for those that would be filled.

Friends of the Black River Forest opposed the destruction of the rare ecosystem and sued the DNR and its policy-setting board, arguing the land swap violated rules over selling or disposing of state park property. Then-Attorney General Brad Schimel and the DNR moved to dismiss the case and Sheboygan County judge Edward Stengel found the group had no standing to sue over the land exchange.

Last fall, the Wisconsin Court of Appeals reversed that ruling, finding the Friends of the Black River Forest could suffer "recreational, aesthetic and conservational injuries" from the land swap.

In oral arguments before the state Supreme Court, Christa Westerberg, attorney for the citizen's conservation group, argued the group has standing to challenge the land swap because of the project's impacts, including loss of state park access.

"There are aesthetic impacts. There’s the loss of habitat for wildlife and plants the Friends enjoy and there is impacts from increased traffic and noise," said Westerberg.

"You've alleged other things that Kohler might do or other things the DNR might do as far as approving permits. All of that could certainly cause an injury," said Bradley. "In fact, I think what Judge Stengel is getting at is that this decision, in and of itself, does not injure your clients in any way."

Westerberg argued the land swap doesn’t have to result in immediate injuries for the group to have standing in the matter, noting the Friends would’ve had no other opportunity to challenge the disposal of state land.

Eric Shumsky, attorney for Kohler Co., argued the group hasn’t sufficiently established standing that shows they sustained direct injuries from the land swap because construction of the golf course wasn’t part of the decision.

"The DNR’s decision to authorize the land swap doesn't consider, and it doesn't authorize, any construction," said Shumsky. "Construction is far in the future. And it depends on future agency decisions to be made independently under different legal standards."

Without boundaries, Shumsky argued "anyone can sue for anything that they don’t like."

Westerberg contended state law allows people to challenge administrative decisions that affect the "substantial interests" of any person. Gabe Johnson-Karp, attorney for the DNR and its policy board, argued state law guiding sale of state-owned lands doesn't indicate that lawmakers have authorized claims against the board's decisions.

Justice Brian Hagedorn said the notion that anybody could challenge almost any state action they view as negatively impacting their enjoyment of the environment "could be almost limitless."

"It strikes me as a very big net," Hagedorn said.

It's unclear when the court may issue a ruling in the case.

In a press conference prior to the arguments, Mary Faydash, president of the Friends, said citizens should be allowed to protect public lands that they use and enjoy.

"It isn't hard to imagine what would happen to our parks if the DNR could sell, swap or giveaway these treasures of our state," Faydash said.

A consultant for the company estimates the proposed golf course would create 227 jobs with a $21 million annual economic impact on Sheboygan County residents and businesses.

The Kohler Co.'s plans to build its third championship golf course have come under scrutiny for approvals granted under former Republican Gov. Scott Walker’s administration. Wisconsin Watch reported in 2018 that DNR staff felt pressured to sign off on a wetlands permit for the project. The investigative news outlet also reported that human remains of Native Americans from thousands of years ago were found during excavation of the 247-acre site.

The company has maintained that it’s committed to building the golf course in a way that respects the natural resources and remains found on the property. The project has also faced challenges as rising water levels on Lake Michigan have eroded the site.