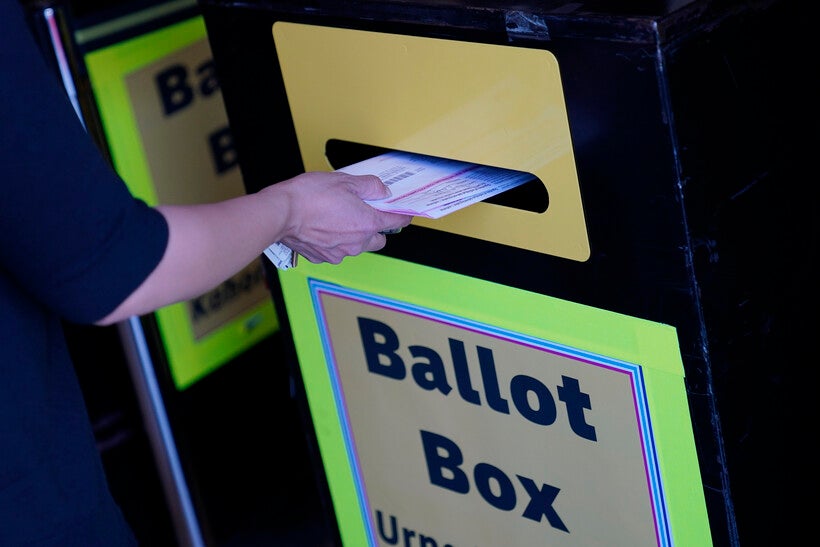 In this Oct. 29, 2020, file photo, a person places a mail-in ballot in a drop box at the Clark County Election Department in Las Vegas. John Locher/AP Photo

An attorney for a conservative law firm told the state Supreme Court on Wednesday that only a voter can return their absentee ballot in Wisconsin, meaning it would be illegal for someone's spouse or child to deliver their completed ballot to the clerk or drop it in the mail.

The assertion prompted extensive questioning from justices who are being asked to decide key ground rules for absentee voting in this year's elections, with the court's liberals suggesting the argument was "absurd."

The case heard Wednesday is an appeal of a ruling handed down in January by Waukesha County Circuit Court Judge Michael Bohren, who sided with conservatives in a lawsuit filed by the Wisconsin Institute for Law and Liberty, known as WILL.

Bohren ruled unstaffed absentee ballot drop boxes are not allowed under state law and directed the Wisconsin Elections Commission to withdraw its guidance to clerks on how to use them. Bohren's ruling also found voters must return their absentee ballots themselves, either by placing them in the mail or returning them to their clerk's office.

The outcome of the case likely hinges on conservative swing Justice Brian Hagedorn, who has cast the deciding vote in some of the state's most politically consequential lawsuits over the past two years.

During arguments, Hagedorn asked WILL president and general counsel Rick Esenberg to drill down into the fine details of the case, from where voters can return their ballots to who can handle them.

"If I'm mailing an absentee ballot, and my wife takes the three steps to put it in the mailbox rather than me, have I violated the law?" Hagedorn asked Esenberg. "Do we need to decide that question?"

"I think you do," Esenberg responded.

Justice Jill Karofsky, one of the court's three liberals, asked Esenberg another version of the same question.

"Within the meaning of the statute, no," Esenberg replied. "Because you've given the ballot to somebody else."

"Mr. Esenberg, I know – I'm sure you can appreciate how absurd that result is," Karofsky responded.

"No, it's not absurd," Esenberg said.

"That fits the bill for me, I have to tell you," replied Karofsky.

Esenberg argued that because WEC guidance on returning absentee ballots did not limit who could return them, it opened the door to paid party activists and volunteers gathering ballots and placing them in mailboxes.

WILL also argued WEC was wrong to offer guidance to clerks on how to use unstaffed absentee ballot drop boxes in Wisconsin because state law does not specifically allow for them.

While WILL won its case in circuit court, the consequences of that ruling remain unclear. Also while WEC rescinded its drop box guidance, the issue of how to handle drop boxes has been interpreted differently by the 1,850 municipal clerks who run elections at the local level.

Charles Curtis, an attorney representing the Democratic Senate Campaign Committee, told justices that the lower court's ruling was specific when it came to drop boxes.

"It's important to emphasize that the circuit court did not forbid the use of all drop boxes," Curtis said. "To the contrary, it ruled that drop boxes are perfectly legal, if — No. 1 — they're they're located at the office of the municipal clerk or a properly designated alternate site, and — No. 2 — are staffed by the clerk. Plaintiffs have not challenged that part of the circuit court's ruling on appeal and have conceded that drop boxes are perfectly lawful in these circumstances."

"Whether they're lawful or not is a question of law," interrupted conservative Justice Patience Roggensack. "I'm sure you realize we don't accept concessions of law from parties. That's our job to decide what the law requires."

Just how specific the court plans to get on this issue could again come down to Hagedorn. During another line of questioning with Esenberg, Hagedorn wanted to know when an absentee ballot would be considered properly delivered.

"Imagine you're in the municipal clerk's office, business hours, staff is present. And there's a slot where you put a ballot. Is that OK?" Hagedorn asked.

"I think it might depend where the slot is," Esenberg replied.

Whatever the court decides could be significant in a swing state with a penchant for close elections, where absentee voting has been widely embraced by voters.

While it's unclear how many voters used drop boxes in the last election, roughly 2 million residents voted absentee, shattering the previous record.

According to the Wisconsin Elections Commission, there were 570 absentee ballot drop boxes being used in Wisconsin by last spring, spanning at least 66 of Wisconsin's 72 counties.

Disability Rights Wisconsin, which is fighting the lawsuit, argues it would disproportionately disenfranchise older residents and people living with disabilities who can't return absentee ballots themselves.

The state Supreme Court initially stayed the Waukesha County Court's ruling for the February primary, but justices allowed it to take effect for the April election. Both orders were decided 4-3, with Hagedorn casting the deciding vote.