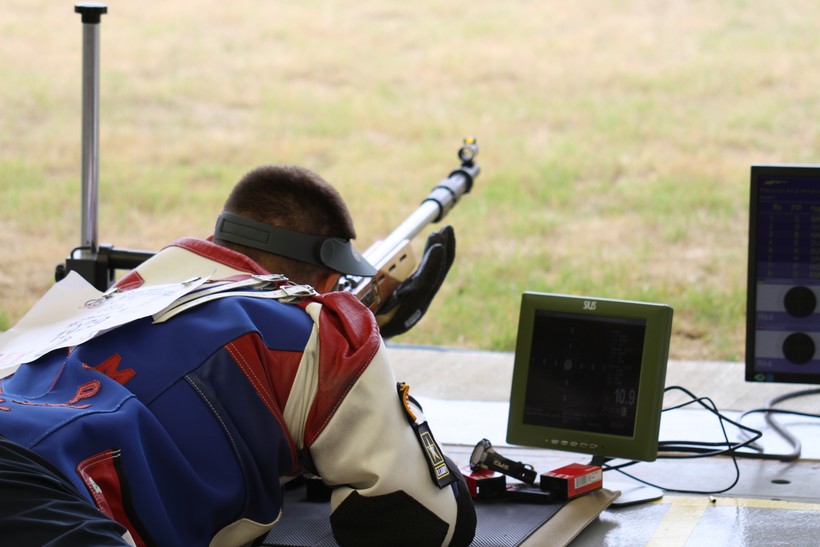 Sgt. 1st Class Michael McPhail first tried shooting when he was about 15 years old. His cousin was heading to the Darlington Rifle Club and he thought he’d tag along to see if he liked it. Not only did he know everyone at the club, but he had a lot of fun.

"Really quickly, in a couple of months, I realized I was pretty decent at this," said McPhail.

McPhail attended University of Wisconsin-Oshkosh and competed on the school’s NCAA rifle team against schools like Purdue University and the University of Michigan. On the weekends, he continued to compete individually.

"I could call my mom and dad to let them know I was passing through town on my way to a competition," McPhail said. "They were the first to get in the car and the last to get out. The support from my folks was pretty special."

Fresh out of college, McPhail competed in the 2004 Olympic trials. But after he didn’t make the Olympic team, he joined the U.S. Army Marksmanship Unit.

"When I shot in the trials, I was leading after the first day. Then I thought, 'I really am good at this,'" McPhail said. "I wanted to see how far I could go, how good I could get at one thing if I put everything into it."

McPhail honed his skills with the Army. As a member of the Marksmanship Unit’s International Rifle Team, he competes internationally, coaches children and helps the Army get better at shooting.

And McPhail himself has improved.

On top of numerous medals and awards, he competed in the 2012 Olympic Games in London where he finished ninth. He’s qualified once again, and will be competing in the 2016 Olympic Games in Rio de Janeiro in the men’s 50-meter rifle prone.

The shooters are 50 meters from their target, don’t use scopes and compete outdoors, no matter the weather conditions.

"Your shot can be impacted by the wind, the rain," McPhail said. "The lighting is something. If it’s a really sunny day and the sun shines on the target, it appears smaller. If it’s cloudy, it can appear larger. It’s really a challenge."

While stationed at Fort Benning in Georgia, McPhail has been sticking to his usual routine to prepare for the Olympics. He said he feels pretty good going into the Games, that he’s been shooting and competing well and there’s nothing more he can do to prepare.

"We’re talking a difference of millimeters," McPhail said. "Nobody’s rifle shoots at the same place every time. It doesn’t happen, they’re not that accurate. You still need a little luck, hope I get a whole bunch of it."

McPhail is scheduled to compete Friday, Aug. 12, in the Olympics.