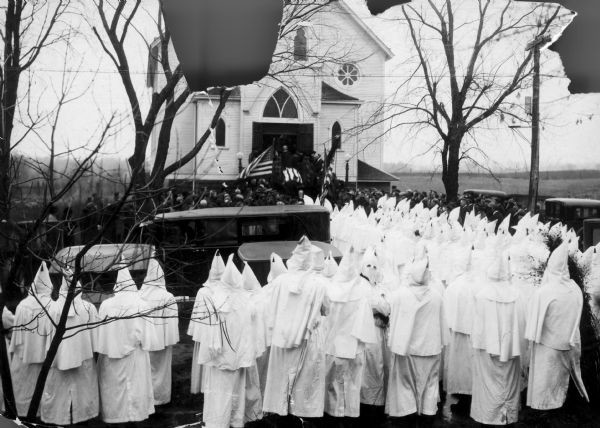 Klansmen of the Ku Klux Klan (KKK) wearing conic masks and white robes gather in front of St. James Lutheran Church, Verona, for the funeral of Herbert C. Dreger, a police officer who was shot and killed in "Little Italy" (South Murray Street). Dreger was shot to death Dec. 2, 1924.

Recent white nationalist events in Charlottesville, Virginia, and elsewhere have led many states, cities and institutions to reevaluate their own history, including the University of Wisconsin-Madison, which was once home to Ku Klux Klan student groups. The Klan has been active in Wisconsin for nearly a century.

The Ku Klux Klan (KKK) formed in 1866, just after the Civil War, by Confederate veterans in Pulaski, Tennessee. By 1870, the KKK spread to nearly every southern state and became the primary vehicle for white resistance to political, social and economic equality for blacks.

Wisconsin saw its first KKK activity in the 1920s as part of a resurgence of Klan activity across the country that had begun in 1915. Fears of communism and disloyalty after World War I led KKK members to proclaim themselves defenders of Americanism. They claimed Catholics, Jews, African-Americans, immigrants, freethinkers and radicals as enemies.

Milwaukee insurance broker William Wieseman helped organized and lead the city’s chapter in 1920. Four years later, the local chapter had more than 4,000 members and a clubhouse. Chapters had also formed in Madison, Racine, Kenosha, and Oshkosh with recruiters working around the state.

The Klan’s anti-Catholicism drew many Wisconsinites. Many of the state’s recent immigrants were Catholic, from southern and eastern Europe.

In Madison, the Klan promoted itself as a force for order in immigrant neighborhoods, particularly the Greenbush. The local chapter formed in semi-secret in 1922 as "The Loyal Businessmen’s Society." They quietly recruited new members and held initiation ceremonies all over the state.

The Greenbush area had a reputation for crime. Newspaper stories stoked fears about a "rum war" between rival Italian gangs for control of the bootleg liquor trade. Add to this a bust of brothels that found six alone in the neighborhood and many people in Madison believed only the Klan could rid the city of these crimes and criminals.

The Madison chapter became more visible over the next two years. In 1924, they convinced the mayor to issue a permit for a parade through the city. Unmasked Klan members marched through town to the Capitol Square.

The Klan was already in decline in Wisconsin by 1925, membership wracked by internal divisions. Unlike members in other states, the Wisconsin KKK mostly operated through secret actions and proclamations rather than overt violence.

Although the KKK had disappeared from Wisconsin by 1928, the Klan rose again throughout the nation, including Wisconsin, in the 1960s and 1970s in response to the Civil Rights Movement. The Southern Poverty Law Center has identified several hate groups still active in Wisconsin to this day.