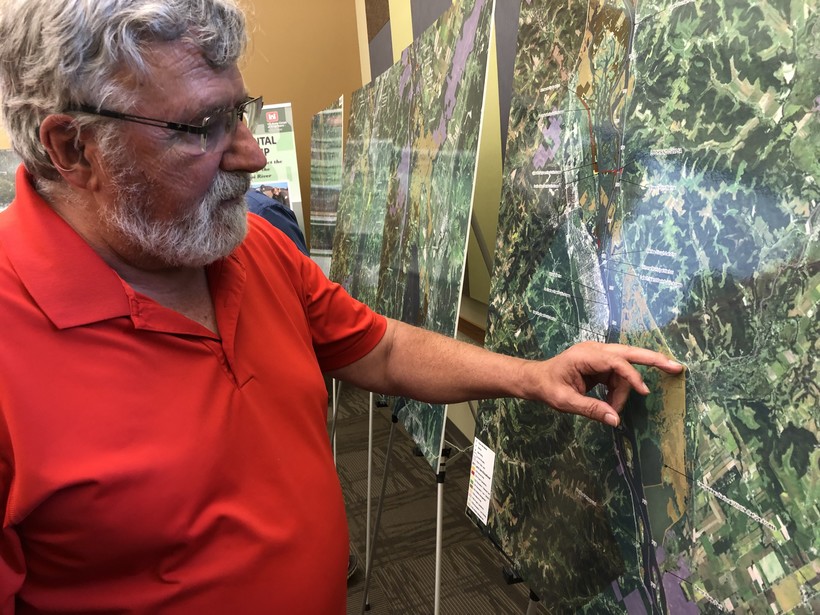 David Danzinger of Alma, Wisc. points to areas where Buffalo County hopes to add new bike trails along the Mississippi River during a public meeting held by the U.S. Army Corps of Engineers. Hope Kirwan/WPR

US Army Corps Of Engineers Asks For Public Insight As It Revises Recreation, Environmental Master Plan
By Hope Kirwan
Share:

Alma resident David Danzinger serves on the Buffalo County Board of Supervisors. For years, he's been working to develop a set of bike trails in the county. He, along with several others, attended a public meeting in Onalaska on Tuesday evening to weigh in on how the U.S. Army Corps of Engineers manages public lands along the Mississippi River.

"These bike trails do in spots touch the river and could actually have little trails running off," Danzinger said. "So I wanted to make certain that this would be approved use of that (land)."

The Corps is working to update their master plan for recreation and natural resources on the Mississippi river.

The plan covers 240 miles of river and 52,000 acres of land between Minneapolis and Guttenberg, Iowa. It identifies which areas are reserved for wildlife and where certain kinds of public recreation are allowed.

Megan O’Brien, plan formulator for the Corps, said the master plan’s maps were updated in 2011, but it hasn’t been fully revised since 1988.

"Recreation has changed a lot. I can’t imagine in 1988 that they would think that folks would be fat tire biking or ATV use or things like that would increase," O’Brien said.

O’Brien said the Corps has also noticed more passive recreation like birding and hiking on public lands. She said the plan hopes to provide opportunities for all users in both urban and rural areas.

Residents at the public meeting submitted comments on boat landings, access problems from railroad infrastructure and the impact of flooding.

Steve Buttell said he's concerned about the deterioration of river islands around his boathouse near Brownsville, Minnesota.

"Boats now have gotten much bigger on the water here. A lot of the islands are falling apart and it kind of affects the main channel and some other things that we'd just like to see if they can restore," Buttell said.

Buttell said he appreciates the opportunity to weigh in on the Corps’ plan because his family has a generation connection to the Mississippi River.

The Corps is taking public comment online or by mail to their St. Paul District office. O’Brien said the agency hopes to release a draft of the plan later this year and have the new master plan in place by 2020.