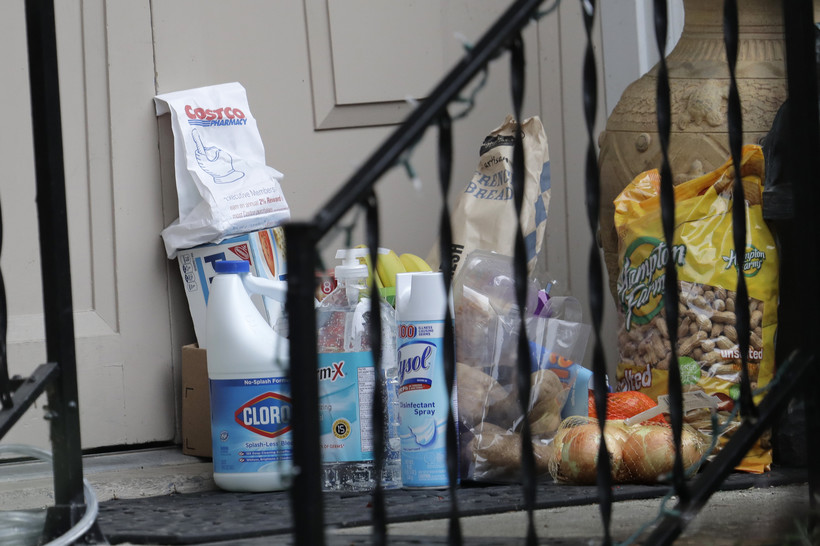 Groceries, cleaning supplies, prescription medicine and other items are shown on the front porch of the home of Bob and Pat McCauley, Friday, March 6, 2020, in Kirkland, Wash. The items were left by their daughter, who is avoiding close contact with her parents since they began being self-quarantined in their. Ted S. Warren/AP Photo

Officials: All Wisconsin COVID-19 Quarantines So Far Have Been Voluntary
By Laurel White
Share:

Individuals who violate a medical isolation or quarantine order in Wisconsin could be put in jail for up to nine months and fined up to $10,000, according to state law — but officials say that kind of enforcement has been unnecessary at the current stage of the novel coronavirus’ spread in Wisconsin.

Three cases of novel coronavirus, or COVID-19, have been diagnosed in the state and government health officials have yet to issue community quarantine orders.

Instead, quarantine and isolation have been limited to diagnosed patients and individuals who have been in contact with them. According to state health officials, those quarantines have also been voluntary.

"The request to self-quarantine has been just that — a request," said Jeanne Ayers, a state health officer, on a briefing call with reporters Tuesday morning. "If we have a person who is flagrantly ignoring that request, we would look at our other legal options."

Those legal options include the potential for steep fines and jail time.

Under one state law, any unauthorized person who "enters a quarantine or isolation premises" would be subject to a fine of up to $10,000 and as many as nine months in jail.

That law also allows government officials to "employ as many persons as are necessary to execute his or her orders and properly guard any place if quarantine or other restrictions on communicable disease are violated or intent to violate is manifested."

Those guards, referred to as "quarantine guards" in the statute, would have "police powers, and may use all necessary means to enforce the state laws for the prevention and control of communicable diseases."

A second state law bars people who know they are infected with an illness from ignoring quarantine orders. The penalty for breaking that law is a fine of up to $500 or up to 30 days of jail time.

Ayers said she couldn’t answer a question about whether the state would begin issuing fines in the future, particularly if widespread, community quarantines were instated.

"That’s many steps down the road from where we are at this point in time," she said. "Some of the things they’ve done in China aren’t things that we would do here. I think we’re moving along with this self-participation and self-isolation and if conditions change, we would address those (possibilities) then."

China received some pushback from experts for its quarantine efforts, which included building mass quarantine centers.

State health officials said Tuesday that Wisconsin residents have been very cooperative with quarantining so far — including many individuals who have self-imposed quarantines after traveling.

"We’re still working on containment, and that’s why we’re so appreciative of the people doing this work," Ayers said. "They’re paying the personal price of not going to work and not going to school and really upending their life and that’s why that’s been such a gift to friends, neighbors and other citizens in Wisconsin."

"It really requires a spirit of collaboration," Westergaard said during the media briefing. "We have to all work together."

Ayers said community members can encourage self-quarantining by continuing to communicate with individuals who have placed themselves in isolation. She also suggested doing things like dropping off groceries for individuals under self-quarantine, when possible.

"It is a community effort," she said.