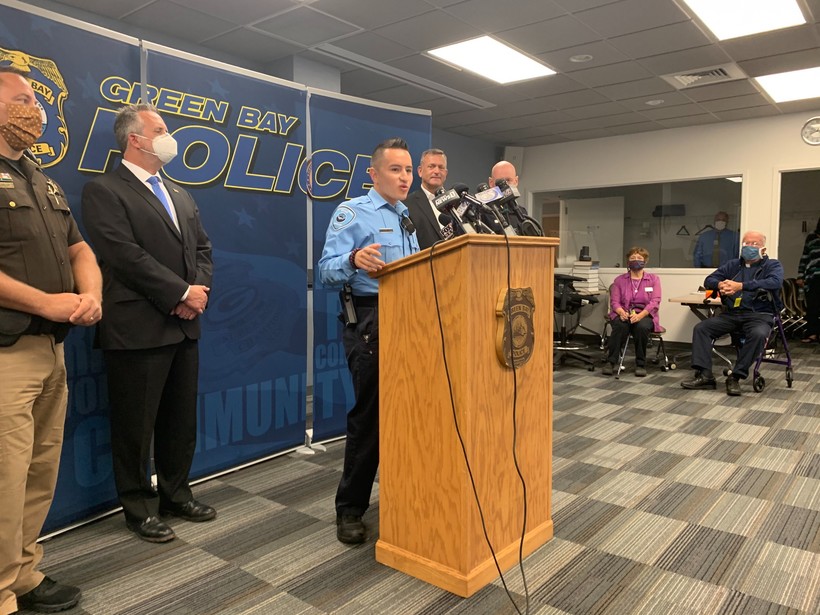 Jose del Rio has been involved with the Green Bay Police Department for years. He spoke at a news conference on Sept. 2, 2020, to discuss new legislation could allow him to become an officer. Green Bay Police Chief Andrew Smith warned other Wisconsin police departments not to poach him. Megan Hart/WPR

Jose del Rio has spent most of his life in Green Bay. His family came to the United States from Mexico when he was just 2 years old.

It wasn't until high school that what it meant to be an undocumented immigrant hit him, he said. His friends started getting their driver's licenses, then jobs. He wasn’t allowed to have either.

"When people say that I'm not American, that kind of hurts my feelings a little, but I've always told myself, 'with struggle comes strength,'" he said.

Growing up, Del Rio participated in the Green Bay Police Department’s explorers program, eventually leading it as captain. He interns with the department, and he studied to become a firefighter.

Now 21, del Rio has received Deferred Action for Childhood Arrivals status, so he can legally work in the U.S. And he’s hoping new legislation will help him achieve his dream of becoming a Green Bay police officer.

"I kept saying, 'I’m not going to let this stop me. I’m going to keep pushing forward and keep being the voice of other individuals that maybe don’t have the opportunity,'" he said.

At a news conference at the Green Bay police station, Reps. John Macco, R-De Pere, and David Steffen, R-Howard, introduced a bill Wednesday that would allow legal residents to become police officers and sheriff's deputies in Wisconsin. Currently, those roles are only open to U.S. citizens.

His department is authorized to employ 194 officers, but it only has 179 because it’s difficult to find qualified candidates, Smith said. In addition to aiding with recruitment, he said he thinks the bill will help make Wisconsin police departments more representative of the communities they serve.

Smith said he’s known del Rio for years and warned other police chiefs against trying to poach the aspiring officer.

Brown County Sheriff Todd Delain also spoke in support of the legislation, and said he thinks many Wisconsin sheriff’s departments will get behind it. The bill would allow sheriffs and police chiefs to change their hiring policies relating to legal residents, but not require them to do so.

Steffen said it could ultimately impact thousands of young people in Wisconsin who aren’t U.S. citizens.

Police and sheriff’s offices operate independently, but must follow statutes that apply to the Wisconsin Department of Justice, including the citizenship requirement. The state patrol is part of the state Department of Transportation, he explained.

Macco said he hopes the bill will receive bipartisan support, noting it will likely be one piece of a larger effort to address police reform in Wisconsin.

So far, the Republican-led legislature has been slow to move on the issue, despite months of protests across the state.

Last week, Assembly Speaker Robin Vos, R-Rochester, announced the creation of a speaker’s task force on racial disparities, educational opportunities, public safety and police policies. This legislation could be taken up by the group, Macco said.

"There’s a lot of clamor to just take action and do something now, and I understand that and I respect that. But I think doing the right thing is better. We can either be good or we can be fast, and I’d rather be good," he said.

Editor's note: This story was updated to clarify that Wisconsin police and sheriff's offices are independent agencies subject to laws that apply to the Wisconsin Department of Justice, including the statute that requires officers to be U.S. citizens.