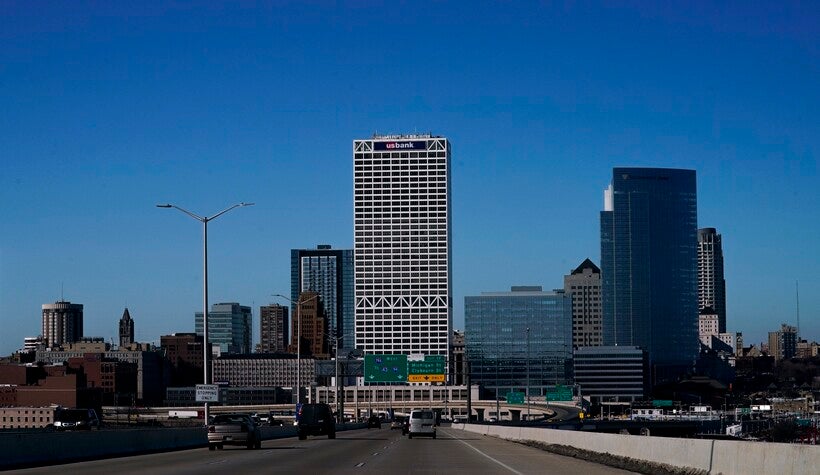 Wisconsin officials say there will be enough visitors to go around during the Democratic National Convention next summer. But Illinois is expecting an economic boon.

Hotel assignments for delegates were released this week with 26 of the 57 delegations assigned to hotels in Rosemont or Lake County, Illinois. The Illinois-based Democrats are from states with larger delegations including Florida, California and Pennsylvania.

About 5,000 hotel rooms will be in Illinois, according to the Democratic National Committee (DNC).

But Milwaukee Bucks executive Alex Lasry, who chaired the Milwaukee Democratic National Convention bid committee and heads the nonprofit group raising up to $70 million to support the convention, said it doesn’t matter.

"The state delegations are just a small part of the 50,000 people (who) are going to be coming into Milwaukee and staying in and around Milwaukee/Wisconsin area," Lasry said. "What we are really seeing is a convention like this bringing so much attention and people leading some people needing to stay in Illinois just to come to Milwaukee."

Lasry sad the DNC knew this would be a regional convention and he expected it would spill into Illinois. Rosemont, Illinois is 81 miles from the Fiserv Forum in downtown Milwaukee, or about an hour and 21-minute drive, without traffic. Lake County is 50 miles away. 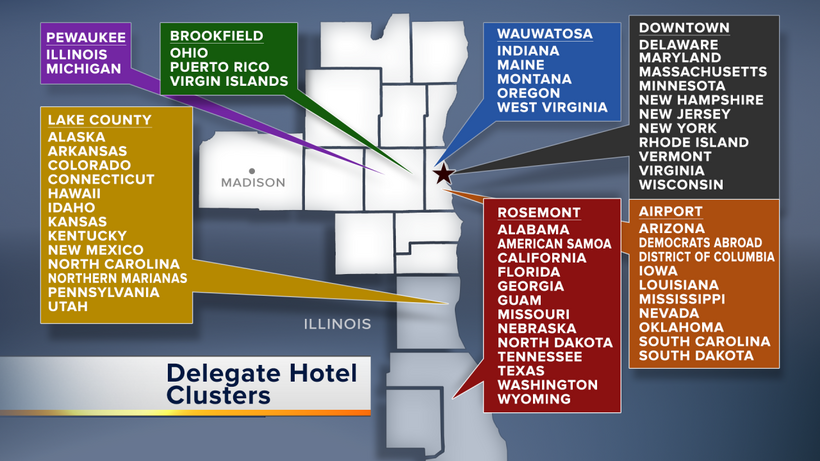 A complete list of hotel assignments for the 2020 Democratic National Convention. Map courtesy of TMJ4

The DNC chose Milwaukee over Miami and Houston to host their 2020 national convention in March. The convention will be held at the Fiserv Forum from July 13-16.

This will be the first time in more than a century that Democrats will gather in a Midwest city, other than Chicago, to nominate their presidential candidate.

When the DNC made the announcement, Milwaukee officials estimated the convention would have a $200 to $300 million economic impact on the state.

Lasry said that is still the case.

"It’s going to be 50,000 people coming into the Milwaukee area, with over $200 million of economic impact and if that means we are able to spill into economic impact, I think that’s great," Lasry said. "It shows the impact and the closeness of these two states and how much more we need to be working together because when one city succeeds the other is going to."

Lasry said every effort will be made to make the convention a "Made in Wisconsin, Made in Milwaukee" event. Including using Wisconsin-based bus companies to bring the delegates to Milwaukee daily.

"Where we have opportunities to use Wisconsin-based businesses, we are going to," Lasry said. "Just because someone is staying in Illinois, doesn’t mean they have to use an Illinois bus to get to Wisconsin. They are able to cross state lines."

Maureen Riedy, president of the Lake County Convention and Visitors Bureau, said this week’s hotel announcement was not a surprise — and that there will be more than 20 hotels used in the county.  She said Lake County worked with Visit Milwaukee on its bid for the convention.

Riedy is expecting the delegates to stay in Lake County until late in the day, giving Lake County restaurants and attractions a bump in business.

"Some will bring their families and Lake County has a lot of opportunities for families, so I think there is a real opportunity here to get a lot of business from the convention," she said. "I think it will have a tremendous impact on this area by virtue of the hotels and the attractions we have, Six Flags, and the other tourist attractions we have."

While Milwaukee, Brookfield, Pewaukee, Wauwatosa and the area near Milwaukee General Mitchell International Airport will host delegates, other parts of the state won’t.

Racine and Kenosha counties, south of Milwaukee, didn’t get any delegates.

Dave Blank, president of Racine County’s visitor’s bureau, Real Racine, said that’s because the criteria was full-service hotels with an attached bar and restaurant. There are two of those in Racine. One hotel didn’t participate and the other only offered a small room block, Blank said.

Still, Blank anticipates the convention being an economic win for Racine and Kenosha counties. His hotel operators are telling him rooms are filled with members of the media and others coming to the convention.

"They spend money too, just like the delegates," Blank said. "And they have more free time. We hope to maximize what they do and how they spend their free time in Racine County."