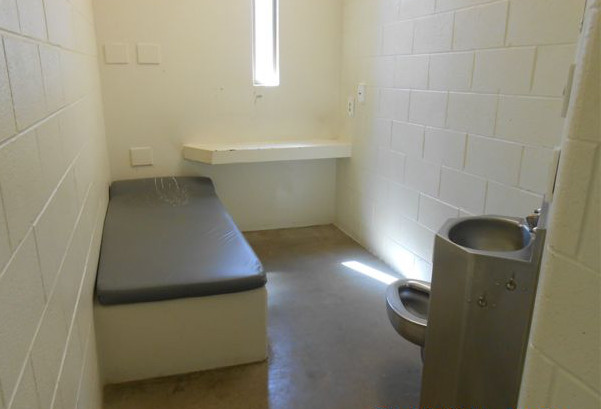 A segregation cell in a state prison in Waupun. Photo courtesy of Wisconsin DOC.

Wisconsin has begun to follow the lead of other states in reducing the use of solitary confinement to discipline prison inmates, but prison reform advocates say they want the practice curtailed even more.

Recently, the Wisconsin Department of Corrections agreed to release documents and answer questions about the solitary confinement changes as part of a settlement in an open records lawsuit filed by the Wisconsin Center for Investigative Journalism. Officials described the changes in an interview with WCIJ and Wisconsin Public Radio.

Administrator of Adult Prisons Cathy Jess said the changes are in line with what is going on in other states.

"Things change. The pendulum swings with corrections depending on the public’s opinion, how laws get passed and other things, but I think it’s a culture change in how we do business," Jess said.

In July, President Barack Obama called for such a culture change during a speech to the NAACP. Obama said solitary confinement has been shown to be counterproductive: "An environment like that is often more likely to make inmates more alienated, more hostile, potentially more violent. That is not going to make us safer."

In Wisconsin, members of WISDOM, a group pushing for changes in the prison system, agree with the president. They have been calling for an end to solitary confinement, especially for inmates who suffer from serious mental illness.

"We’ve been discussing more ways of keeping guys out of that. To just reduce our overall numbers, our overall length of stay, to focus on safety and security rather than punishment," Kallas said.

The new policy establishes a 90-day maximum initial term in solitary. Kallas said there’s a concerted effort to help inmates earn their way out of solitary. The policy allows inmates to cut their time in segregation in half through good behavior.

"So rather than ask what have they done to get there," Kallas said, "it's, 'Why can’t they go? What’s holding us back?'"

Kallas said staff are being encouraged to negotiate with inmates now before sending them to solitary for breaking a rule. He said that’s led to a drop in the number of inmates in solitary over the past 16 months from 1,400 to just under a thousand.

"We want to progress guys as fast as we can and we want to make the experience to be as constructive, instructive, rehabilitative as possible, and obviously that’s a work in progress," said Kallas. "I think we anticipate and we hope that as these policies, this change in culture continues to take effect, those numbers are going to continue to go down."

But it’s not enough progress, according to Reverend Jerry Hancock of WISDOM.

"Even with the changes that are being proposed, Wisconsin is still way behind other states in reforming solitary confinement," he said.

Hancock points to Colorado, where the prison system is now led by Wisconsin’s former Corrections Secretary Rick Raemisch. Raemisch has made it a priority to reduce the number of inmates in solitary, focusing especially on inmates with mental illness.

In other states, Hancock said, like Maine and New York, reforms have come in response to lawsuits — something he said may still be necessary to achieve reforms in Wisconsin.

"Elected officials like Gov. (Scott) Walker who have made their reputations by being tough on crime are very resistant to these kind of changes. And it’s only outside pressure that can force them into doing the right thing," said Hancock.

Walker has said he supports the current push to reform the use of solitary confinement, but according to the WCIJ, he has not specifically endorsed the policies now being implemented.