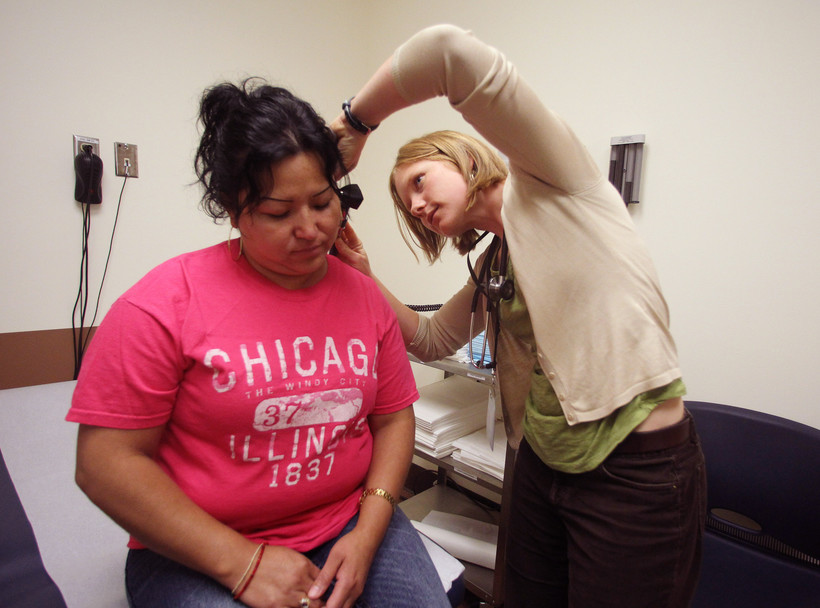 A physician assistant examines a patient at a Portland, Oregon clinic in June 2012. Rick Bowmer/AP Photo

A projected doctor shortage in Wisconsin is spurring efforts to expand the duties of other medical professionals. Physician assistants, or PAs, currently diagnose and treat patients under the supervision of doctors. They, along with advance practice nurses and dental hygienists, may seek changes to state law in the upcoming year to expand their duties.

PAs have been around for a long time. The profession began in the 1960s after a doctor shortage, said Eric Elliot, incoming president of the Wisconsin Academy of Physician Assistants.

"So we’re no stranger to a team-based approach. But for it to work going into the future, we have to identify the limitations and barriers to full practice," Elliot said.

A group representing doctors is waiting to see what a proposal for expanded duties would entail. Dr. Ken Schellhase, the newly chosen president of the Wisconsin Academy of Family Physicians, was one of several speakers at a Wisconsin Health News forum Dec. 6 in Madison.

"I guess we want to make sure that any sort of collaborative arrangement is meaningful," Schellhase said. "It is such a critical piece."

Steve Rush of the Wisconsin Hospital Association said the vacancy rate for PAs has doubled according to their latest workforce report. Many graduates leave for states that are what he calls "more PA friendly" and allow more autonomy, Elliot said.

"The reality of our practice is not that we have a supervisor looking over our shoulder every minute," Elliot said. "What we want to do is bring the legislation and the rules up to pace."

Like PAs, dental hygienists say laws on supervision are outdated.

"Our intent is to revisit the supervision laws, point to the places where we have successfully been taking care of people – public health departments, public private tribal schools and dental schools – without incident," said Linda Jorgenson, former president of the Wisconsin Dental Hygienists Association.

Dr. Dave Clemens, incoming president of the Wisconsin Dental Association, said they expect some expanded scope of practice legislation could come up this year for hygienists. He said they are open to some changes that would help underserved patients but not directly compete with dentists.

"If it’s a totally independent practice and they’re going to go out and do what we do with a very much shorter dental education, we would be opposed to that," Clemens said.

When asked at the forum about collaborative agreements for hygienists, Jorgenson said they already know how to collaborate. That was echoed by the executive director for the Wisconsin Nurses Association, Gina Dennik-Champion. Coordinated care happens because it's in the best interest of the patient, Dennik-Champion said.

"I mean we know what it is but why is it regulated? Why does it need to be regulated? How do you prove it? It’s part of what we do in everyday practice," Dennik-Champion said.

The nurses association is looking at changing a requirement for advanced practice nurses to have a collaborative relationship with doctors.