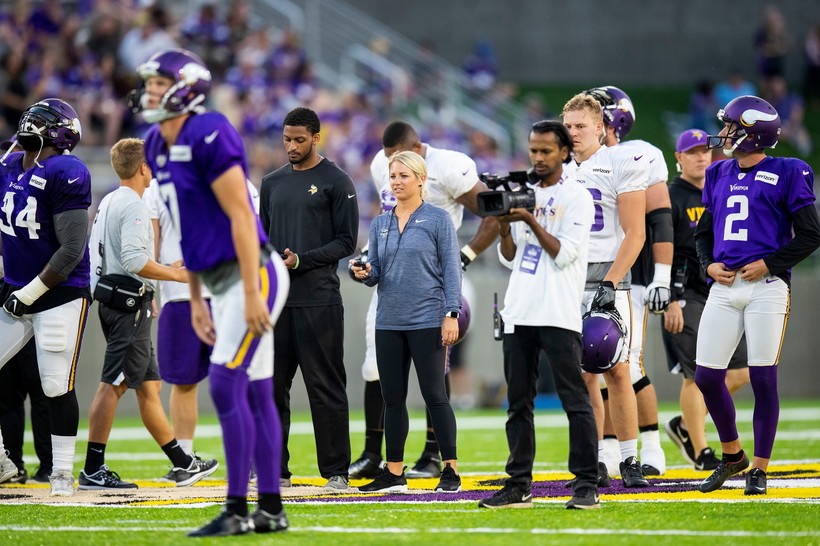 This Wisconsin Native Grew Up A Packers Fan. Now She's A Vikings Scout

The Minnesota Vikings upset the New Orleans Saints last weekend in a wildcard matchup that went to overtime. Plenty of Wisconsinites were likely rooting against the Vikings, a bitter division rival of the Green Bay Packers. But Kelly Kleine wasn’t one of them.

Kleine grew up in Sheboygan, just an hour from Lambeau Field. A multi-sport athlete as a kid, Kleine got into football because of Brett Favre. He’s still her all-time favorite player. But she’s shifted her rooting allegiance from the Packers to the Vikings. After all, as the team’s manager of player personnel, it’s her job to help Minnesota build a winning roster.

Sunday’s overtime win was so stressful, Kleine had to check her heart rate on her watch after the game, she said.

"It was cool because everyone doubted us, you know? So, it was fun to go out there and prove everyone wrong," she said.

Next up, the Vikings face the top-seeded San Francisco 49ers Saturday in a divisional-round playoff game. Kickoff is 3:35 p.m.

Despite the Vikings’ postseason run, the team’s scouting department isn’t slowing down. Kleine is getting ready to travel to college football exhibition games, where NFL hopefuls will aim to showcase their skills for scouts. The team will have draft meetings in February before Kleine and the rest of the scouting staff head to the NFL Combine at the end of the month.

During the college football season, Kleine is responsible for scouting players from Minnesota and the Dakotas, traveling to schools in those states and writing up reports on promising players.

When Kleine was starting out eight years ago, there weren’t a lot of female scouts across the NFL. Recently, however, she’s seen the number of women in coaching and scouting departments increase, she said.

In September, the Wall Street Journal profiled the Philadelphia Eagles. In Philadelphia, more than half of the owner’s advisory committee is made up of women, according to the article.

Kleine comes from an athletic family. She played three sports in high school and both her parents coached youth sports, she said. When she goes back to Sheboygan, her family still hits the links together. She left for college at the University of Minnesota, where she worked in the athletic department. 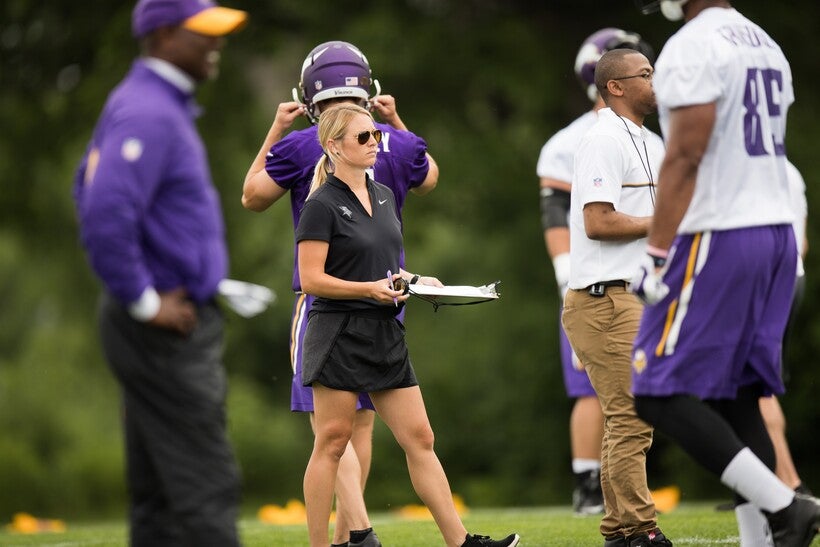 She joined the Vikings organization as a public relations intern, but when an intern from the scouting department quit just two months before the draft, Kleine got an opportunity that changed her life. An internship in scouting turned into a full-time job. Kleine credits her colleagues with helping take her football knowledge to a whole new level.

"Whenever I have a question about a coverage or this or that, I can just go and ask these guys who have been here for many, many years and have that experience," she said.

Back in Wisconsin, Kleine said her family is proud, but they haven’t all converted to Vikings fans. When they traveled to Minnesota for a game against the Packers in December, two out of about 25 people wore purple, she said. But she’s making progress with her mom and her boyfriend, who’s also from Sheboygan, she added.

Kleine may root for the Vikings these days, but she still loves her home state, she said.

"I get crap for it here because I'm still a huge Brewers fan, a huge Bucks fan, but football, I’m Minnesota," she said.