As Wisconsin Lakes Warm, Walleye Are Feeling The Heat
Wisconsin's Most Prized Fish Has Been Declining For Decades
Home
/
On The Table
Monday, March 2, 2020, 6:00am
By
Mary Kate McCoy
Share:

Walleye are a staple of Native American diets, beloved for Friday night fish fries and a popular sporting fish. But the cool-water fish’s populations have been declining for decades, at the same time as largemouth bass have been thriving. Experts say climate change isn’t the only driver of walleye’s decline — but its impact is pervasive. In this series, WPR is exploring how the state can adapt to and mitigate the affect climate change is having on some of Wisconsin’s most iconic foods.

Arguably the most prized fish in Wisconsin, walleye hold a cultural significance that reaches far beyond being a thrilling fish to catch and a delicious fish to eat for the spear fishers and recreational anglers who harvest them.

But walleye populations have been declining for the better part of two decades.

While walleye at a Friday night fish fry haven’t come from Wisconsin in many years, they remain an important food source and tradition for Wisconsin tribes and part of an economically significant pastime — recreational fishing brings in more than $2 billion annually to the state.

Estimates say the sharp tooth predator’s production dropped nearly 30 percent between 1990 and 2012 and takes 1.5 times as long to grow to the same size and weight as it did in 1990.

The Great Lakes Indian Fish and Wildlife Commission (GLIFWC) identified walleye as a moderately to extremely vulnerable species in Wisconsin in its recent vulnerability assessment report.

Researchers point to climate change as a pervasive culprit, but it’s a complicated story with a lot of question marks.

Lakes are complex ecosystems and Wisconsin is home to a diverse variety — lake size and depth, water clarity and surrounding tree cover all influence how lakes respond to climate change.

And temperature affects every corner of a lake ecosystem.

Researchers know Wisconsin lakes aren’t too warm for walleye, a cool-water fish, to survive. They suspect it's a recruitment (surviving to maturity) issue that has more to do with food sources and what species has the competitive edge. 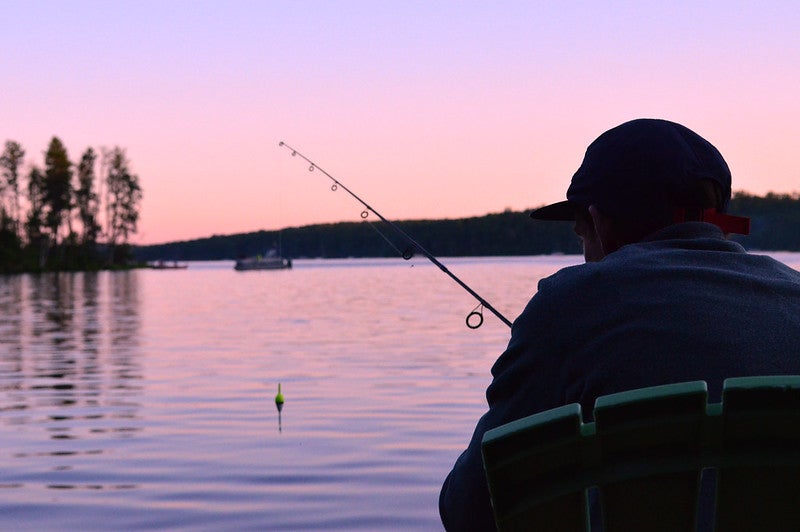 Just how rising temperatures and shorter winters are affecting walleye reproduction is an open research question, Gretchen Hansen, assistant professor in the Department of Fisheries, Wildlife and Conservation Biology at the University of Minnesota-Twin Cities, said, but it’s clear the first summer of a walleye’s life is the most precarious.

The walleye hatch early in the summer, but by the end of the summer large numbers have disappeared — what happened between those events has confounded researchers.

"We don't know what happened to them, but they just don't show up anymore," Hansen said. "Maybe they didn't find enough food, or they got eaten or some combination of both."

Timing is everything. Hansen said there are theories that young walleye aren’t matching up with their food source at the correct time because of changing lake ice patterns, driven by an increase in erratic warm and cold snaps during winter and spring.

"You get better reproduction when … you have kind of a solid straight path towards spring," Hansen said. "Not super variable temperature conditions, and we are seeing more variable conditions with climate change."

David Bissonette, a Lac Courte Oreilles Tribe member and spear fisher, said spear fishers see lakes in a different way than others. They go out at night, with headlamps, in the springtime right after the ice melts.

When Bissonette was a kid, he associated walleye harvesting on Lake Chetac in Sawyer County with his cousin’s birthday, April 19, he said.

"But now ... we've gone after that first week in April," Bissonette said. "And then there also have been a couple times where we haven't really been able to fish until the end of April."

Walleye in Wisconsin generally spawn between mid-April and early May, and when the timing has been off, he hasn’t reached his walleye quota, he said.

Shift In Balance Of Power

At the same time walleye are struggling, another predator species appears to be thriving: the largemouth bass.

Small changes in temperature have a big impact, said Hansen.

"The thing with climate change is everything is affected by temperature — like everything," she said.

"The thing with climate change is everything is affected by temperature — like everything," said Gretchen Hansen, assistant professor in the Department of Fisheries, Wildlife and Conservation Biology at the University of Minnesota-Twin Cities.

But exactly how those changes in temperature affect walleye habitat and reproduction are difficult to tease out. That’s the nature of climate change, she said, it isn’t straightforward.

Wisconsin has already warmed by about 2 degrees Fahrenheit since 1950, and is expected to rise an additional 2 to 8 degrees Fahrenheit by 2050. Increases in extreme and unpredictable weather events and seasonal variability have already shown themselves to be side effects of climate change. 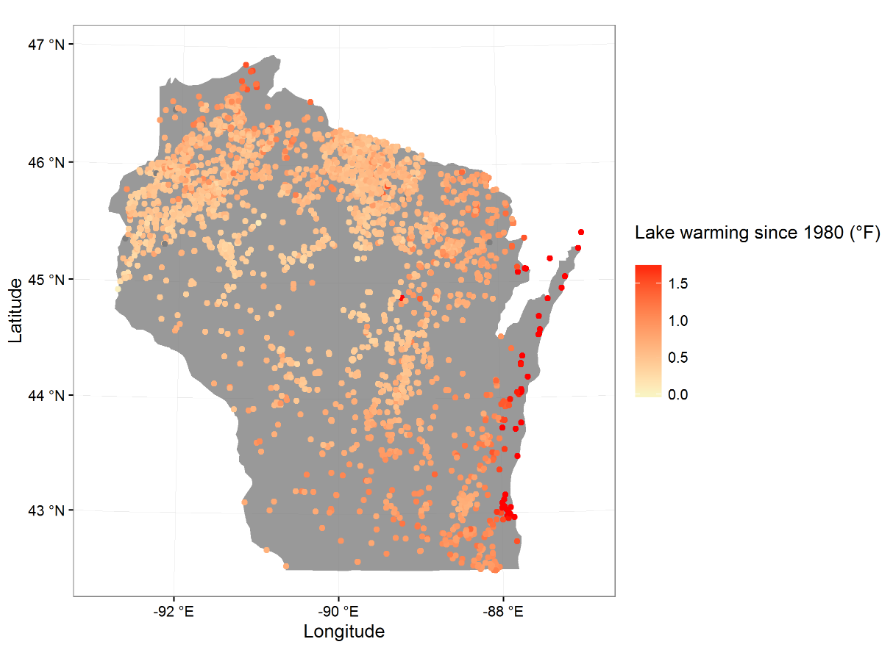 Water temperatures are slower to rise, but some Wisconsin lakes have seen temperatures increase by more than 1.5 degrees Fahrenheit since 1980. And as water temperatures continue to climb, a relatively small number of lakes are expected to support walleye natural reproduction.

The same temperature changes that are making natural reproduction more risky for walleye are tipping the scales in favor of largemouth bass.

Walleye have a competitive advantage in low-light, stained water with limited plant growth. Largemouth bass thrive in warm water and prefer clear water with an abundance of aquatic vegetation.

And while it may not be intuitive, rising temperatures are tied to clearer lakes — warmer and clearer lakes force walleye to swim deeper to be comfortable and reduce their habitat and range for food.

But to date, there’s no direct evidence walleye’s decline comes down to competition between the two predator species.

"They are also a top predator in the system," Shultz said of largemouth bass. "Are they consuming juvenile walleye? Are they competing with them for food? A combination of those things? It's unclear at this point what their role is."

You could also take a step back and begin to understand walleye decline in Wisconsin lakes by looking to their natural habitat — rivers and large lakes connected to river systems.

"We've introduced them through stocking into a lot of lakes," said Greg Sass, fisheries research team lead in the state Department of Natural Resources Office of Applied Science.

"Some of what we're seeing with these declines might just be that these lakes weren't supposed to have walleyes in the first place," he continued.

"Some of what we're seeing with these declines might just be that these lakes weren't supposed to have walleyes in the first place," said Greg Sass, fisheries research team lead in the state Department of Natural Resources Office of Applied Science.

Then, there’s habitat loss on the lakes. Bissonette, of Lac Courte Oreilles Tribe, points to how lakefront properties are managed, like removing shoreline trees and aquatic plants.

"People want ... to change it to how they want it without understanding this lake has been like this for thousands and thousands of years, and the fish that were in here developed in that environment," he said. "But you don’t want to catch a gar, you want to catch a walleye."

But it isn’t all bad news for walleye.

Walleye are doing fine in large Wisconsin rivers, and even in a number of lakes walleye populations are holding their own, particularly in large lakes, which hold more resources, and lakes that are connected to rivers.

And the lakes they appear to be doing best in tend to be the largest and most popular lakes in the state, such as Escanaba Lake in Vilas County or Lake Winnebago in east central Wisconsin.

Walleye populations have been maintained through stocking in many lakes in Wisconsin. But the level of success varies significantly — some lake ecosystems support natural reproduction without help, for others, the only way to have walleye is to stock them.

"Then there's a whole bunch of lakes in between where if conditions are right — if you have a good winter and ice-off is right and the temperature is good — you'll probably get natural reproduction," Hansen said.

"But maybe that’s only happening every 10 years or something, and that's not enough to support fishing," she continued.

Since 2013, the Wisconsin Walleye Initiative has spent millions of dollars stocking hundreds of thousands of walleye each year.

"To me ... you're putting in a lot of effort in many of these systems just to have a put-and-take fishery," Shultz said. "It's a bandaid fix to whatever the larger issue is in the system."

However, Shultz said as part of a more comprehensive management plan, stocking can be successful in rehabilitating the system.

According to the U.S. Geological Survey report on climate change and freshwater fish, walleye won’t completely disappear from Wisconsin waterways even under extreme warming conditions. However, a comparatively smaller number of lakes will be able to support naturally reproducing walleye populations.

"Every species is kind of moving at its own rate in its own direction and influenced in different ways by the species around it ... but we should expect lots of surprises and unique wrinkles as we see the coming decades play out," Williams continued.

If you enjoy bass fishing, times are good. But there’s resistance and few people are focused on bass as an alternative fish to catch and eat — even as regulations for harvesting bass have loosened, Shultz said.

Bass don’t face the same harvesting pressure as walleye do. Whether that’s contributing to walleye’s decline, experts say it could be playing a role, but it’s likely not the driving factor.

"In the particular case of bass, most anglers are releasing all bass right now, even if they are legal sized," Sass said. "That also kind of gives bass an upper hand as well, anglers aren't keeping them like they are walleyes."

"As the lakes change, we'll still eat those other fish. But I feel really bad for who's going to come after us because they're not even going to understand what has been lost," said David Bissonette, a Lac Courte Oreilles member and spear fisher.

Bass don’t hold the same cultural status as walleye do. And as lake ecosystems continue to change, that will likely come up more and more in the future, Shultz said.

"The public, they still want to be able to harvest walleye, that's what you go to the Northwoods to do," Shultz said. "For tribes, it's a tradition to go spearing in the springtime. And that's subsistence for the tribes ... it's part of ceremonies, it’s a tradition, it’s part of the culture."

According to the Ojibwe creation story, there’s an order to how things were created, Bissonette said.

"The first one was the earth. And then after that plants, and then animals and fish and then humans are created last," he said. "Walleye fits into that ... with all of these other beings that exist in the Ojibwe world — they don't need us, you know, we need them."

All fish taste different, Bissonette said, and Ojibwe people have always adapted to the environment.

"As the lakes change, we'll still eat those other fish," he said. "But I feel really bad for who's going to come after us because they're not even going to understand what has been lost."