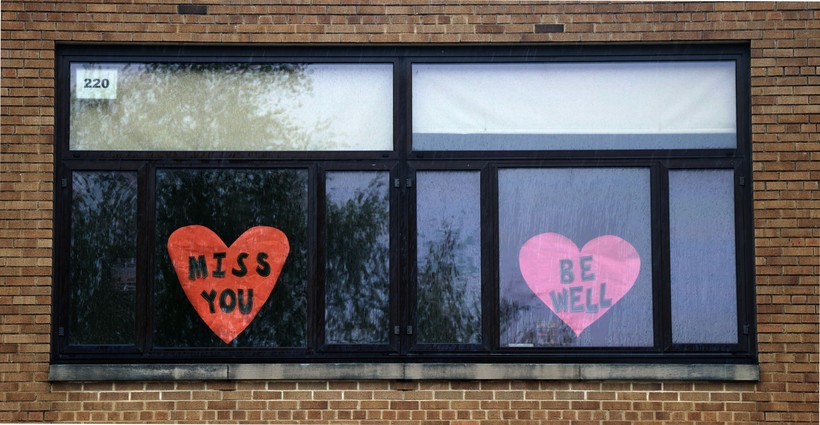 Teachers displayed signs expressing how they miss their students in the windows of Sherman Middle School on Madison’s north side. Steven Potter/WPR

State Spends Less Per-Pupil Than Its Neighbors, Except Iowa
By Madeline Fox
Share:

Between 2002 and 2018, Wisconsin dropped from ranking 12th among all states in how much it spent per-pupil on public K-12 schools, to ranking 24th, according to census data analyzed in a new report from the Wisconsin Policy Forum.

The report is one in a series that have sketched out the financial picture of Wisconsin schools as they gear up for an unusual budget year.

In 2012, Wisconsin's K-12 spending dropped by 6.2 percent in a single year, and its year-over-year increases in how much the state spent per-pupil on public school slowed. By 2015, that slowdown was enough to put it behind the country as a whole, whereas prior to 2012 its per-pupil spending had been increasing faster than in the country as a whole.

According to the report, Wisconsin's spending per-pupil lagged three of its four neighboring states, only spending more per-pupil than Iowa, which ranked 28th.

Wisconsin has lagged behind the country as a whole in per-pupil spending since 2015. Source: Wisconsin Policy Forum

Anne Chapman, the researcher who compiled the report, noted that per-pupil spending mirrored state spending on benefits, which also slowed after Act 10 required teachers and other school employees to contribute more to their pension and health insurance.

"You see the exact same thing, where, relative to the country, Wisconsin's spending is rising, and then in 2012, it goes down considerably, and then it keeps going down until about 2015, 2016, (when) the U.S. actually overtakes Wisconsin in terms of benefits spending," she said.

With teacher salaries, by contrast, Wisconsin lagged the country during the whole period the Wisconsin Policy Forum examined.

Chapman said that Act 10 spending cuts could account for some of the downward trend in per-pupil spending on schools, but not all.

She also said the reduction in benefits spending, coupled with slow growth in teacher salaries, could complicate districts' ability to retain teachers at a time when many are concerned that reopening plans aren't taking their safety seriously enough.

Even as Wisconsin school districts have been girding themselves for tough budget years ahead, there has been some good news. The latest out of the Wisconsin Legislature seems to indicate that lawmakers won't have to go back into its current biennial budget and make cuts — those can wait until the next biennium. That's particularly good news for schools, which were slated to get the bigger portion of their two-year per-pupil increases in school spending in the second year of the biennium.

"The idea that they might actually have to cut in this budget year, that's likely not going to happen now," said Chapman. "So that's good. The question will be how the recession that we're in, the costs associated with COVID, and the uncertainty surrounding any kind of federal assistance, how will this all break down?"

Tom Owens, director of business services at Stevens Point Area Schools, has been a school business manager since 1978, weathering the budget complications that came with several recessions, as well as 2010's Act 10 legislation.

"I tell all my colleagues we have to, number one, muddle through, and number two, remember the root word of the word 'muddle,' and just anticipate that there's going to be a lot of mud, and a lot of confusion, and we're just going to have to work our way through this and just figure it out," he said.

Owens said he's used to a certain amount of uncertainty when he lays out the budget for his district. That initial district-level process happens over the summer. On the third Friday in September, districts count how many students are enrolled and in class, and then in October, revise their budgets based on what they'll get from the state.

"We are several months into our school budget, school year before we even get a lot of the data and are able to even set our levies, so we're not unfamiliar with having to deal with coming from behind or having to figure things out," he said. "This, obviously, is a stellar year for that opportunity. A lot of things are very unpredictable and unknown."

Part of the unpredictability comes from the side effects of adapting to not just a recession, but the demands of a pandemic. Owens said he's expecting more spending on personal protective equipment, on overtime, and on delivery costs for food, for example, but also savings in travel, as COVID-19 has moved meetings and other gatherings virtual.

"Any budget is always wrong, it's just a matter of degree," he said, laughing, "but the budget this year, it's really going to be an interesting challenge for it to come relatively within certain margins of error."