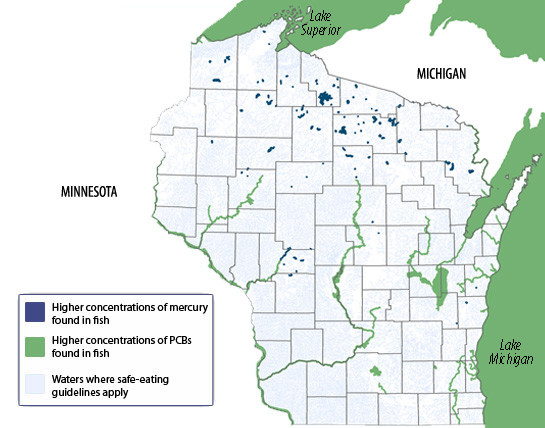 Hundreds of man-made chemicals found in Wisconsin waters may have the potential to disrupt hormones like estrogen in people or wildlife. A new United Nations report calls these so-called endocrine disruptors a "global threat." The Wisconsin Center for Investigative Journalism found that unlike Minnesota, Wisconsin isn't doing much to assess their presence here.

Minnesota is a national leader in hunting for endocrine disruptors in its lakes and rivers. There, researcher Mark Ferrey, with the Minnesota Pollution Control Agency, has found them nearly everywhere he's looked.

Endocrine disruptors include drugs that pass through wastewater treatment plants, or chemicals in urban, industrial or agricultural runoff. They're in plastics, shampoos, even mattresses. Scientists say they could be harming fish and wildlife - and might explain increases in human diseases like cancer, infertility and obesity. But this science is young, and the risks are still unclear.

Wisconsin isn't doing anything on the same scale as Minnesota.

The Department of Natural Resources deals with these chemicals through programs like fish consumption advisories, but has no coordinated approach. The DNR says it's waiting for guidance from the federal government - which has been criticized for being slow to act.

Melissa Malott of Clean Wisconsin says the state should be doing more.

"I don't think that waiting for federal government to act - when there's no sign that they're going to soon - is a legitimate excuse. And because so many of these chemicals are linked to so many different types of cancers, that seems like it should be a high priority."

You can read more about this topic at the Wisconsin Watch report: http://wisconsinwatch.org/2013/04/21/concerns-grow-about-hormone-disrupting-chemicals-in-wisconsin-water/.

Water Watch Wisconsin, a joint project of the Wisconsin Center for Investigative Journalism, Wisconsin Public Radio and Wisconsin Public Television, will examine the quality and supply of Wisconsin's water. We welcome story ideas; please contact us at: water@wisconsinwatch.org.