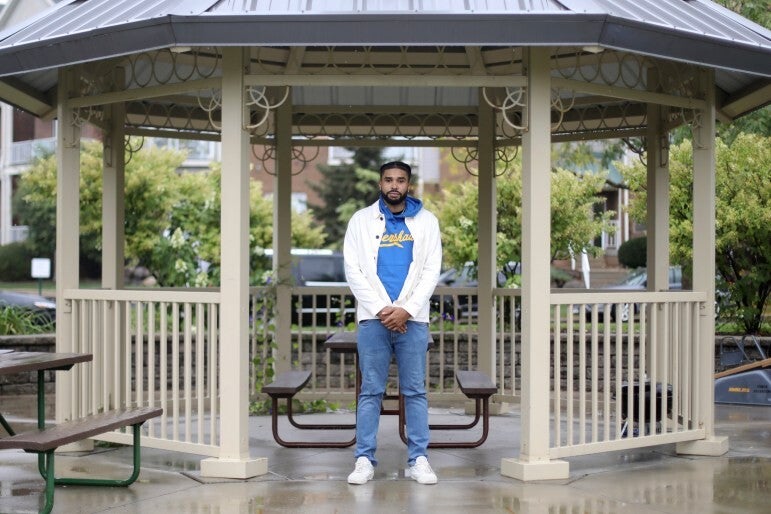 Alfonzo Clayborne was charged with first-degree reckless injury to his 3-month old son, based on the opinion of University of Wisconsin Dr. Barbara Knox that the boy had a leg fracture "from violent shaking or a twist." The charges were later dropped after experts determined the boy’s leg was not broken. Clayborne was photographed in Fitchburg, Wis., on Oct. 7, 2021. Coburn Dukehart/Wisconsin Watch

Before child abuse allegations capsized his life in 2016, Alfonzo Clayborne had his first high-paying job and a new apartment in Fitchburg that he and his new family were turning into a home. He had bought himself and his girlfriend each a car.

Life at then-22 years old was becoming more "stable," he said.

That all vanished one day in June when he found his 3-month-old son unresponsive in his crib. He called the baby’s mother. She came home from work, and together they called 9-1-1.

An ambulance took her and the baby to the hospital. Clayborne followed in his car. But once he arrived, the staff at American Family Children’s Hospital barred him from joining his family.

The hospital’s child protection team told authorities the baby had brain bleeding and a left leg fracture. A physician assistant told police other injuries were possible but not yet confirmed, according to the criminal complaint. 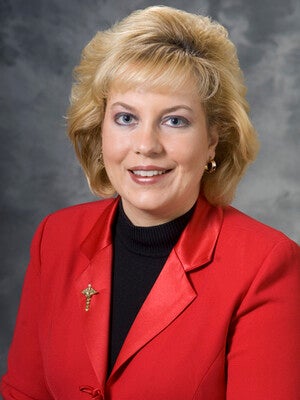 Then-medical director Dr. Barbara Knox had examined and diagnosed the baby. Her physician assistant, Amanda Palm, relayed Knox’s diagnosis to police and told them the child’s injuries were caused by inflicted trauma.

"They said he had a broken leg, or a broken limb, some bruised ribs and a fractured skull," Clayborne recalled. "And I was like, 'There’s no way.'"

The CPS worker asked him if he hit the baby, he said, and proposed scenarios suggesting Clayborne had harmed the child out of frustration. They gave him a stark choice: Either his girlfriend had injured the baby, or he had. Clayborne responded: "It was me."

"The situation was overwhelming, and I was only trying to get it over with. I didn’t know I would end up being charged," he said.

The baby left the hospital with a cast on his leg for a break that it turns out he never had.

Knox once testified that she had never made a mistake in diagnosing child abuse. But Clayborne’s case is one of several examined by Wisconsin Watch in which Knox’s diagnoses of child abuse led to charges that the criminal justice system ultimately rejected. Wisconsin Watch earlier reported on the experiences of seven sets of parents who were investigated — but not charged — for child abuse when none existed.

In two other cases, caregivers are serving prison time in cases launched by Knox.

Jennifer Hancock of Verona is serving a 13-year sentence in connection with the death of an infant in her care. She has appealed her case to the Wisconsin Court of Appeals.

Joshua Gehde of Madison is serving a 20-year sentence after his girlfriend’s toddler died while Gehde was caring for her. Gehde has appealed his case unsuccessfully and is contemplating another appeal.

The families and individuals came forward to tell their stories after a 2020 Wisconsin Watch investigation showed Knox had wrongfully suspected a Mount Horeb couple of harming their 9-month-old son.

UW suspended Knox in 2019 for allegedly bullying her co-workers. She left that year to become medical director of Alaska CARES, a statewide forensic child abuse clinic. Knox reportedly has been placed on leave by the Anchorage facility, which has seen a mass exodus of staff who say Knox bullied them and leveled wrongful allegations of child abuse, according to a joint Wisconsin Watch/Anchorage Daily News investigation.

Knox did not respond to multiple interview requests, phone calls and an emailed list of findings. 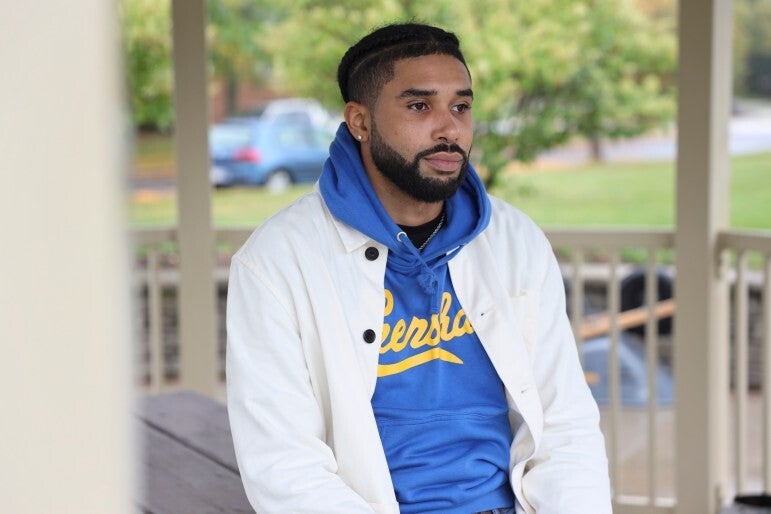 On June 8, 2016, Alfonzo Clayborne and his girlfriend called an ambulance because their 3-month-old son was lethargic. A criminal complaint stated the child had bleeding on his brain and a fracture on his left femur. Clayborne was charged with first-degree reckless injury, but a prosecutor dismissed the case after experts stated the baby never broke his leg and a seizure likely caused his lethargy. Clayborne was photographed in Fitchburg, Wis., on Oct. 7, 2021. Coburn Dukehart /Wisconsin Watch

'I was robbed and kidnapped'

A week after Clayborne was fitted with an ankle monitor, a pediatric orthopedist told the baby’s mother her son never had a fracture, but "a normal variant of the distal femur," according to a court document.

Despite this finding, the momentum of the criminal charge snowballed.

While Clayborne’s lawyer, Bill Jones, tried unsuccessfully for months to get Knox’s medical report from the prosecution or find out if one had been prepared, Clayborne was arrested again after he was found with marijuana. The arrest violated the conditions of his bail for the child abuse charge that was later proven to be false, and Clayborne spent the next seven weeks at the Dane County Jail charged with an additional count, felony bail jumping.

While in custody, Clayborne lost his job, his car and got evicted from his new apartment. And he missed important milestones in his son’s life, like his first Christmas.

"When I went into jail, he wasn’t walking. When I got out of jail, he was speaking and walking," Clayborne said. "I felt like I was kidnapped, basically. I was robbed and kidnapped. My first high-paying job, doing good, getting raises. (Then) this happens."

At Jones' request, pediatric neurologist Dr. Joseph Scheller looked at Clayborne’s son’s case and determined a seizure triggered by an irritation of the baby’s brain tissue caused the baby’s lethargy on the day of the incident.

"Infants who are victims of abusive head trauma are typically found to have external injury, broken bones, neck injury, retinal hemorrhage, and brain injury," Scheller wrote in his report. "(This infant) had none of these."

The new medical reports prompted Dane County Deputy District Attorney Rachel Sattler, in May 2017 — nearly one year after Clayborne’s arrest — to file a motion to dismiss the case. But by then, Clayborne’s stable life had already splintered. He’s still climbing out from under the wreckage.

Clayborne is having trouble getting a new place to live with an eviction on his record. He now spends as much time as he can with his healthy, 5-year-old son, who does well in school and recently won an award for playing football.

Jones said doctors and authorities were quick to make assumptions about his client. He called the episode a "nightmare" for Clayborne.

"The problem is the medical evidence did not back any of that up. They kind of ignored it," Jones said. "They went with 'Angry young parent loses temper and hurts kid.'"

Fall down stairs leads to charges

Clayborne is not the only person whose life was upended after being wrongfully charged with child abuse following assessments by Knox.

In Jefferson County, a judge considered one charge so spurious that she ended the trial before the defense even put on its case.

In 2016, a Lake Mills child care provider fell down the stairs while holding a 4-month-old. The baby sustained a blow to the head, which briefly knocked him unconscious, while the caregiver reportedly suffered minor injuries. After scans showed the child had bleeding on his brain and hemorrhaging in his eyes, Knox declared it abusive head trauma, and the woman was charged with recklessly causing the baby harm.

But the 2018 trial in Jefferson County Circuit Court ended abruptly after the prosecution laid out its arguments, including testimony by Knox that the injuries were intentionally inflicted and not caused by a fall.

The defense moved to dismiss the case, citing lack of evidence, and Judge Jennifer Weston agreed. Weston found the state had failed to show how the caregiver’s conduct caused the injuries — or how it was reckless. 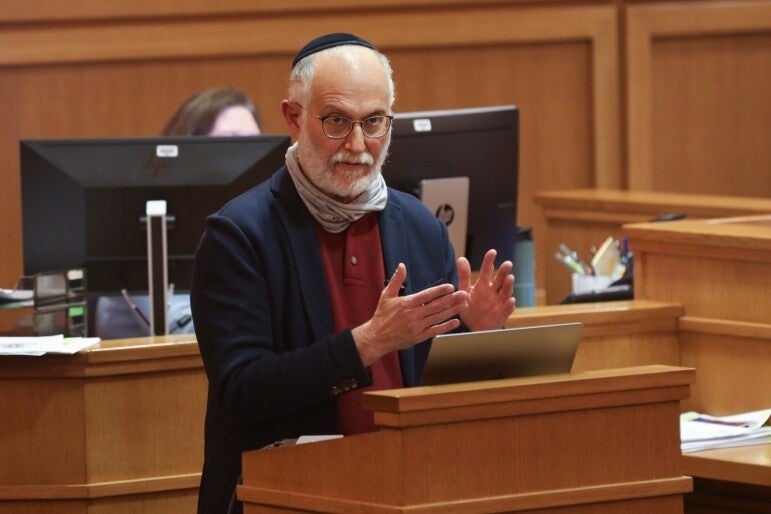 Dr. Joseph Scheller, a Maryland-based pediatric neurologist and epidemiologist, testifies for the defense at the Dane County Courthouse in Madison, Wis., on Nov. 11, 2021 during the trial of Kathryn Campbell of Stoughton after a 4-month-old baby in her care was found to have bleeding around her brain. Following a five-day trial, a jury acquitted Campbell of felony child abuse after two hours of deliberation. Coburn Dukehart/Wisconsin Watch

Scheller was sitting in the courthouse waiting room ready to testify for the defense when the trial was halted. He recalled the group of motorcycle riders dedicated to fighting child abuse who attended to support the prosecution. The bikers let out an "uproar" of protest after the judge tossed the case, he said.

"Anything could happen from rolling (down the stairs)," Scheller said of the prosecution. "It was so ridiculous."

The caregiver declined to speak with Wisconsin Watch, citing the stigma, intimidation and public scrutiny she continues to face after being falsely branded as a child abuser. She asked not to be named.

Scheller, testifying for the defense, said the child, who is now a healthy 4-year-old, had a medical condition that predisposed her to bleeding around the brain.

Knox had been scheduled to be a "key witness" in the Campbell trial, but the prosecution removed her name from the witness list, and Judge Susan Crawford ordered both parties to refrain from mentioning her findings. 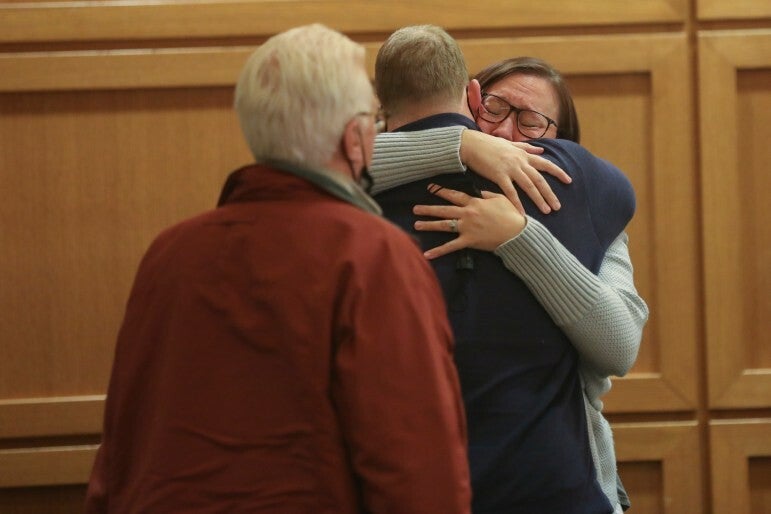 Kathryn Campbell hugs her husband Steven Campbell after hearing the not guilty verdict in her criminal trial at the Dane County Courthouse in Madison, Wis., on Nov. 12, 2021. Campbell was found not guilty of the charge of abusing a 4-month-old in her care. Former University of Wisconsin Dr. Barbara Knox had been scheduled as a "key witness" in the trial, but the prosecution removed her name from the witness list. Coburn Dukehart/Wisconsin Watch

Scheller specializes in abusive head trauma cases and has reviewed records in over 500 cases and testified in over 250 of them. He does not take cases he suspects could be child abuse.

Nationwide, at least 25 people convicted of abusive head trauma or its subcategory, shaken baby syndrome, have been exonerated since 1992 — five of them in 2021 alone, according to The National Registry of Exonerations. One of the most high profile cases involved Audrey Edmunds, a Waunakee child care provider and mother of three who served 12 years in prison for a shaken baby conviction that the state Court of Appeals overturned in 2008.

Scheller said in his experience, when child abuse pediatricians get it wrong, there is no accountability.

"You have the power to inflict so much damage on an innocent person," he said. "You just have to be so careful with that power."

The Fund for Investigative Journalism provided financial support for this story. Wisconsin Watch Managing Editor Dee J. Hall contributed to this story. The nonprofit Wisconsin Watch (www.WisconsinWatch.org) collaborates with WPR, PBS Wisconsin, other news media and the University of Wisconsin-Madison School of Journalism and Mass Communication. All works created, published, posted or disseminated by Wisconsin Watch do not necessarily reflect the views or opinions of UW-Madison or any of its affiliates.