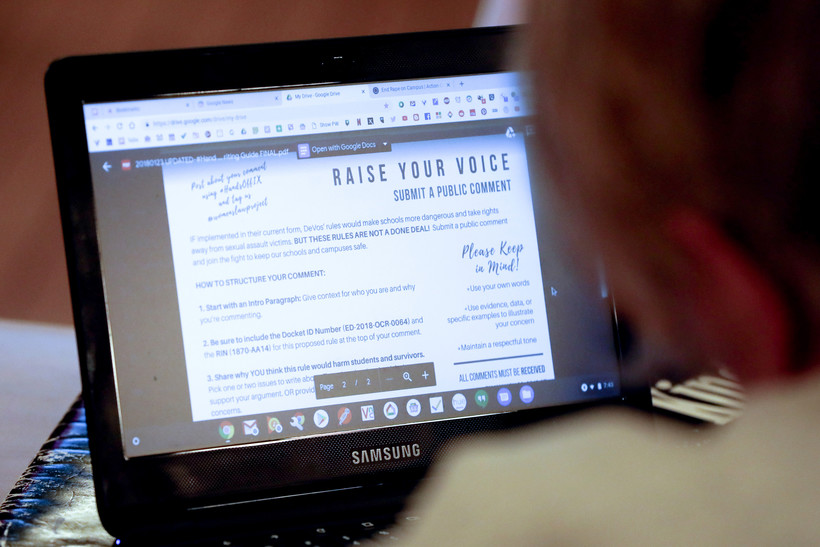 A woman attending the monthly meeting of the southwest Pennsylvania chapter of the National Organization for Women, looks over information as to how people can register their thoughts on the proposed changes to the implementation of Title IX as it pertains to the sexual abuse regulations in education in Monaca, Pa. on Wednesday, Jan. 23, 2019. Keith Srakocic/AP Photo

Wisconsin has joined 17 other states in filing a legal challenge against new federal rules regulating sexual assault and sexual harassment investigations in colleges and public schools. The complaint alleges the new rules will mean less protection for victims.

The challenge asks a federal judge to declare new rules on sexual harassment and assault, known as Title IX, unlawful and to postpone the Aug. 15 deadline set by U.S. Department of Education Secretary Betsy DeVos.

In early May, the U.S. Department of Education announced that DeVos "took historic action" to strengthen Title IX protections for survivors of sexual assault and "restore due process in campus proceedings."

"Too many students have lost access to their education because their school inadequately responded when a student filed a complaint of sexual harassment or sexual assault," said DeVos. "This new regulation requires schools to act in meaningful ways to support survivors of sexual misconduct, without sacrificing important safeguards to ensure a fair and transparent process."

The new Title IX final rule made notable changes that include letting colleges raise the bar for what is considered a violation of campus policy meriting punishment — effectively narrowing the definition of what constitutes sexual harassment to "unwelcome conduct" that is "so severe, pervasive and objectively offensive that it effectively denies a person equal access to education."

It also bars universities from using a "single-investigator model," which is common in higher education and currently used by the University of Wisconsin System. The rule change also requires colleges to hold live hearings and allow cross-examination of accusers and defendants.

On May 8, the Foundation for Individual Rights in Education, which provides legal representation to students in freedom of speech cases, cheered DeVos' Title IX changes. Legislative and policy director Joe Cohn, wrote that "The new regulations, barring congressional or judicial intervention ... will ensure that allegations of sexual misconduct are neither ignored or prejudged."

States challenging DeVos' new sexual misconduct rules argue that if it's allowed to take effect "students across the country will return to school in the fall with less protection from sexual harassment."

"Well, ultimately, we're hoping to have the rule struck down," said Kaul. "Secretary DeVos has been making a significant effort to try to roll back protections for victims of sexual assault and sexual harassment on campus. These are protections under Title IX, which requires schools to take certain actions to ensure that there is equality of opportunity for men and women in schools."

"You know, you can debate what's appropriate in a college disciplinary proceeding, but this applies in the K-12 context as well," said Kaul. "And so you'd potentially be talking about, you know, a middle school student who comes forward having to be subject to cross-examination just to be able to have discipline as a result of a complaint that they've got."

"With the requirement of live hearings and cross examinations, our student judicial system is becoming a courtroom," said Cross.

A UW System spokesperson declined an interview with Cross about Wisconsin joining the legal challenge against the Title IX changes.

But in comments submitted to the U.S. Department of Education on Jan. 28, 2019 — when the federal Title IX rulemaking process was underway — Cross said UW System institutions rely on impartial investigators to gather evidence following sexual assault or harassment complaints and hearing panels used to evaluate credibility.

He said "sometimes complainants and witnesses agree to testify at the hearing," but if they don't the investigative report and any testimony is used to make decisions.

"More importantly, requiring complainants and witnesses to testify at a live hearing will likely reduce the number of individuals who submit formal reports of sexual harassment and sexual assault, as complainants may be reluctant to subject themselves or their friends to cross-examination at a hearing," Cross said.