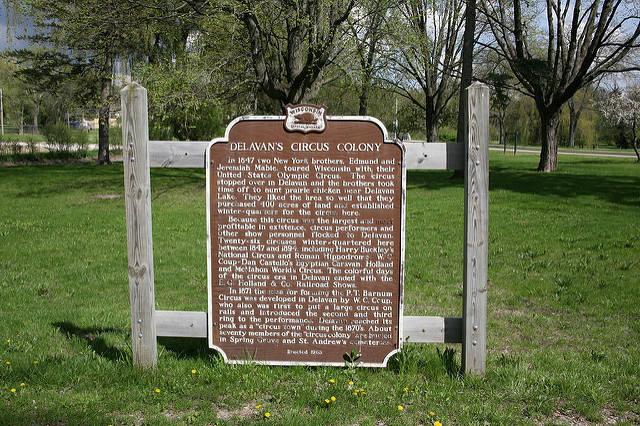 Wisconsin Historian Is On A Mission To See, Photograph State's Historical Markers, Sites

If there’s a historical marker on the side of the road near a Wisconsin community, chances are Melinda Roberts has seen it.

Five years ago, the De Pere resident set out to achieve an ambitious goal: to visit and photograph each and every official state historical marker in Wisconsin.

Roberts moved to Wisconsin in 2011, and around the same time, she was also diagnosed with cancer and given two years to live.

"My doctor suggested I go do something, since we didn’t know how much time I had," she said.

She discovered the state’s historical markers on a trip to Baraboo to see Man Mound.

"I decided I would go visit all of them, you know, to learn the history of my new home and to get a chance to travel around," she said.

She started with a document that lists all of Wisconsin’s official historical markers.  It was a helpful place to begin, but the markers were listed chronologically by date erected, and not exactly ideal for a travel plan.

"I took me about 60 hours to put it into an order by county," she said.  "And then I went to each county and sort of checked off the markers."

There are more than 550 official state historical markers, according to the Wisconsin Historical Society.  But during her travels, Roberts quickly learned that there were plenty more markers out there that aren't affiliated with the state Historical Society.

"Markers can be placed by the state, they can be placed by a county or a historical society, or a group, or even an individual that wants to recognize their own family history at a location in a community," she said.  "I would make a wrong turn and boom! There’s a marker in front of me or a veteran’s memorial.  And I began to stumble upon a lot of things that were not documented online at all."

Roberts compiles all of her information and photographs on her website, Wisconsin Historical Markers.

She estimated that her website now has information about more than 5,300 markers and sites, and about 60,000 photographs of Wisconsin.  In addition to historical markers, she also has information and photos about roadside attractions, lighthouses and national natural landmarks.

Roberts has been cancer-free since February 2015, something she attributes to the project and the work she put into it.

"I was so focused on things other than cancer and I believe that’s what got me through and past my diagnosis," she said.

Despite achieving her goal of seeing all the state’s official historical markers  -- not to mention about a dozen that the state had lost track of, as well as thousands of local markers -- she plans to keep going.  She’s also working with the state cartographer on an app that will help people find historical markers near their location.

Her summer plans include checking out local markers around Middleton and Madison, but also photographing all of the Belgian chapels in Door County.

"I probably know of about a thousand markers right now I haven’t visited," she said.