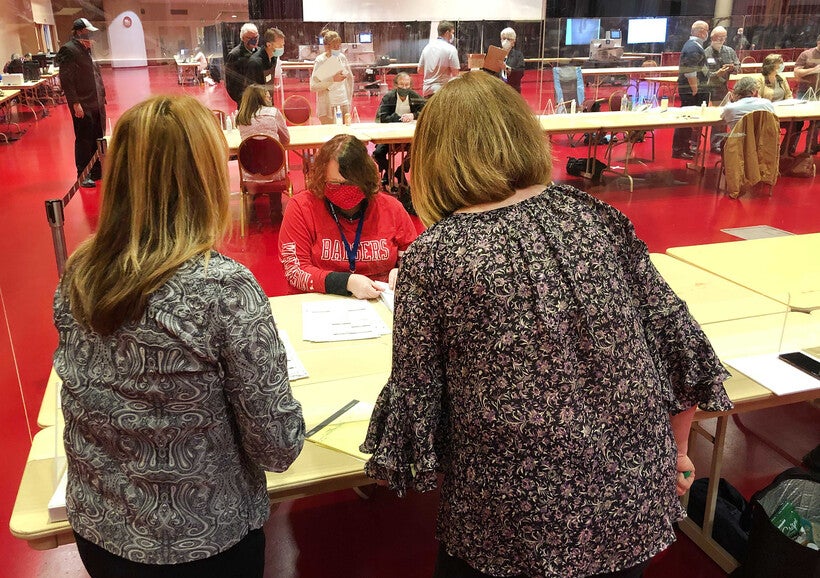 The head of a conservative-backed election investigation in Wisconsin is asking county clerks to retain records and information related to the 2020 election, but at least one local official says the wording of the request raises concerns about the direction of the investigation and potential security breaches.

Former conservative state Supreme Court justice Michael Gableman, who was officially tapped to lead the GOP-backed election investigation last month, sent a letter Monday to an unknown number of county clerks across Wisconsin. In the letter, Gableman requested the clerks "preserve any and all records and evidence relating to the November 3, 2020 election in Wisconsin, including but not limited to information retained on any and all voting machines." The letter says that includes computer router information, metadata and access logs.

The letter also asked clerks to forward information about "any and all intentional or unintentional destruction of records between the November 3, 2020 election and the date of this notice."

Gableman had previously asked state officials to ensure the records were preserved, but was referred to the county officials who oversee and maintain the information.

Dane County Clerk Scott McDonell said Monday he has several concerns with Gableman’s letter, including that the information outlined in the letter is either "useless" or "information that should not be shared."

"The question (Gableman) asks is wrong," he said. "The scanner that you put your ballot into is essentially a dumb terminal, there’s nothing on there to find."

McDonell said other information seemingly referenced by Gableman in the letter is stored on servers housed in the county clerk’s office. He said those servers would include information that shouldn’t be made publicly available, like IP addresses used by county and municipal election officials to exchange information.

"Really the only purpose they serve is to provide a roadmap for our enemies to know how to penetrate our system," he said, calling the election servers "critical infrastructure that needs to be protected."

McDonell said he is concerned about the possibility of a future request to turn over the information, citing a recent memo from the U.S. Department of Justice that says local election officials are required under federal law to retain custody of election-related records, even during an investigation, to preserve election security.

"(Gableman) clearly doesn’t understand how elections work," he said. "It’s just concerning how little knowledge about elections seems to be demonstrated in this (letter)."

McDonell said this is the first communication he has received about the investigation, which is backed by Assembly Speaker Robin Vos, R-Rochester, and has been authorized for an initial budget of about $680,000.

Milwaukee County clerk George Christenson said he also received the letter Monday, but had difficulty locating it because it came from a Gmail address and the sender was listed as "john delta," not Gableman.

Christenson said he has all the information outlined in the letter.

"We will of course preserve everything that’s required of us in federal statute," he said.

Christenson said he forwarded the letter to his office's legal counsel and that his office will assess legal concerns about turning over specific election information and data if and when Gableman requests it.

Several other county clerks either declined or did not return WPR's requests for comment.

The investigation led by Gableman is one of several ongoing or pending GOP-backed election investigations in Wisconsin. Others include an inquiry ordered by the Legislature’s GOP majority from the nonpartisan Legislative Audit Bureau, an effort spearheaded by Rep. Janel Brandtjen, R-Menomonee Falls, and an inquiry by a group of private citizens.

In addition to a presidential recount in Dane and Milwaukee counties and mandated state audits, numerous lawsuits failed to uncover any evidence of widespread fraud or wrongdoing in the election. According to the Wisconsin Elections Commission, local clerks in Wisconsin referred just 13 allegations of suspected fraud in the November 2020 election to district attorneys. Nearly 3.3 million votes were cast in the state.