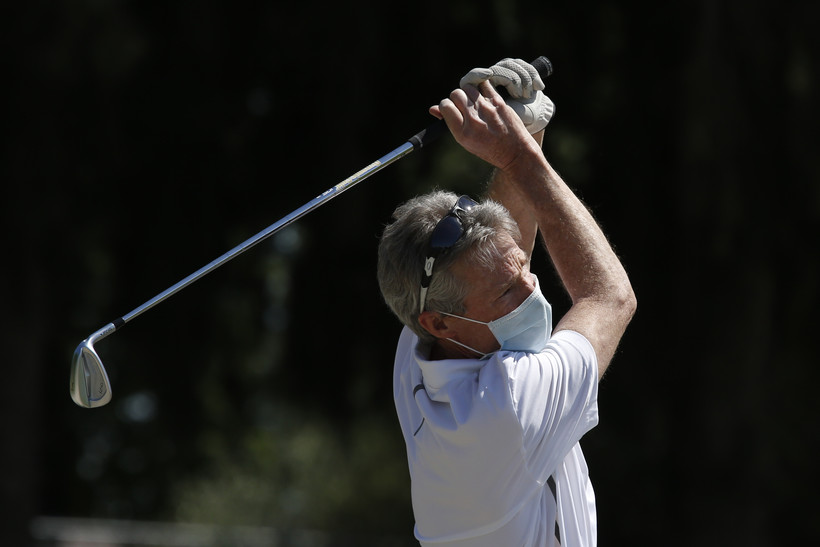 Mike Alberts wears a face mask as he takes a practice swing on the driving range at the Haggin Oaks Golf Complex in Sacramento, Calif., Tuesday, April 21, 2020. The Sacramento County health director has designated golf as an essential service to the community, allowing the course to stay open during the coronavirus caused shelter-in-place orders. Rich Pedroncelli/AP Photo

Courses Are Taking Many Safety Precautions To Prevent The Spread Of COVID-19
By Megan Hart
Share:

The revised "Safer at Home" order from Gov. Tony Evers' administration goes into effect Friday. Under the new order, the state’s golf courses may open.

Courses around Wisconsin said tee times are booking up quickly. In part, that may be because they’re more spread out. At Ledgeview Golf Course in De Pere, they’re usually seven minutes apart. To allow for social distancing, groups will now tee off every 15 minutes, said Ledgeview’s co-owner Steve Payant.

Golfers should expect to see other changes, too.

Clubhouses, pro shops and training facilities are closed. Many courses are requiring golfers to pay for the rounds in advance to limit contact between players and staff. Due to these changes, Ledgeview is working to implement an online reservation and payment system, Payant said.

Players are being asked not to show up early for their tee times, and courses are also taking steps to limit the number of things players touch by removing rakes, ball washers and benches.

At Ledgeview they’ve taken a creative approach to preventing golfers from reaching into the holes. They cut pool noodles in half and placed them around the flag sticks so balls will hit the noodle and bounce back out, Payant said.

It’ll be important for golfers to follow social distancing rules, he added.

"It's a privilege, and we're lucky to be one of the businesses being opened, but they could just as quickly shut you down as quickly as they opened you back up," he said.

Other courses have reported receiving lots of phone calls since Evers’ revised order was announced.

"The response has been great," said Todd Monteba, a pro at Quit Qui Oc Golf Club in Elkhart Lake. "People are looking forward to getting outside and getting some exercise and enjoying the fresh air."

The reservation line at Destination Kohler has also seen an uptick, said Mike O'Reilly, director of golf operations for the resort.

It’s mostly local golfers who play at Kohler’s courses this early in the season, he said.

While Kohler may not see as many travelers flying in over the coming weeks, some regional golfers will be driving to the area, O'Reilly said.

One of the resort’s hotels, the Inn on Woodlake, is reopening to accommodate them. Both the hotel and the golf courses have strict cleanliness guidelines in place, O'Reilly noted.

Whistling Straits, Kohler’s most famous course, is scheduled to host the Ryder Cup later this year. Like many courses across the state, it'll reopen to golfers Friday with a few changes in place. Bag-carrying caddies, usually required, won’t be available.

Kohler will also have a limited number of pull-carts available to rent, but players should bring their own if possible, O'Reilly said.

Aside from golf courses, the revised order brings several additional changes. Non-essential businesses are allowed to do more "minimum basic operations." They can bring in workers to maintain their inventory and infrastructure. Curbside pickup is also encouraged in the updated order.

The order is in effect until Tuesday, May 26, although Evers said Wisconsin will need to ramp up its testing for COVID-19 before the state can reopen. Republican lawmakers have asked the state’s Supreme Court to block the order.