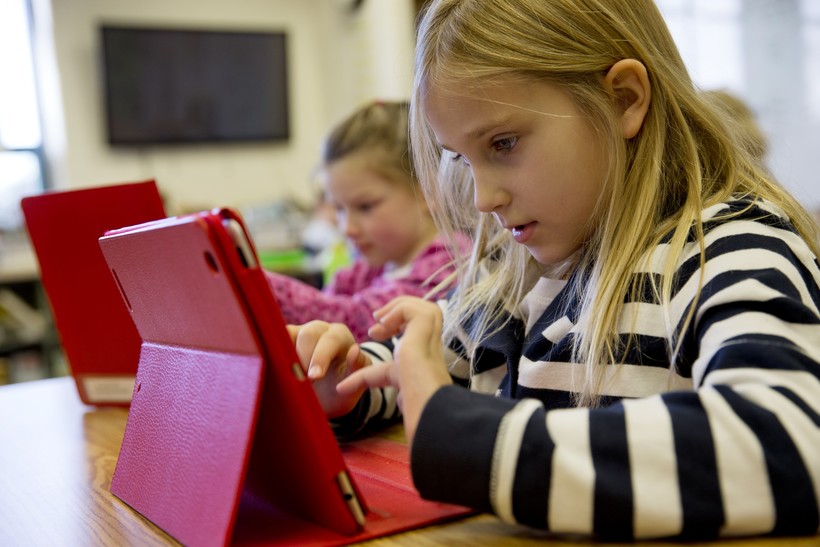 This photo taken Nov. 25, 2013 shows Ella Russell, working on an e-book on an iPad during her second grade class at Jamestown Elementary School in Arlington, Va. Jacquelyn Martin/AP Photo

State Continues To Have Some Of The Largest Gaps In Test Scores For White And Black Students
By Kyla Calvert Mason
Share:

Wisconsin was among nine states to see reading scores on national standardized tests fall for fourth-graders in 2017.

The National Assessment of Educational Progress tests the reading and math skills of fourth- and eighth-graders across the country every other year. State test results released Tuesday remained flat on the other three tests, despite small score changes for Wisconsin’s fourth-graders in math, and eighth-graders in both math and reading.

"What it tells me is that the performance of our students has not changed and the rest of the nation has improved, when you’re using (this test) as a measuring stick," said Tom McCarthy, spokesman for the state Department of Public Instruction.

He added that reading programs put in place in the past six to eight years haven’t yielded hoped-for results, and are now seeing their funding peter out.

"We’re in the top grouping of states for performance in both eighth-grade reading and math and that shows that our overall system is still doing a good job of educating kids and preparing kids in a well-rounded way," McCarthy said. "But when you look at the early grade stuff, it’s sending a warning signal of how long can our system hold at this pace?"

The average fourth-grade reading scores dropped three points and the percentage of students testing at or above proficient dropped to 35 percent from 37 in 2015. While the gap in average scores for white and black students shrank in Wisconsin, it was the fifth largest such gap in fourth-grade reading scores in the country. In 2015, the state had the second largest gap between white and black students on the exam.

The average fourth-grade math score was down slightly, but the change was not considered statistically significant. Forty-two percent of state fourth-graders tested at or above proficient, down from 45 percent in 2015. The gap between black and white students also shrank on this exam, but was the second largest in the country.

In eighth-grade reading, the state’s average score was virtually unchanged and the portion of students testing at or above proficient held steady at 39 percent. The gap between white and black students narrowed, but remained the second largest in the country.

Average eighth-grade math scores were also flat, but 39 percent of students tested at or above proficient compared to 41 percent in 2015. The gap in scores for white and black students narrowed, going from the second largest nationally in 2015 to the third largest in 2017.

"Wisconsin’s NAEP results, and those of the past decade-plus, show how desperate the need is for us to work together to close opportunity gaps for our kids," state Superintendent of Public Instruction Tony Evers said in a press release. "As our population continues to diversify, we cannot afford to leave large numbers of our students behind their peers and expect the Wisconsin economy to continue without disruption."

McCarthy said he believes the willingness to acknowledge and discuss achievement gaps in the state is growing, which is one key component to effectively addressing them.