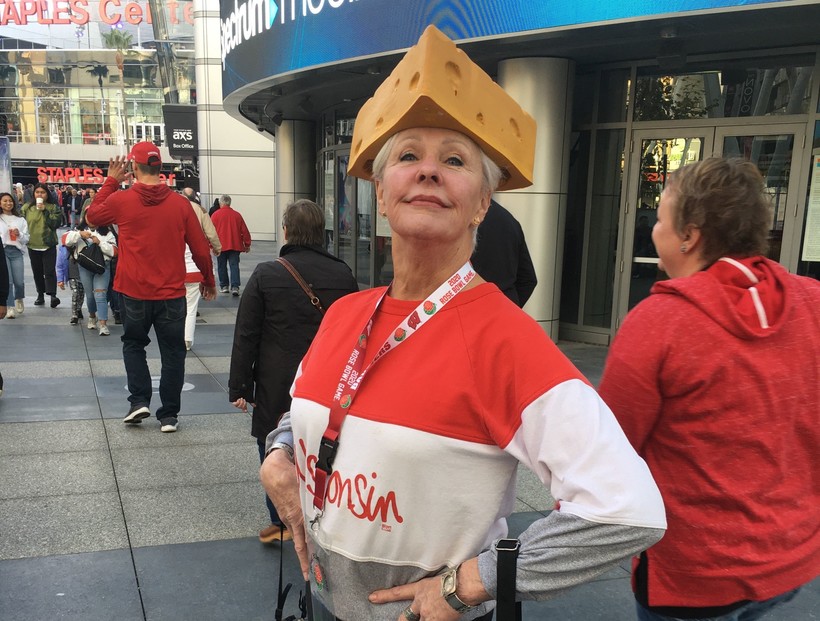 A Wisconsin fan poses before entering a Rose Bowl pep rally at L.A. Live. The Badgers will face the Oregon Ducks in the Granddaddy of Them All on Jan. 1, 2020. Megan Hart/WPR

Downtown Los Angeles was seeing red Monday, when hundreds of Badgers fans turned out for a Rose Bowl pep rally outside the Staples Center.

The "Granddaddy of Them All" will feature the No. 8 Wisconsin Badgers against the No. 7 Oregon Ducks. It kicks off at 4 p.m. Wednesday. The Rose Bowl can accommodate 92,000 fans. Many of them will be wearing red. Badger fans who traveled to Southern California for the game say they’ve enjoyed the weather and the Wisconsin spirit that’s taken over downtown LA.

Tom King traveled from Oshkosh. He said being able to experience the Rose Bowl with his two sons is special.

"It’s nice to see everybody get together and get excited about the game," he said.

King also attended the 2011 Rose Bowl. He admitted it seemed like more Badgers fans turned out for the pep rally that year. It may be because Wisconsin fans are tired of traveling. This is the Badgers’ sixth appearance in a New Year’s Six bowl in the last 10 years. Only Alabama, Clemson, Ohio State and Oklahoma have played in more. 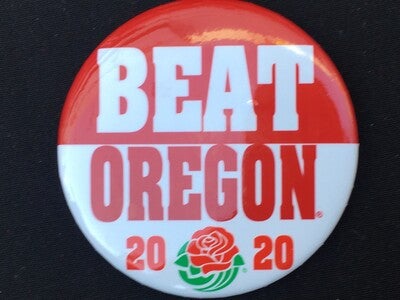 "Beat Oregon" buttons are a hot item in Los Angeles in advance of the Rose Bowl. Wisconsin will play Oregon on Jan. 1, 2020. Megan Hart/WPR

Former Badgers running back and current Los Angeles Ram Melvin Gordon welcomed fans to his new hometown. He encouraged them to get out to the beach and enjoy the sunshine.

This will be the first Rose Bowl for Diane and Steve Streck from Fitchburg. They arrived Sunday morning, checked out a couple restaurants and attended a Rose Parade float viewing before Monday’s pep rally. Other Wisconsin fans didn’t have to travel so far.

Marilyn Wittenwyler is originally from Wisconsin, but she’s lived in Southern California for almost 20 years. She’s attended the Rose Bowl twice before, and she said Badgers fans travel well to Pasadena.

"It's just like coach Alvarez says, it's Camp Randall west," she said. "I mean, last time it was 80 percent [Wisconsin fans.] Every time we've gone, it seems like Wisconsin overtakes it."

Like the fans, Wisconsin’s players have also gotten to enjoy all the Los Angeles area has to offer. They’ve eaten In-N-Out Burger, visited Disneyland and attended a movie premier. Running back Jonathan Taylor said he especially enjoyed Disney’s "Star Wars" ride, but his focus is Wednesday’s game.

"You have a lot of great experiences throughout the week, but it's the game that's most memorable," he said.