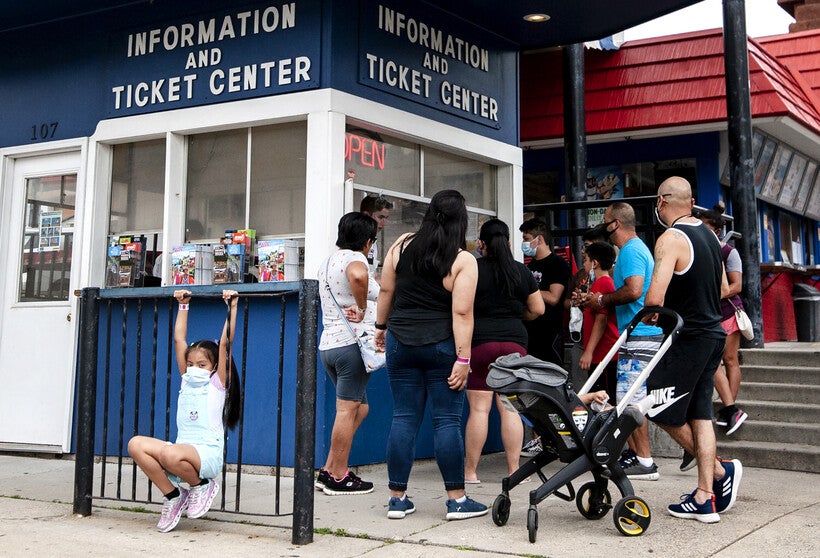 7-year-old Hayley Contreras, left, wears a mask as she hangs on a rail as her family gets tickets for a boat tour Monday, Aug. 10, 2020, in the Wisconsin Dells. Angela Major/WPR

One of the oldest and most well-known tourist attractions in Wisconsin Dells announced it won't reopen again after the pandemic forced it to close for the 2020 season.

The Tommy Bartlett Show was a water-skiing exhibition and stage show held in a massive outdoor auditorium on Lake Delton. Owners announced in May the show would not be open for the season, a move that meant layoffs for 115 seasonal employees, including performers.

It was the highest-profile closure in Wisconsin Dells due to the pandemic. Most businesses, including large resorts and water parks, opened for the season despite a shortage of workers and the potential for large gatherings to spread COVID-19.

The Tommy Bartlett Show has been one of the core businesses of the area's tourism industry through the decades, said Romy Snyder, CEO of the Wisconsin Dells Visitors and Convention Bureau. Snyder has a personal connection to the show as well; her parents owned a small business nearby in the 1960s and they became family friends with president and co-owner Tom Diehl and his family. Like many people locally, Snyder and her brothers worked there during the summers when they were younger.

"I'm not sure that the real gravity of (its closure) has sunk in to me personally," Snyder said. "There's no doubt that it's been such an important part of the Wisconsin Dells entertainment base."

In the May announcement, Tommy Bartlett Show owners said they hoped to return in 2021. On Wednesday morning, Diehl released a statement saying that would not be possible.

"Each fall, we begin to plan for the next season, and with so much uncertainty surrounding the future of the pandemic and travel, we cannot undergo additional financial risk and investment to beginning planning for summer 2021," Diehl said. "While we are grateful that we had almost seven decades of entertaining visitors in Wisconsin Dells, we have no choice but to close the show."

The Tommy Bartlett Show began in 1952 as a traveling show in Chicago, but made Wisconsin Dells its permanent home the next year. Bartlett himself was a radio and television broadcaster in Milwaukee before he started the traveling show. Bartlett died in 1998.

The attraction expanded through the years, and in 1982 the company opened Tommy Bartlett Exploratory, a family-oriented science museum. That attraction remains open.