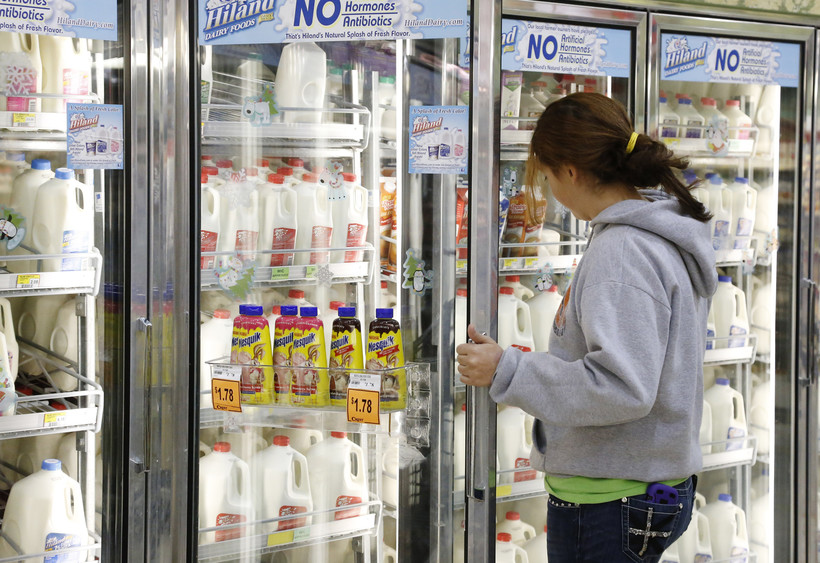 In this Dec. 4, 2013, photo Jessica Walton, of Guthrie, Okla., reaches for a container of milk at a grocery store in Edmond, Okla. On Tuesday, Nov. 12, 2019, Dean Foods, the nation's largest milk processor, filed for Chapter 11 bankruptcy protection and said it may sell the company off to the Dairy Farmers of America. Sue Ogrocki/AP Photo

The company has one plant in Ashwaubenon and produces milk under brands like Dairy Pure and TruMoo. It also processes dairy products for other brands like Land O’Lakes and Organic Valley.

In a press release, Dean Foods said it would be "operating in the ordinary course of business" and the company has secured financing to continue paying employees and milk suppliers.

Dean Foods CEO Eric Beringause said in the statement that continued declines in milk consumption has impacted the business.

Mark Stephenson, director of dairy policy analysis at the University of Wisconsin, said the company has seen declining milk sales for a few years.

"Some of this has come from competition in that beverage space from plant-based milks, but water and other beverages as well. And some of it's just shifting consumer preferences," Stephenson said. "People don't have the bowl of cold cereal with milk on it as often as they did when I was a kid."

"The five-year downward trend in the milk market is taking a toll, not only on our dairy farmers but on processors too," Trotter said in an email. "The need for global market access through the swift action of Congress to pass USMCA (United States-Mexico-Canada Agreement) and remove trade barriers is critical. More innovation in the fluid milk market is also badly needed as we continue to see consumption decline. We need enforcement of dairy labeling rules as well."

Jeff Lyon, general manager of FarmFirst Dairy Cooperative, said Dean is a significant player in the milk marketing business and cooperatives like his will be watching for more details of the company’s sale to understand how it will impact local milk sales.

"What part of the business are they purchasing, what are they going to do, will they be purchasing certain plants, other ones they might not want to have anything to do with, whoever the buyer might be," Lyon said.

But Lyon said dairy farmers have more immediate concerns on their mind as winter weather sets in across the state.

"If you’re an individual dairy farmer, you’re more concerned about, 'Am I going to have enough feed for my animals? And if I don't, am I going to cull my animals or what am I going to have to do with my herd. That's the short term thing that they’re thinking about," Lyon said. "Dean Foods, that’s a much longer term (issue) because it will take quite a while for any kind of acquisition to take place."

Organic Valley said in a statement that the company was "disheartened" by Dean Foods’ announcement, saying the move "represents the many challenges dairy farmers face in getting their products to market." The Wisconsin-based organic cooperative said their joint venture with Dean, Organic Valley Fresh LLC, falls outside of the bankruptcy filing and won’t be impacted by the case.