Carlos Esteban, 31, of Woodbridge, Va., a nursing student and recipient of Deferred Action for Childhood Arrivals, known as DACA, rallies with others in support of DACA outside of the White House, in Washington, Tuesday, Sept. 5, 2017. (AP Photo/Jacquelyn Martin)

For Lupe Salmeron, life in the United States is conditional. Her parents brought her to Madison from Mexico when she was 6. She learned English quickly. She made friends in her neighborhood. Her parents told her they were living in the county without documentation, but she didn’t fully understand what that meant until she was in her teens.

When she was 15, Salmeron became one of hundreds of thousands of young immigrants living in the country illegally to receive the protection of the Deferred Action for Childhood Arrivals program, known as DACA. It meant that she would not be deported, and it meant she could legally get a job and a driver's license. It allowed her to go to college. She’s now 22, with a degree in political science.

In the wake of a U.S. Supreme Court decision last week overturning the Trump administration’s attempt to rescind the program, Salmeron and other DACA recipients say they will continue to fight for immigration reforms that would make their temporary legal status permanent — and for broader reforms that would affect the millions of other immigrants living in the U.S. without documentation.

In a 5-4 decision, the Supreme Court on Thursday found that the Trump administration broke the law when it ended the program. Salmeron said the decision came as a "huge relief." But the ruling doesn't settle questions about the program, and it doesn't ensure that she or her family will be safe in the U.S.

"It only gives us relief for a brief minute," she said. "Now we're back to square one, essentially."

That's because the Court made no judgment on the policy itself. Rather, it found that the Trump administration had not given a "reasoned explanation for its action" — a procedural requirement.

And that means DACA recipients remain in limbo. On Friday, Trump tweeted that his administration "will be submitting enhanced papers shortly in order to properly fulfil (sic) the Supreme Court's ruling & request of yesterday." 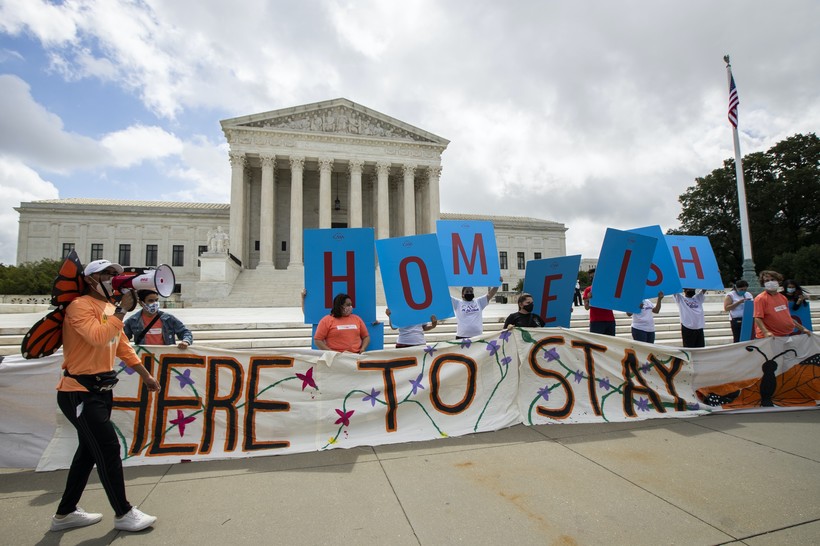 Deferred Action for Childhood Arrivals (DACA) recipient Roberto Martinez, left, celebrates with other DACA recipients in front of the Supreme Court on Thursday, June 18, 2020, in Washington. The Supreme Court on Thursday rejected President Donald Trump's effort to end legal protections for 650,000 young immigrants, a stunning rebuke to the president in the midst of his reelection campaign. Manuel Balce Ceneta/AP Photo

"It's funny because (the Supreme Court ruling) is a huge thing, but yet — it's the same," said Vivi Velasquez, 20, a DACA recipient who is a student at Edgewood College in Madison. "The program is the same as it was yesterday."

Velasquez said she was too nervous to follow the news about the ruling, until her boyfriend's mom sent her word that the court had rejected the Trump administration's effort to end it. Velasquez, who came to the U.S. from Honduras when she was 1 year old, is the first person in her family to graduate from high school, and the first to attend college. She's studying criminal justice with a human services concentration, and wants to be a social worker. She says she'll continue to push elected leaders for immigration reforms.

"The ruling to uphold DACA is a credit to the immigrant rights movement," said Christine Neumann-Ortiz, executive director of the Milwaukee-based organization Voces de la Frontera. "Yet we know that DACA was never a permanent solution. This is a strong reminder of the power we hold when we organize for our rights."

The program was created under an executive order by former President Barack Obama after the failure of a legislative push by congressional Democrats to pass the DREAM Act, which would have given qualifying immigrants who came to the U.S. as children the opportunity to become citizens. Some factors that qualified immigrants to apply include having a high school diploma and a clean criminal record.

But the Trump administration stopped accepting new applications for the program not long after Trump's inauguration in 2017. The program was the subject of negotiations between congressional Democrats and the White House, but negotiations stalled in 2017 after the administration proposed dramatically reducing both legal and illegal immigration in exchange for passing the DREAM Act into law. It was one of the factors that led to the monthlong partial government shutdown in late 2018 and early 2019.

The DREAM Act and DACA were designed to help a group of immigrants most Americans are sympathetic to, and public opinion polling has shown large majorities support the bill. But Salmeron said she sometimes feels guilty about belonging to the group of immigrants without documentation deemed valuable, while others who work at labor-intensive jobs don’t have such protections.

"My degree doesn't make me more valuable than anyone else," Salmeron said. "There's a lot of guilt. I'm grateful for this, but: Why just me? Why just us? Why not our parents? It's hard to wrap your head around."

Both Salmeron and Velasquez said they feel a responsibility to speak out for reform.