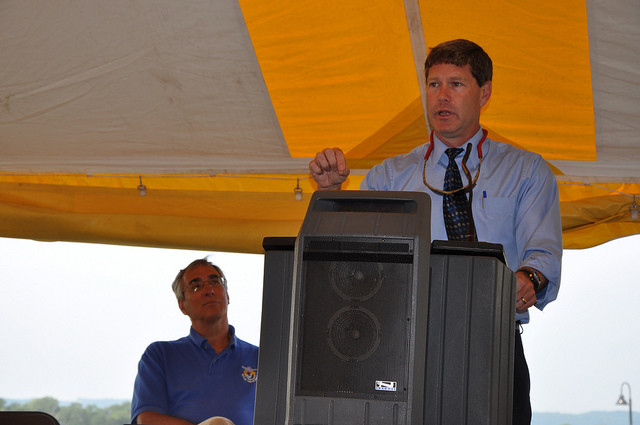 Leadership and elections are on the mind of U.S. Rep. Ron Kind these days. The Democrat, who represents Wisconsin's 3rd Congressional District, said he is pleased to see the Badger State playing a major role for both parties as they strive to narrow their field to choose a presidential nominee.

"It’s kind of nice to have the eyes of the nation on us," Kind said.

But Kind said he's disheartened by the tone and lack of substance that he sees this election season.

"Obviously, this hasn’t been democracy’s finest hour, this presidential campaign, with the rhetoric that we're hearing out there. I always thought presidential campaigns should be more aspirational, more of what we can do together, what will it take to start uniting the state and the country again. We’re not getting a whole lot of that, especially on the Republican side. And I think the people are wrestling with issues that they want to hear some answers to," Kind said.

As far as issues of concern to his constituents, Kind pointed to concern about growing the economy to ensure good paying jobs in Wisconsin, the affordability of higher education and the impact of student debt.

Kind said he hopes that with the party nominations still up for grabs, candidates will use the Wisconsin primary to address those issues and more.

"Hopefully, this is an opportunity for some of those candidates to hit the reset button and start talking about serious issues and that challenges we share as Americans, rather than a discussion about wives, and hands, and every other nonsense thing we’ve been hearing out there," Kind said.

The congressman said that Wisconsin has traditionally been a swing state, and that chances are that going into November, that reputation will hold true.

Looking past the presidential election in November to the next race for Wisconsin governor in 2018, Kind didn't rule out running for the state's highest office.

"You never say never to something like that, and it is a little bit early and premature. But I am disturbed, as a lot of people are, about the direction we’re going as a state. These whole voter suppression issues, the dismantling of the government watchdog entities that are supposed to be non-partisan referees, keeping an eye on our public officials, that has been eliminated now. The lack of support for higher education and the reputation we’re developing as a state right now. But right now, what’s pending is this presidential primary season," Kind said.