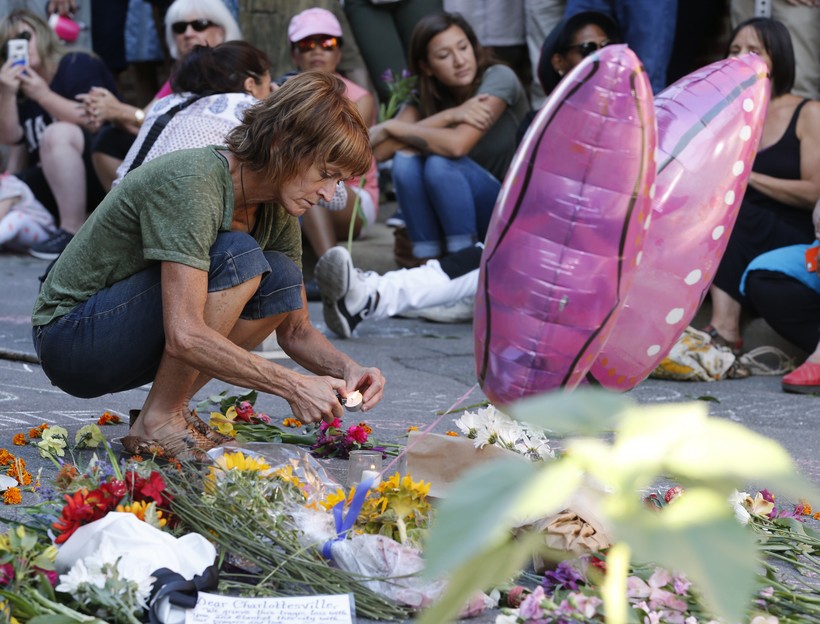 A mourner lights a candle in front of a makeshift memorial during a vigil on Sunday, Aug. 13, 2017, held at the site where a car plowed into a crowd of people protesting a white nationalist rally on Saturday in Charlottesville, Virginia.

Members of Wisconsin's congressional delegation have all denounced the violent clash in Charlottesville, Virginia where a vehicle drove into a crowd protesting white nationalists, killing one woman and injuring others.

But while both of Wisconsin's U.S. Senators and all eight of the state's U.S. Representatives spoke out against the violence, some were more pointed than others, and some were more critical of President Donald Trump's response.

"It’s horrific, it’s a tragedy," said Republican U.S. Sen. Ron Johnson during an interview with WISN-AM Radio in Milwaukee. "This is evil, and I think everybody should renounce and denounce neo-Nazi groups, the white supremacists. There is no room of this kind of hate and violence in this country."

"Racism, hatred, and violence have no place in America. Concerned and disgusted by the events in #Charlottesville," she wrote.

For two days after the attack, both Republicans and Democrats urged President Trump to more forcefully denounce the white supremacists who were demonstrating in Charlottesville.

"The president's comments and actions so far have allowed people who used to wear sheets over their heads to take them off and now go into the streets and start riots and problems," said Democratic U.S. Rep. Mark Pocan, of Madison.

"President Trump said what he needed to say in denouncing these groups, but unfortunately it came 48 hours late," Pocan said. "Now that he's called these groups out as 'criminals and thugs,' he needs to take the next step and remove (White House advisors) Seb Gorka and Steve Bannon."

Here's a roundup of the rest of the Wisconsin delegation's response to the Charlottesville violence.