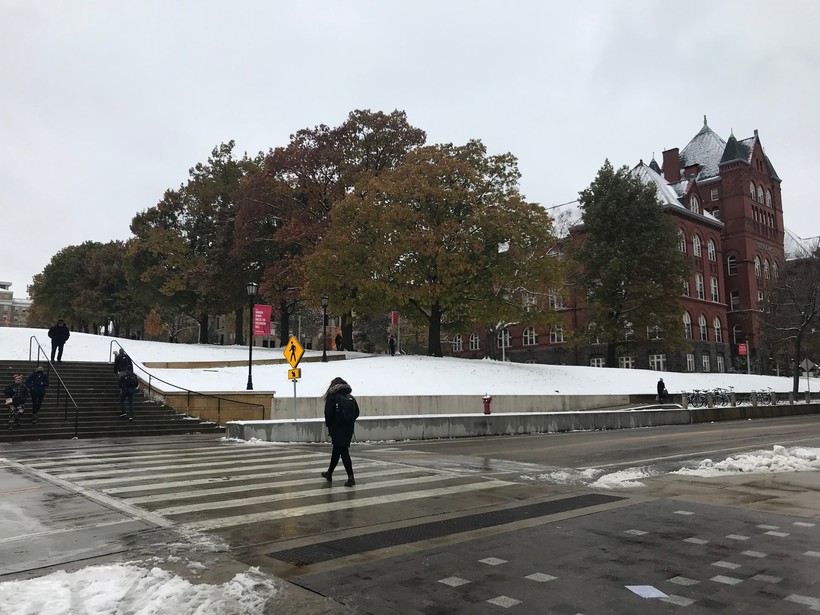 Autumn leaves are on the trees and snow is on the ground outside the University of Wisconsin-Madison's Science Hall on Wednesday, Nov. 6, 2019. Miranda Suarez/WPR

Wisconsin Colleges, Universities Expected To Get $565M From Latest Stimulus

Wisconsin colleges and universities are expected to receive more than $565 million in federal aid via the American Rescue Plan Act passed by Congress this month to help offset financial losses caused by the COVID-19 pandemic.

At least half of the latest aid package must go toward emergency student grants.

The American Council on Education (ACE) estimates that University of Wisconsin System campuses will get nearly $276 million in stimulus funds from the legislation. Private colleges in Wisconsin are expected to get around $117 million. It's estimated the state's technical colleges will get nearly $173 million.

Dan Madzelan, ACE senior fellow, said colleges and universities across the nation are anticipating around $36 billion in federal aid from the latest stimulus. He said that means higher education has received around $70 billion in federal COVID-19 assistance since March of last year.

In July 2020, ACE released a statement indicating colleges and universities across the nation had identified $120 billion in losses and unexpected costs as a result of the pandemic.

Madzelan said ACE has been advocating for increased federal aid to students in the form of an expansion of the Pell Grant program, which provides assistance to those from low-income households.

"The shorthand for that is double Pell," said Madzelan.

He said the current maximum Pell Grant award to qualifying students is around $6,500 for the 2021-2022 school year. ACE and its members would like to see that increased to $13,000.

"So, again, that notion of directing the resources to those students and families that most need it. And, the Pell Grant program is a real good proxy for that."