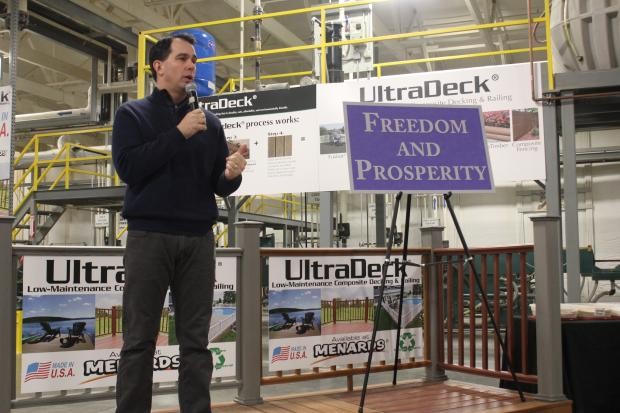 Walker signed the bill at an invitation-only ceremony Monday morning at Badger Meter, north of Milwaukee. He was surrounded by company officials and others who supported the divisive proposal, including Lt. Gov. Rebecca Kleefisch, Assembly Speaker Robin Vos and Senate Majority Leader Scott Fitzgerald.

Walker said that thanks to right to work, more employers will consider operating in Wisconsin.

"As we add tool after tool after tool for our job creators, this is one more big tool to help places like Badger Meter make the case that when they can put jobs anywhere around the world, that Wisconsin is the right place," said Walker.

Walker was asked repeatedly during his recall campaign and his reelection bid whether he would sign right-to-work. In interviews, Walker said it would never happen.

But the governor never promised a veto, and in a speech last week to Wisconsin Manufacturers and Commerce, he touted the bill as if it were his own.

"We now have given one more big thing in that checklist to say that Wisconsin is open for business," Walker said.

About a half-dozen union members protested outside Badger Meter during the bill signing. One called it a dark day in Wisconsin labor history. Union member Jerry Papa said there's no freedom in the new law.

"That's just a right-wing shibboleth. And what this is is a race to the bottom to become like Mississippi, Alabama, Louisiana and Texas. And if you want to become like that, then Scott Walker's your man," said Papa.

The Wisconsin AFL-CIO says Walker continues to favor the millionaires who fund his possible presidential campaign over the needs of middle-class working families.

Wisconsin follows Michigan and Indiana as the latest states to enact a right to work law under Republican control.