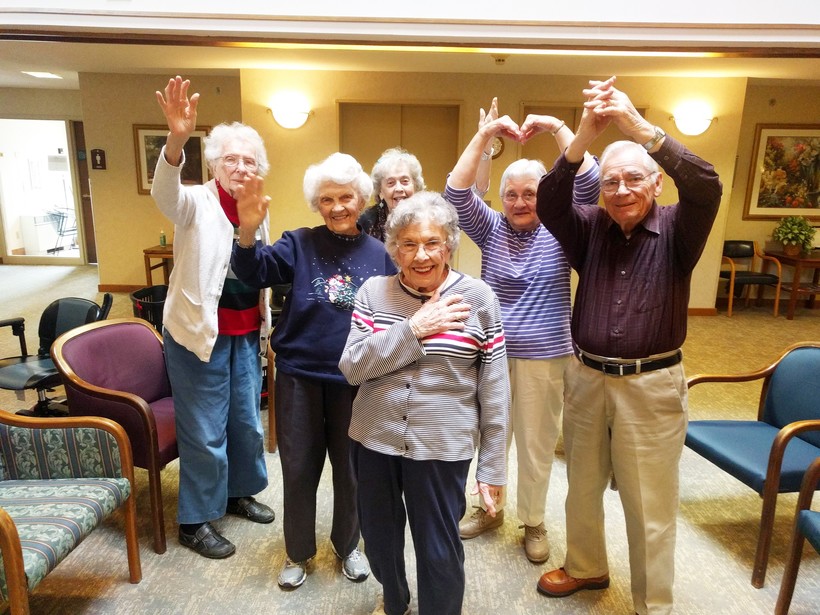 Residents at Luther Manor in Milwaukee come up with ideas for a Thanksgiving Day float based on what they're thankful for. Photo courtesy of Andrew Gray

Andrew Gray jests that he shares more than a few stereotypical traits of those from older generations.

He watches TV with captions, he can’t hear well and he's easily annoyed if people nearby are talking too loud.

Stepping directly into those generalizations, the 20-year-old moved into a one-bedroom apartment — with a small kitchenette and larger living area — in an independent living community at Luther Manor, a facility in Milwaukee that helps residents with different needs from hospice care to assisted living.

The facility offers him room and board in exchange for time spent teaching residents about art and getting them involved in activities.

This exchange is the crux of the Student Artists in Residence, or SAIR, program run through the University of Wisconsin-Milwaukee. Students studying in one of the five areas of art — art and design, theater, dance, music or film — can apply and interview to be placed at one of four sites for a full school year.

"It's more of a fully immersive and multigenerational, cross-cultural learning experience for the students and it's just more so to bring the artistry out in the residents," said Molly Hassler, coordinator of the SAIR program and former participant who graduated from UW-Milwaukee in 2018.

SAIR's other sites include the Village at Manor Park, EastCastle Place and Ovation Jewish Home/Chai Point, all in Milwaukee. Three of the sites offer the live-in experience.

Laura Wengler, EastCastle Place director of community life, said students are truly embedded in the framework — they’re seen at the bistros on campus or picking up their mail.

"It’s a little bit more energy," Wengler said of having a student resident in house.

That kind of energy is generated from trips to coffeehouses and galleries, conversations about artwork, silk scarf dying, screen printing and jewelry workshops, among numerous other events and activities that expose seniors to experiences they may never have delved into before.

"It’s a great connection between generations," Wengler said. "There’s a lot of humor. It kind of lightens the aspect of being old."

Whether giving the students stipends or paying for their room and board, as Luther Manor and EastCastle do, the costs are absorbed by the facility partners.

That’s a welcome benefit for Gray, who estimated he has saved about $20,000 by participating in the program. The base rate of the room he occupies is $2,081 per month.

As a theater major, Gray bonded quickly with resident Rusty Tym — who for the past seven years has been organizing plays at Luther Manor. Now, the two are working on writing a play together that will debut in May.

But Gray’s workshops go beyond drama and incorporate a variety of art, all of which can be enjoyed with limited mobility, an important barrier to keep in mind, Gray said.

All artists come into the facility with an overall goal to work toward, Hassler said.

Her goal was to get independent and memory care residents more connected, which she did through a weekly poetry group.

Gray has structured his stay with a monthly series that celebrate his favorite artists. One of his most attended workshops celebrated works by Frank Sinatra.

"To them, sometimes it's difficult to find this music," Gray said. "I really enjoy sharing music with my residents and being able to talk about them and tell stories through music." He also plays drama games with the residents such as "Mirror Mirror," which has them partner up and mimic each other’s emotions and body movements.

Similar to what residents have done at EastCastle, Gray is planning to take a busload of residents to see the performance of an Arthur Miller play, "All My Sons" Gray is working on at UW-Milwaukee.

He said the performance may especially be impactful for World War II servicemen and women, some of whom he's talked with over dinner.

He hosts about six workshops a month, which includes one each week for independent living residents in addition to workshops in the adult day care center that’s part of the campus.

The residents respond to the program with joy and positive feedback, Gray said.

"They’re so happy just to have things happen," he said. "I think it's so easy to be negative and to be nitpicky about things, but there are so many residents who are happy and open to these experiences."

Gray, who said he likes to keep himself busy, wishes he could devote more time to his SAIR work.

"It really is fulfilling and there really is something beautiful happening in this program," he said.

Gray said he finds the residents dedicated, not just to producing noteworthy pieces of art, but to getting the most out of their experiences.

"There's a dedication to enjoying life," he said. "I think the residents have more of an enjoyment for life than anyone I’ve ever met before."

UW-Milwaukee Students Share Knowledge And A Home With Seniors 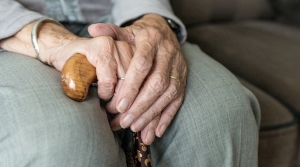 A program at UW-Milwaukee places students in senior living communities where the student will then live and conduct programming with the residents. We hear from a past participant and current coordinator of the program about what this experience offers both parties.