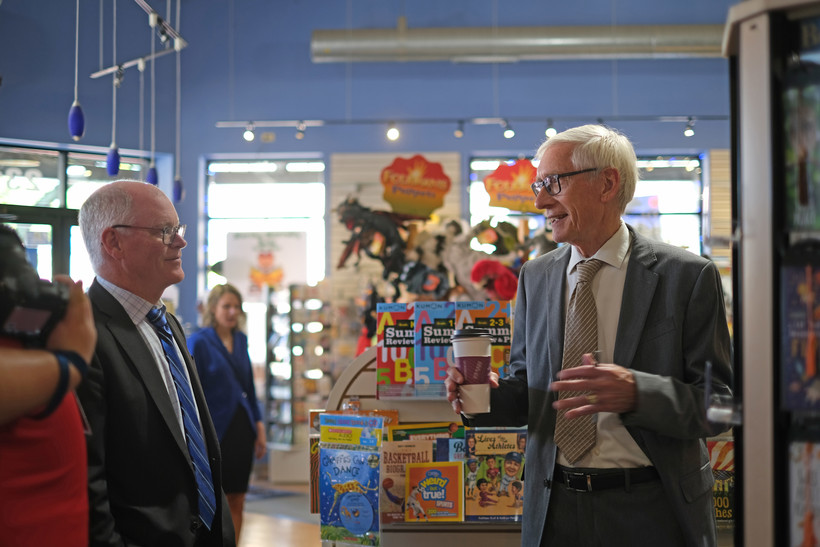 Gov. Tony Evers, right, visits Martha Merrell’s Books and Toys in Waukesha back in September. Courtesy of the governor's office

Wisconsin allocated a bigger chunk of federal money from the American Rescue Plan Act to economic development than any other state, according to a study by the Center on Budget and Policy.

The study found that nearly 56 percent of Wisconsin's ARPA funds were spent to promote the economy, which equates to about $1.1 billion. The next closest state allocated 38 percent for economic development.

The Center on Budget and Policy examined how states spent ARPA dollars through Aug. 31, 2022. According to the report, common uses for ARPA dollars by states nationally included replacing lost revenue, and spending on human services and unemployment insurance.

Of the $1.1 billion Wisconsin allocated toward the economy, $363.3 million was spent on general economic development, $130 million for workforce development and $641.7 million for assistance to businesses, the study said.

Wisconsin also spent $100 million on broadband expansion, $112.9 million on health, $56 million on human services, $45 million on public safety and $550 million on state operations, according to the study.

In the early days of the COVID-19 emergency, Hughes said Evers focused on using federal funds for helping small businesses survive. But as the pandemic continued, she said the governor began thinking about the long-term economic vitality of the state.

"As the governor deployed the federal dollars," Hughes said, "he recognized that there was immediate need, and then there was, 'What can we do to lay the groundwork for the future?'"

Two of the main programs the administration invested in were the Main Street Bounceback and Workforce Innovation grants.

The Main Street program focuses on revitalizing downtowns, while Workforce Innovation grants look for local solutions to the labor shortage.

Both programs were aimed at helping local leaders to find solutions to the problems facing their communities, Hughes said.

"It's our job at the state-level to empower these local organizations," she said. "The empowerment comes by trusting them, by having them demonstrate that they're collaborating among themselves and then giving them resources and letting them run with it."

According to Hughes, every county in Wisconsin received grants from the state that went toward economic development.

In a statement last month, Evers said the investments made have helped the state recover from the pandemic by transforming communities "in every corner" of Wisconsin.

"I’ve been especially grateful to each of the small business owners who've welcomed me to their businesses to see firsthand the positive impact these investments are having on them and the greater community," the governor said, "and I look forward to continuing our work to support local businesses and Main Streets across our state."

The Main Street Bounceback program gave businesses or nonprofits $10,000 to move into a vacant property in Wisconsin’s downtowns. The funds could be used to pay leases, mortgages, operational expenses and other business-related costs.

So far, Hughes said more than 6,600 businesses have received Main Street Bounceback grants. She added that the program’s goal was twofold.

"One was we wanted to help the businesses that had survived the pandemic by filling those vacant spaces," Hughes said. "And then we wanted to reward people who were courageous enough to start a business in this really unstable and uncertain time."

One community that benefited from the program is Crawford County, which received 51 grants with 27 in the city of Praire du Chien, according to Carol Roth, executive director of Driftless Development, an economic development organization in the county.

"The economic impact of what has been funded is almost $840,000," she said, noting the county's goal is to receive 60 grants by the December deadline. "That is huge for our small rural county."

Now, she says Prairie du Chien’s downtown is thriving. The city hosted downtown trick-or-treating ahead of Halloween, which saw more than 1,000 children participate.

"If not for this program, the downtown would look a lot different," Roth said. "It was the shot in the arm that really gave small businesses the ability to move to the next step, to move into a space to actually establish their business."

The Workforce Innovation Grant Program offers grants up to $10 million to local organizations to design and implement plans aimed at solving the workforce challenges facing their regions.

One of the entities that received funding from the program is the Waupaca County Economic Development Corporation. It received $3.2 million to help eliminate transportation barriers that prevent residents from finding employment, according to WEDC.

Waupaca County Economic Development Corporation Executive Director Jeff Mikorski said between 7 and 13 percent of households in the county have more workers than vehicles in their household.

"It doesn't sound like a lot, but when you look at other counties in the same area, you see numbers as low as 1.3 percent," he said.

Mikorski said his organization is working with a nonprofit to create a service model that connects workers with transportation.

"Without additional assistance, there was no way to create a system for transportation," Mikorski said. "In Waupaca County, there's not a lot of the alternatives that other more urban communities would have. There's practically no Uber or Lyft, and there's no bus transit in the county."

He said Waupaca County hopes to launch its transportation in mid-December "with limited capability" as it works out the kinks in the program.

"By March, we're hoping to be able to start expanding that beyond the trial period, and move forward," Mikorski said.

While many worry of a possible recession in the next year, Hughes said the state’s investment will help make local communities resilient enough to weather the potential storm.

"If we do head into a recession, they'll have a little bit of extra gas in the tank to be able to survive it," she said. "... While there might be a global recession, I think Wisconsin is going to be one of those pockets that you’ll see continue to really outperform and be very strong."

"That's really what I'm hearing from our businesses. They're going like gangbusters, and don't foresee that stopping anytime soon," she continued.

Roth had similar sentiments about the future of Prairie du Chien and Crawford County.