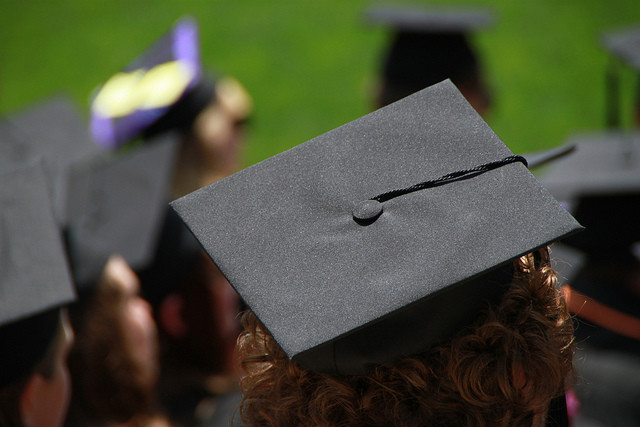 Wisconsin has once again posted the largest gap in the nation between graduation rates for white and black high school students, according to federal data released this month.

White students in Wisconsin had the third highest graduation rate in the nation during the 2015-16 school year, at 92.7 percent. Meanwhile, their black peers graduated from high school at the second lowest rate in the country, 64.2 percent.

About 20 school districts across the state, including Milwaukee, corrected their graduation data after the federal data were collected. But, Tom McCarthy, spokesman for the the state Department of Public Instruction, said the adjustments wouldn’t be significant enough to change how Wisconsin compares to other states.

Since the 2013-14 school year, when Wisconsin’s white-black graduation gap became the largest in the country, the gap has grown by a more than a percentage point from 27 to 28.5. Meanwhile, nationally the gap for white and black students has narrowed from 14 percentage points to 12.

For John Gomperts, president and CEO of America’s Promise Alliance, the thing that stands out about Wisconsin’s graduation rates is that most student groups finish high school near or above national averages. The state’s black students are the only group that significantly trail their peers across the country.

"Something is going on in Wisconsin that needs attention," Gomperts said.

Gomperts’ group is focused on raising the country’s on-time high school graduation rate to 90 percent. He said other states are adopting methods used in Chicago that boosted graduation rates there by more than 16 percentage points between 2011 and 2016. The Chicago school district monitors three early indicators of academic distress.

"Starting even in middle school, and certainly in the ninth grade, looking at: are kids actually coming to school, are kids having disciplinary issues and, third, are kids completing their classes," Gomperts said.

"Collecting best practices from districts and schools that have had success closing gaps whether graduation or opportunity and achievement gaps, and lift those schools and districts up and share their practices with those that are struggling to close theirs," McCarthy said.

He said the state is also looking at data about what happens to students long before they get to graduation to address educational inequities in the state, especially some schools’ social-emotional components.

"Are you suspending larger populations of kids that are of color or have disabilities, because those tend to dribble into the academic indicators quick," McCarthy said.

But Laura Porterfield, an assistant professor of education at the University of Wisconsin-Whitewater who coordinates the school’s urban education program, cautions that schools alone likely can’t solve Wisconsin’s educational gaps.

She said African-Americans moved to Wisconsin from southern states late in the period known as the Great Migration. So families didn’t have time to establish strong safety nets before the manufacturing jobs they moved for began to disappear.

"One of the continuing issues we struggle with in Wisconsin, in particular, is providing the economic and social welfare that we kind of have a moral responsibility to do for black folks in the state," Porterfield said.

Before Wisconsin’s white-black graduation gap became the largest in the country, that distinction belonged to Minnesota. In the 2010-11 school year, Minnesota's black students graduated at a rate 35 percentage points behind their white classmates. In 2015-16, the state’s gap stood at 21.9 percentage points. Minnesota education officials have pointed to statewide efforts to target students in danger of not graduating on time as a factor in narrowing the gap.