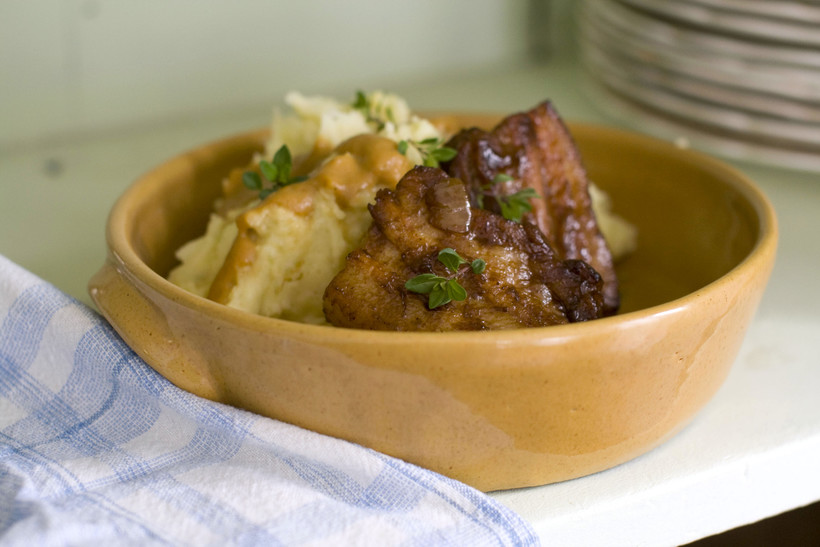 How To Spice Up Your Recipes This Winter
By Colleen Leahy
Share:

Like other things during the winter season, cooking in the cold months can start to become repetitive, drab and tiring. Luckily, Wisconsin chefs are here to help.

Four chefs, all nominated for the 2018 James Beard Award for the Best Chef in the Midwest category, joined WPR’s "The Morning Show" to share their tips for keeping things interesting in the kitchen when you don’t want to go outside.

Take advantage of what’s in season

There’s not as much seasonal local produce during the winter months, but Hunter likes to use what he can find. For him, that means a lot of root vegetables like carrots, celery and parsnips.

But Hunter doesn't just roast them. His trick? He likes to eat them raw. That way he, and his guests, can enjoy a salad in the winter.

"Instead of cooking those into a roasted dish or braising them, my main thing is to shave them," Hunter said.

Hunter uses a y-peeler instead of a traditional peeler to shave his root veggies. Then, he likes to toss his freshly peeled root vegetables with leafy greens and vinaigrette for a simple, bright winter salad.

Like most people, Hunter loves eating soups in the winter, particularly chicken soup. But if you’re a fan of homemade broth, it can be a lot of work to make soup. Hunter’s solution is a pressure cooker.

"You can make a chicken stock in about an hour (in a pressure cooker), which could take six to seven hours on the stove," he said.

With a pressure cooker, Hunter says you can make delicious homemade soups anytime you want without having to plan several days ahead.

Stefano Viglietti, chef and owner of four restaurants, including Trattoria Stefano in Sheboygan If there’s one word that describes winter cooking for Viglietti, it’s braising.

"You wouldn’t want to eat a four-hour braised venison shank with a six-herb risotto in the middle of summer," Viglietti said. "You know that it’s wintertime when you’re eating something like that."

Viglietti thinks of braising as the ideal winter activity: it takes patience and creativity, and it gives you something to do when you don’t want to face the bad weather.

One of his go-to braising recipes involves a venison shank. He marinates them overnight with juniper berries, red wine, garlic and rosemary and drains them the next day, being sure to save the marinade. He then sears the meat, browns some vegetables, adds some tomato paste and tomatoes, tops it all with the red wine marinade and some additional spices and herbs, and puts it all in the oven for three to four hours.

Dan Jacobs and Dan Van Rite, co-owners and head chefs of DanDan and EsterEv in Milwaukee Potatoes might sound boring, but they’re actually one of the most versatile vegetables around, and they’re a great option in the winter.

Recently, Jacobs has been making potato perogies — a Polish dumpling with a savory or sweet filling, cooked in boiling water.

Van Rite likes incorporating smoked and pickled ingredients, and the different flavors they showcase, into his recipes during the winter. Since preserved produce is usually bypassed in the warmer months when harvests are bountiful, winter is a great time to try them out.