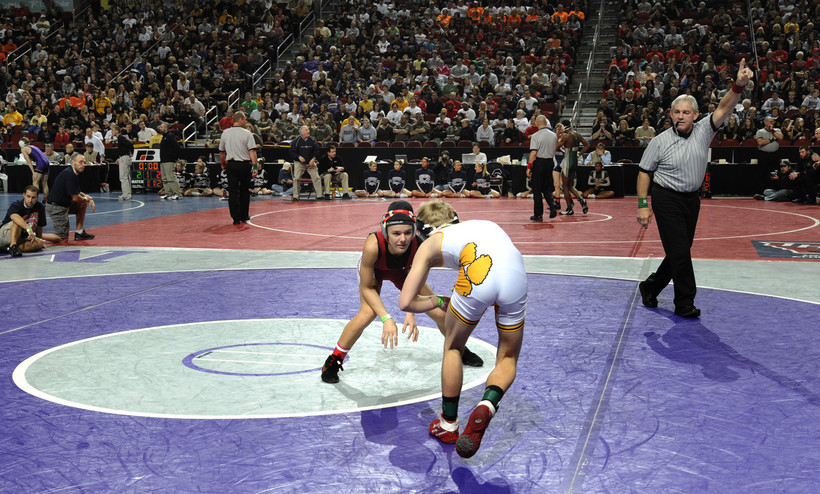 The Tournament Will Take Place On Jan. 29 In La Crosse
By Megan Hart
Share:

The Wisconsin Interscholastic Athletic Association will hold its inaugural girls state wrestling tournament in La Crosse on Jan. 29, 2022, the organization announced this week.

There are already some Wisconsin high schools with large contingents of female wrestlers, including Holmen High School, the tournament’s host.

At Reagan High School in Milwaukee, girls have been wrestling with boys since 2016, athletic director Keith Mayer said. There was no season last winter due to the coronavirus pandemic, but about two dozen girls participated the year before, he said.

"It’s kind of something that just grew within itself," Mayer said. "As long as we continue to foster these positive experiences, it just kind of tends to grow naturally."

Reagan’s female wrestlers have participated in a handful of events for girls, but for the most part, they’re practicing and competing with boys who are in their weight class, Mayer said.

"They do the same drills," he said. "They’re running the same stairs and the same hallway laps and the same cafeteria laps that our guys are running. Really, there hasn’t been a distinction between one athlete or the other."

During the regular season, girls will still be able to wrestle boys in their weight class if there are no female wrestlers on the opposing team who match up. However, the season will culminate with WIAA crowning its first individual girls wrestling champions.

According to the National Wrestling Coaches Association, just six states officially sanctioned girls wrestling before 2018 – Hawaii, Texas, Washington, California, Alaska and Tennessee. Now the number is up to 32.

"The trailblazing girls that signed up for wrestling back in the day, they just wanted opportunities. They wanted something new, and if we can extend that to state-level competition, more power to them. It’s just a great chance for the kids," Mayer said.

"Our goal is that, in several years here, that there will be enough participation to merge it into the current wrestling tournament for boys, and then to have the girls and the boys at the same site," he said.

As with other sports, like swimming or track, individual athletes and teams can win titles in wrestling. For now, there aren’t enough female wrestlers for WIAA to field a team state tournament, but Labecki expects that could change quickly, he said.

He pointed to eight-player football, which started with an eight-team jamboree in 2012.

In the meantime, girls will be able to continue representing their schools at the boys team tournament.