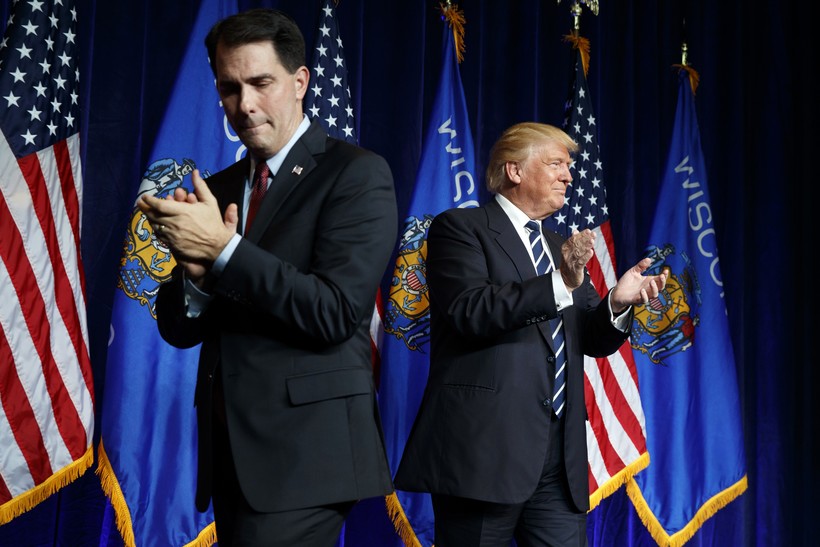 Trump Turned 22 Counties Red As Wisconsin Voted For A Republican For President For The First Time In Decades
By Scottie Lee Meyers
Share:

Heading into Election Day, Democrat Hillary Clinton and her campaign were confident the "blue wall" around Wisconsin would hold up. She hadn't visited the state since April. Afterall, it's been more than 30 years since it voted for a Republican in the presidential race.

But Republican Donald Trump sufficiently crushed the blue wall. As FiveThirtyEight's Harry Enten put it, Trump went right through it like the Kool-Aid Man. For the first time since Ronald Reagan in 1984, Wisconsin was red again.

Trump's victory was led in large part by a shift in rural counties in key swing states, and Wisconsin was no exception. Twenty-two Wisconsin counties switched from Democratic President Barack Obama in 2012 to Trump in 2016 – 18 of those were rural.

Trump won rural voters by a total of 27 points. President George W. Bush never did better than a 10-point margin of victory, and Obama won those voters by 8 points in 2008.

A lot of people, Democrats in particular, are trying to figure out what happened. Mike McCabe, founder and president of Blue Jean Nation, a grassroots organization that aims to "promote the transformation of democratic institutions that are failing America," said white working-class voters in Wisconsin's rural area abandoned the Democratic Party because the party abandoned them.

"In the past, they could see tangible evidence of how Democratic (Party) policies benefited them. They can't see it now," McCabe said, referring to rural voters across the state and nation.

The changing political winds have been in the making for years, said McCabe. He watched his own hometown in Clarke County consistently elect Democrats to represent them in Congress and the state Legislature when he was growing up on a dairy farm to giving Gov. Scott Walker the largest margin of victory in the state in the last gubernatorial election.

McCabe, who is also the author of "Blue Jeans in High Places: The Coming Makeover of American Politics," sensed long ago Wisconsin may go Trump's way. It was a belief reinforced just weeks ago when he spent a day in Tomah and Waupun. He heard from people in both places who said the local town boards were discussing turning their respective paved roads into gravel because they could no longer afford to maintain the pavement.

"If people from communities like that make a trip to Madison to go to a Badger game or they go to Milwaukee to take in a Brewers game, they see all these new traffic circles and cloverleafs and these massive highway expansions, and they can't fill their own potholes," McCabe said.

"They're thinking, 'We're paying our gas taxes, we're paying our taxes, and they go off to Madison or Washington and they never seem to come back here to benefit our communities," he said. "So why shouldn't we just keep government as small as possible and keep our taxes as low as possible?'"

And without question, said McCabe, it's the Republican Party that has branded itself to those sentiments.

But that's not to say the Republicans earned the votes of Wisconsin's working-class residents. It was more so that the Democrats lost their votes as it became a party that hitched its identity to urban enclaves, McCabe said.

"Their leadership is made up of urban people with urban consciousness and urban awareness," McCabe said. "And so they've stopped really having a good feel or an understanding of the rural way of life, the rural sense of place, the unique challenges for rural communities. They don't speak the language of rural people."

In traveling across the state, McCabe said he often heard from people in the cities who told him that rural people were voting against their own interest when they elected Republicans to office. But McCabe always pointed out to them that they were just imposing their own understanding of the rural voters interest onto them.

"You got to find out how they see their interests and make them a better offer then the Republicans are making them," McCabe said

He added that it shouldn't be that difficult because after all, the Republicans aren't doing a lot for rural Wisconsin either.