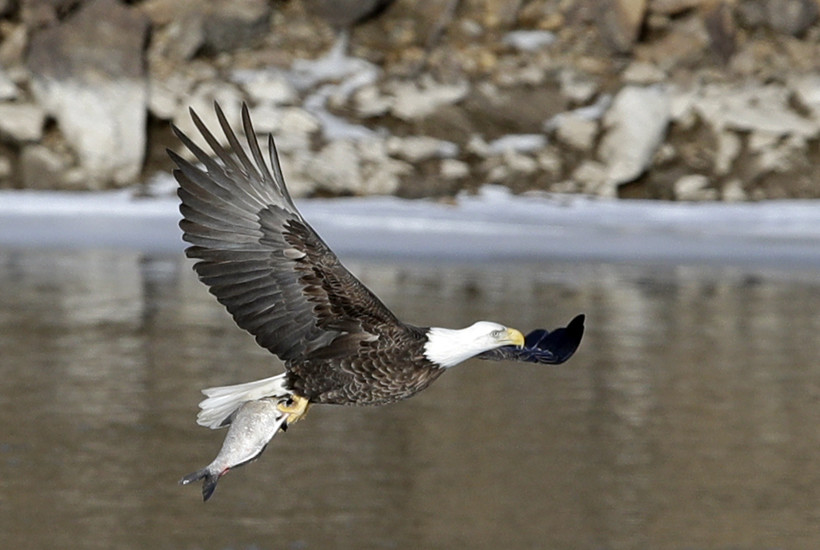 Bald eagles need a half pound to a pound of food per day, according to DNR scientist Laura Jaskiewicz. Orlin Wagner/AP Photo

When It's Below Freezing, Bald Eagles Must Find Areas With Open Water
By Megan Hart
Share:

Winter is the best time of year to spot bald eagles in Wisconsin.

Last year, the Wisconsin Department of Natural Resources counted 1,684 active bald eagle nests across the state. That’s up from just 108 in the 1970s. In 2019, the birds nested in every Wisconsin county except Milwaukee. In winter, however, they congregate near areas of open water where they can catch fish.

That’s why spots along Wisconsin’s largest rivers have become popular eagle viewing destinations. Wildlife centers across the state have begun hosting viewing events each winter. In Kaukauna, 1000 Islands Environmental Center will host its annual Eagle Days event Saturday, Jan 25. In addition to watching for eagles on the Fox River, there will be presentations from the National Eagle Center in Minnesota and even the release of a rehabilitated eagle if weather permits.

When the eagle was found in Manitowoc, it was emaciated and too young to fly, said 1000 Islands director Debbie Nowak. Wildlife of Wisconsin and Raptor Education Group, Inc. treated it and now it’s ready to return to life in the wild.

"Wintertime is an awesome time to release these young eagles because of the fact that there are other eagles around that can kind of be a mentor for this young," Nowak said.

Eagles are most active in early morning and late afternoon, Nowak said. When searching for eagles, birders should bring binoculars and a long camera lens if they plan to take photos, Nowak recommends.

She also said it’s important for people to keep their distance from the animals.

"Especially in the wintertime, it takes a lot of energy to stay warm, to stay healthy, so we don't want them wasting any of those great energy reserves by having to fly away from humans," she said.

The eagles that winter near the Fox River come from across the state. Many also congregate around the Mississippi and Wisconsin rivers, said DNR scientist Laura Jaskiewicz. Spots near dams are especially popular, because the birds can hunt there year-round, she said.

On the Mississippi River, Prairie du Chien will host Bald Eagle Appreciation Days in February. Also on the Mississippi, Wings Over Alma Nature & Art Center has an observation deck where birders can watch eagles hunt downstream of Lock & Dam No. 4.

Fish account for the majority of a bald eagle’s diet. Eagles hunt throughout the winter, requiring a half pound to a pound of food per day, Jaskiewicz said.

Bald eagles are doing well in Wisconsin. The DNR counted 11 fewer nests in 2019 than in 2018, but it’s not a concerning difference, Jaskiewicz said. The number of nests in southeastern Wisconsin actually increased by 27 percent, she added.