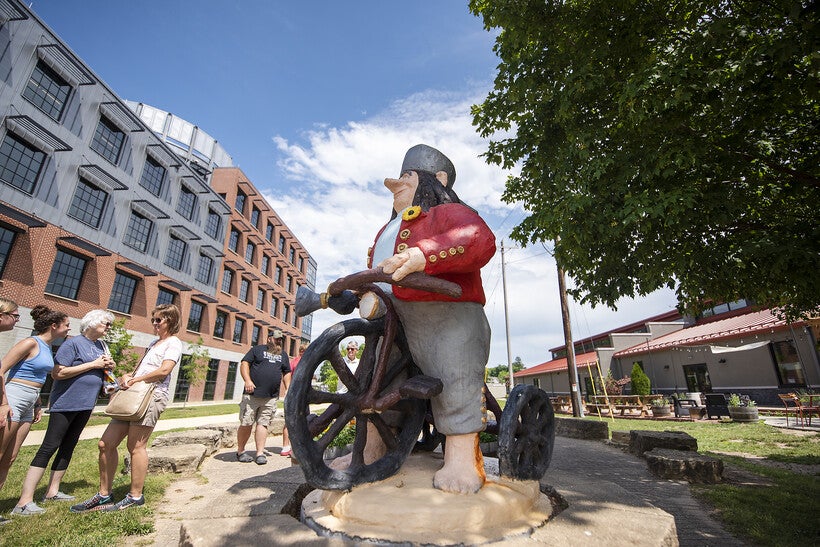 Why is Mount Horeb the 'troll capital of the world'?

In this village, trolls are protectors of residents, small businesses and nature
By Tim Peterson
Share:

What’s the deal with the trolls?

Trolls are everywhere you look in the Dane County Village of Mount Horeb.

Troll cartoons are on the street signs, and troll footprints are on the sidewalk. There are can’t-miss troll sculptures along Main Street and in front of buildings, including the Mount Horeb Area Chamber of Commerce (the Mayor Troll presides here), American Family Insurance office (where Wavin' Walton and the troll under the bridge hang out), and Open House Imports Scandinavian gift shop (where Troll Odin kicks it).

Lia Jaber, a senior at Madison East High School, has frequented a Mount Horeb tea shop with her family and a family friend of Norwegian descent many times over the years. She, too, wondered what was up with all. the. trolls.

So, she sent questions to Wisconsin Public Radio’s WHYsconsin hoping to get an answer: How exactly did Mount Horeb, Wisconsin become the troll capital of Wisconsin, and (how) is the Norwegian culture still so alive and prevalent?

The easy answer is marketing, Udelhoven said, but we won't leave it at that. We want to share the story behind said marketing push. 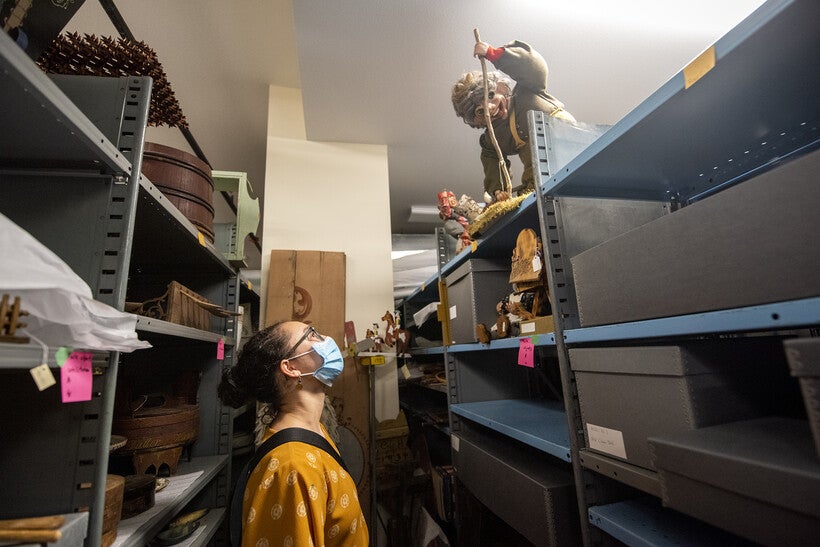 To begin, WPR’s "Central Time" reached out to longtime Mount Horeb resident Jim Leary. He’s professor emeritus of folklore and Scandinavian studies at the University of Wisconsin-Madison. He also co-founded the Center for the Study of Upper Midwestern Cultures.

Leary said that Mount Horeb and the hinterlands surrounding it, out to Blue Mounds, was an area of strong Norwegian settlement in the mid-19th century. A second wave of Norwegians arrived — newcomers to work for the first, more settled wave — in the late 19th century. Leary said Mount Horeb has had a mix of Swiss, German, Irish, and Cornish settlers, but the dominant immigrant group was Norwegians.

"The face of the village has a lot that says 'Norwegian,'" Leary said. "In the way that people associate New Glarus with Swiss identity, or Cedar Grove over in Sheboygan County with being Hollander, from Dutch, there are these community identities that sometimes tie in with ethnicity, and Mount Horeb has chosen to promote Norwegian-ness."

He highlighted the big water tower on the east end of the village that is decorated with rosemaling, a Norwegian floral painting. There’s also banners on the Main Street lamp posts with more rosemaling motifs and the word "velkommen," Norwegian for "welcome."

Visitors will also see a chamber of commerce and railroad depot-turned rest area, built in the style of Norwegian stave churches. Many businesses have Norwegian or Scandinavian names, like the restaurant Skål Public House.

Leary said that beyond the physical examples of Norwegian culture in Mount Horeb, there’s also a lot of "intangible cultural heritage," that exists.

"You know, people having coffee, saying expressions like, 'Uff da!' — these expressions of kind of amazement or exasperation — telling an occasional, Ole and Lena joke, and, you know, slipping into dialect (are) some of those kinds of things," he said. 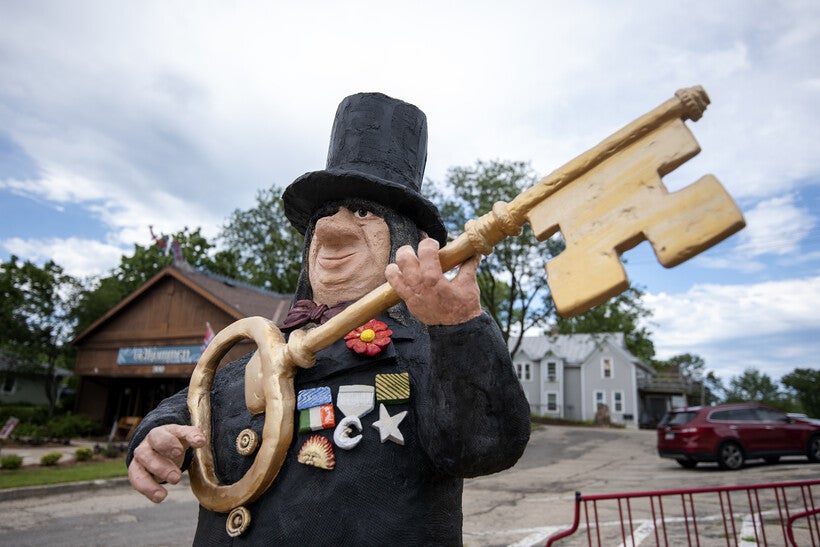 The mayor troll is on display outside of the Chamber of Commerce on Tuesday, July 19, 2022, in Mt. Horeb, Wis. Angela Major/WPR

In Mount Horeb, there’s a Sons of Norway Lodge, a fraternal life insurance company focused on preserving Norwegian heritage and culture, and a Lutheran church community with a strong Norwegian influence, Leary said.

The prevalence of the Norwegian heritage in the community can also be linked to Little Norway, a living museum just outside the village that closed nearly 10 years ago. Norwegian-style buildings sat on the 40-acre site that drew tourists to the area for decades. And into the 1990s, Mount Horeb put on an annual pageant called "Song of Norway," based on the life of Norwegian composer Edvard Grieg. Many may be familiar with his "Peer Gynt" musical suite that includes the well-known section, "In the Hall of the Mountain King," where the king is an imaginary troll. 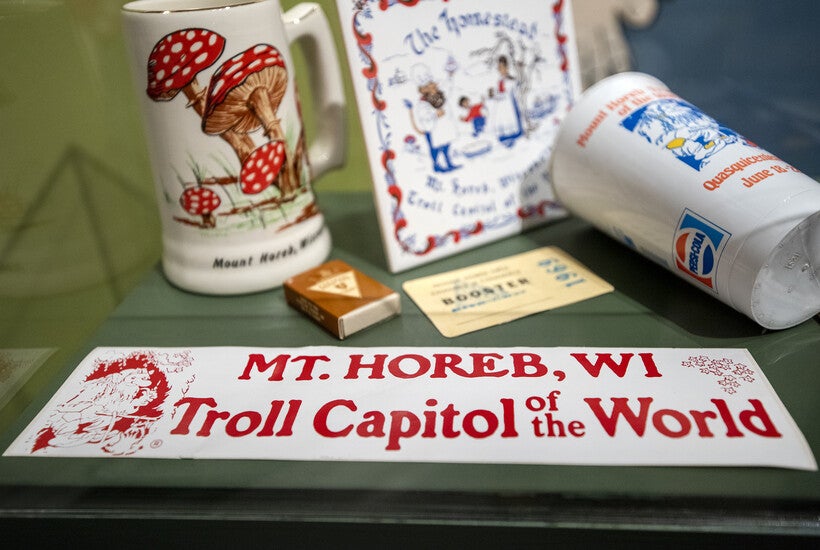 A photo of Oljanna Cunneen is pinned up in Michael Feeney’s studio Tuesday, July 19, 2022, in Mt. Horeb, Wis. Angela Major/WPR

Now, the trolls around Mount Horeb aren't quite what the village's Norwegian ancestors might have imagined. But they represent an evolution in how trolls are depicted, Leary said.

"Trolls are these ugly and somewhat dim-witted and powerful — physically powerful — ancient figures who are associated with Norway's ancient pagan past and often its environment, dwelling in caves and mountains and sometimes in forests," Leary said.

In the 19th and early 20th century, things such as illustrated folk tales and the work of Grieg created more of a nostalgic appreciation for the once-terrifying figure.

"The troll became this kind of visible symbol of Norwegian folklore, and the people of Mount Horeb could draw on it," he said.

Mount Horeb trolls have come in many shapes and sizes over the years, much more cuddly and friendly than the monstrous and nightmarish characters from Norwegian folklore. Many two- and three-dimensional trolls crafted by resident Oljanna Cunneen are preserved in the Driftless Historium. Leary said she made little sculptures representing different professions — the barber, the dentist, the butcher — people had in town.

After getting to see a few examples up close, Jaber thought they had "a joyous energy," but still found them to be a little more scary than trolls carved by local artist Mike Feeney. (More on those trolls and Feeney in a bit.)

Then there are the trolls that welcome people to a gift shop called Open House Imports.

Owner and Mount Horeb resident Janice Sievers said her in-laws opened the Scandinavian shop in 1966. In 1975, they imported a pair of big, rubber latex trolls from Norway to welcome people to the store, and the village. The names of the trolls? Olaf and Troll Odin. 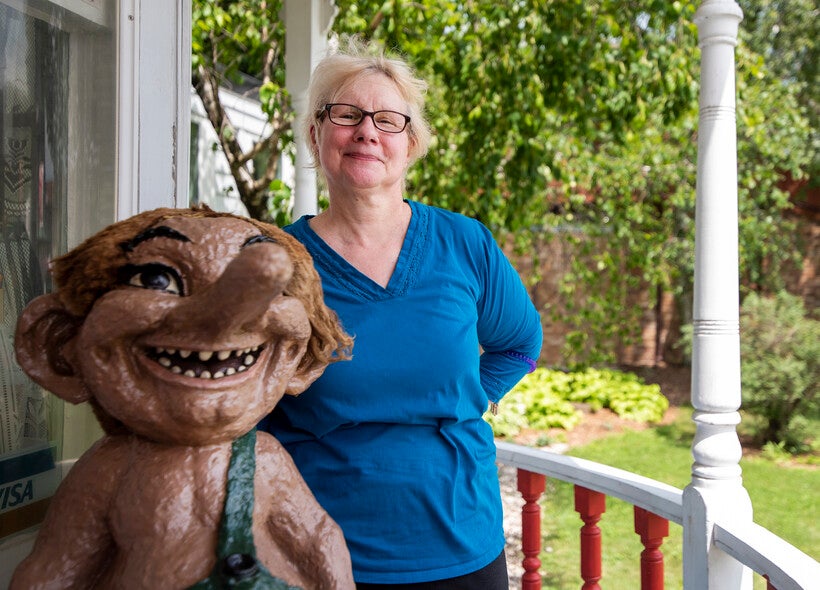 Shortly after Olaf and Troll Odin arrived, construction of the U.S. Highway 18/151 bypass routed traffic away from the village. In a "meeting of the minds," as Leary described it, Mount Horeb leaders decided promoting the Norwegian heritage and experience might help draw visitors back to the community.

Feeney, the artist, was asked to grow the village’s troll population to bring back traffic. His first sculpture for Mount Horeb, going back to the late 1980s, is called "The Chicken Thief."

"After the first one, they said, 'Let’s do another one,'" said Feeney. Now, he thinks he’s created north of 40 pieces, of various sizes, for the village. They’re carved from logs or sculpted from mixed media, and dot Main Street. Some characters include "The Accordion Player," "Sweet Swill," and "The Gardener." 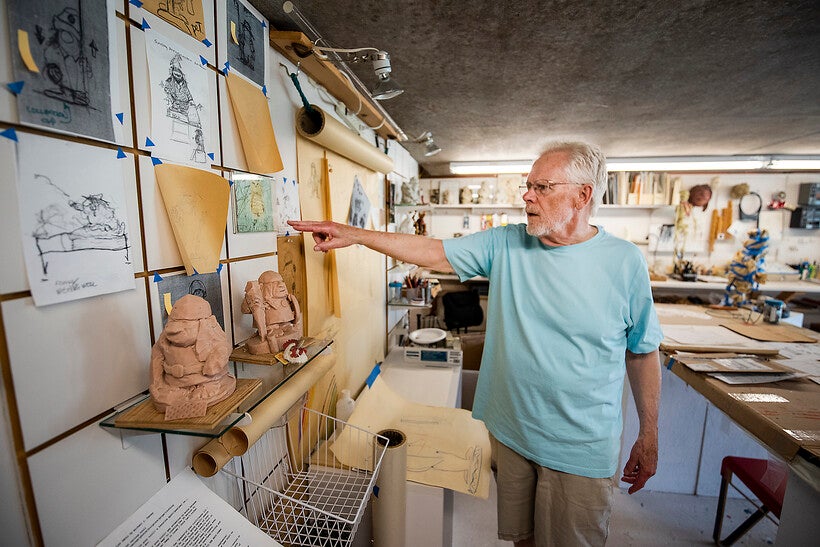 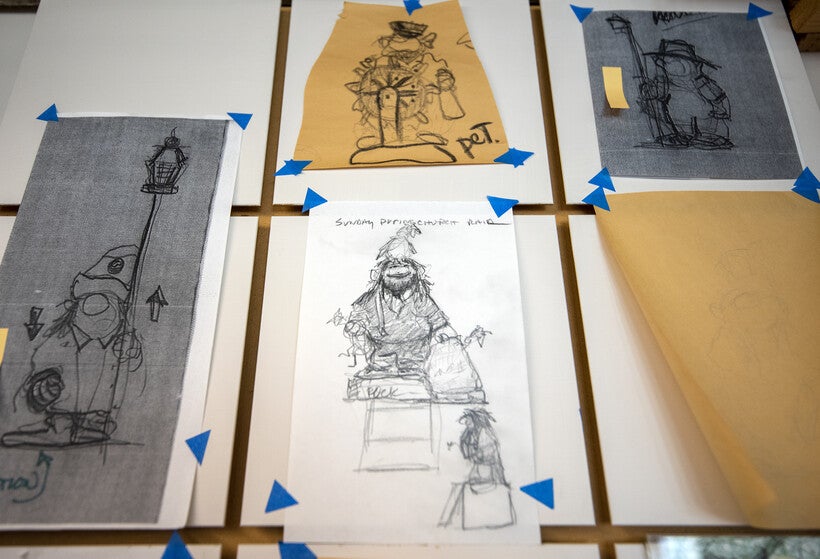 A drawing of a troll is on display inside of Michael Feeney’s studio Tuesday, July 19, 2022, in Mt. Horeb, Wis. Angela Major/WPR

Aside from being a community mascot, the trolls are protectors, said Rachel Lacasse-Ford, executive director of the Mount Horeb Chamber of Commerce.

"Trolls are guardians of jewels," Lacasse-Ford said. "So they protect the things that mean the most to us, which are our residents, our small businesses, so that’s what makes our Main Street unique and fun."

Udelhoven, of the Driftless Historium, said the trolls also protect this special piece of Wisconsin land.

"We value our landscape around here, the Driftless — we have different ecosystems like nowhere else in the world, because the glaciers didn’t trample us," she said. "We like to say the trolls are protecting these unique landscapes for us."

Feeney's trolls, in concert with the troll branding around the village, seemed to work when it comes to creating fun and attracting people from out of town.

Visitors love taking photos with the outdoor trolls — including a busload of Norwegian tourists who happened to share a love of accordions with one of Feeney's figures. His "Tricycle Troll" gets a lot of attention from bike clubs due to the proximity to the bike path, which happens to also be beside Brix Cider.

"He has an active life after bar time," Feeney said of Tricycle Troll.

Once there were enough trolls and troll paraphernalia along Business 18/151 (part of which is Main Street) it earned the puny nickname "Trollway," and the phrase "Take the Trollway through Mount Horeb" became a key marketing slogan. In August 2016, the community made it official and went through the process of trademarking "Troll Capital of the World" with the federal government.

Lacasse-Ford is in charge of maintaining the Trollway, which includes keeping up Feeney’s sculptures. She’s also working with new artists to add to the collection, including a reclaimed metal artist and a new wood carver.

"I know all his trolls," she said, "but I’d never actually met him. It was like meeting a celebrity."

For Udelhoven, she sees it as funny that current construction on the existing U.S. Highway 18/151 bypass is actually diverting highway traffic back to Mount Horeb. Some residents are happy; for others, it’s too much.

"It struck me the other day that people are never happy about anything, which is sort of troll-like, I guess," she said. 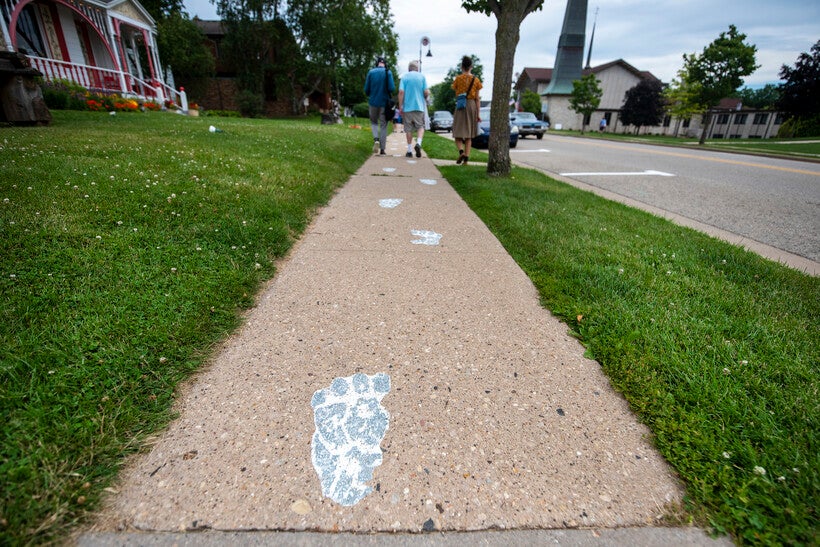 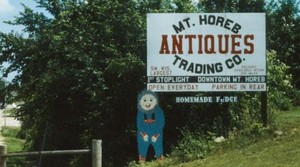 A folklore expert -- and longtime Mount Horeb resident -- answers a WHYsconsin question about the Wisconsin village's Norwegian cultural roots, and its thing for trolls.

This segment was inspired by an audience...