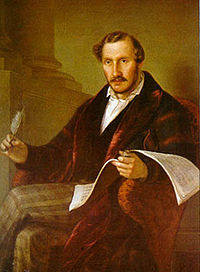 Why I Took The Job

Did doubts about the job’s merit prompt Antonio Vasselli to take his brother-in-law to task for accepting a position in Vienna? Or was he more concerned about losing an Italian composer to the Austrian Emperor at a time when Italians were asserting their national identity? One way or the other, Gaetano Donizetti felt compelled to justify himself.

With enthusiasm he had written to a friend in June 1842, just before his appointment was confirmed:

You should know (and this is a secret for now and I implore you to keep it one) that I was called to Court to find out if I would accept the post that Krommer, Mozart, and Kozeluch, and others had held, namely, Kapellmeister to His Majesty the Emperor, accountable only to him through the Grand Chamberlain. I would be expected to direct concerts in the royal apartments only two or three times a year, with additional pay for every cantata that might be commissioned, every year having five or six months off, with an honorarium of three thousand a year. I said if His Majesty wished, I would serve for nothing.

Donizetti accepted the position gladly, thinking that his place in music history was secure.

When Vasselli rebuked him, Donizetti was quick to defend his decision:

Faulting me for accepting the most honorable post is unfair. Six months off are a fine thing; a thousand lire a month at Vienna and away are not to be sneezed at. Do you know that in Bologna they only wanted to give me three months off at a time? Are you aware that I would have to be in Bologna on Saint Petronio’s Day? That it would not suffice to write new music, that I would be wanted there in person?

Are you aware, for that matter, that the position was Mozart’s? That His Majesty expects only two concerts a year and that if I am commissioned to write music, I am paid for it?