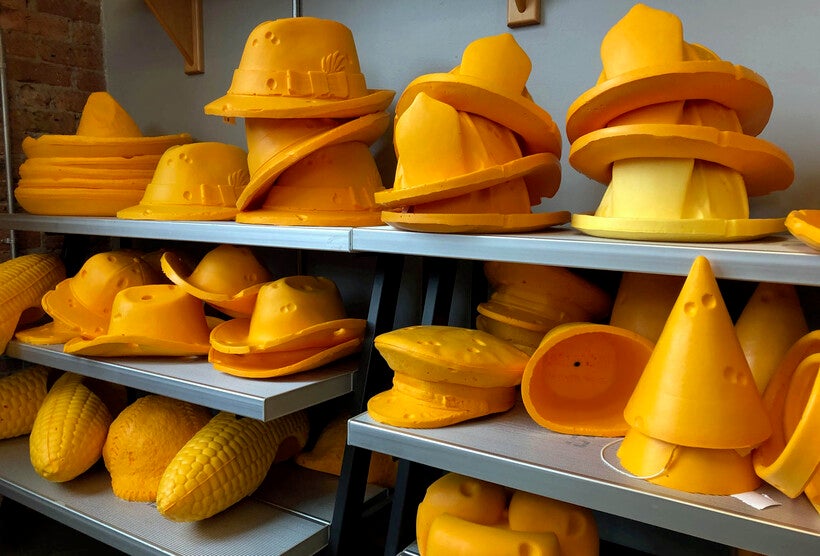 Some of the different types of finished cheeseheads can be seen in the retail space at the Foamation building in Milwaukee, Wisc. Maureen McCollum/WPR

Why Do People Wear Cheeseheads?

The Cheesy History Behind The Cheesehead And How They Came To Be
By Maureen McCollum
Share:

We recently received a WHYsconsin question from a listener named Patti. She asked, "Why are people into wearing cheeseheads?"

Many Wisconsinites have personal reasons for plopping giant triangles of yellow foam on their heads or wearing wedge earrings to every Wisconsin sporting event — from football to baseball, college to the pros. Some say that cheeseheads can even save lives during a plane crash.

But let’s go back to the beginning, to one of the first times a person cut up a piece of foam, declared it cheese and wore it on their head.

It all started with taunts from Chicago sports fans in the 1980s. 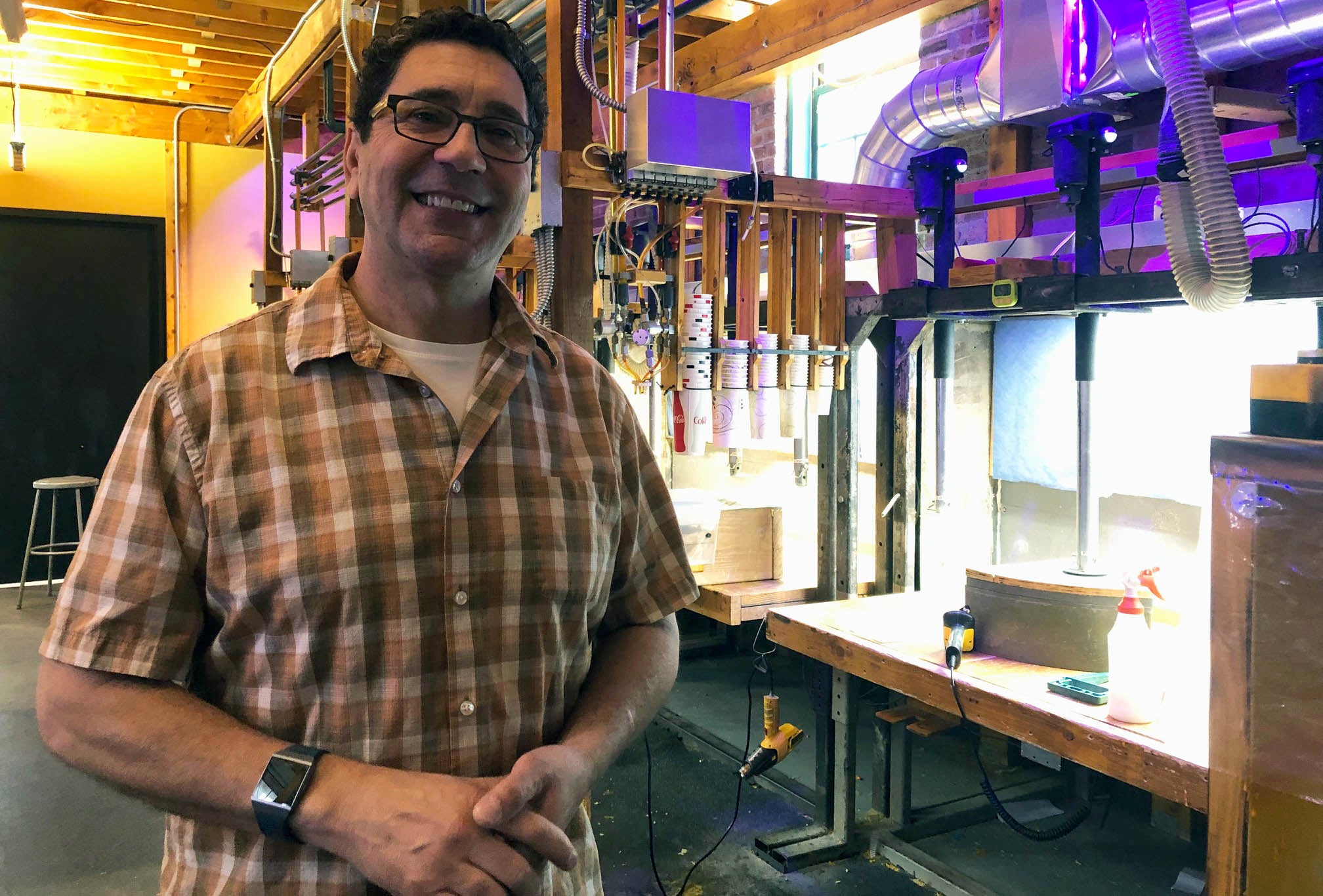 "Our lovely neighbors to the south from Illinois have been affectionately calling us Wisconsinites cheeseheads for quite a period of time. Even though they love to spend their time and money up here, which is great, you know, they call us cheeseheads," said Ralph Bruno, founder and owner of Foamation, which makes the iconic cheesehead hats. "It didn't offend me because, personally, I love cheese."

Bears, Cubs, and White Sox fans weren’t the first group of people to use the term "cheesehead" disparagingly. The Nazis called Dutch people "cheeseheads" or "kaaskop" — meaning stupid or dense — while invading their country during World War II.

The Illinois insult was more likely tied to the fact that Wisconsin dominated United States cheese production in the 1980s, churning out more than 1.5 billion pounds each year.

Bruno decided he wanted to own the insult. So, while reupholstering his mom’s couch in 1987, he cut out a triangle chunk of foam, burned holes into it, and painted it. He threw the hat into a bag and went off to Milwaukee County Stadium to tailgate with his friends before a Brewers game.

"We were having our Pabst Blue Ribbons and my buddies didn't know I had this thing in the bag," Bruno said. "When it came time to go into the game, I pulled it out and put it on my on my head and people started calling me a cheesehead and pointing at me." 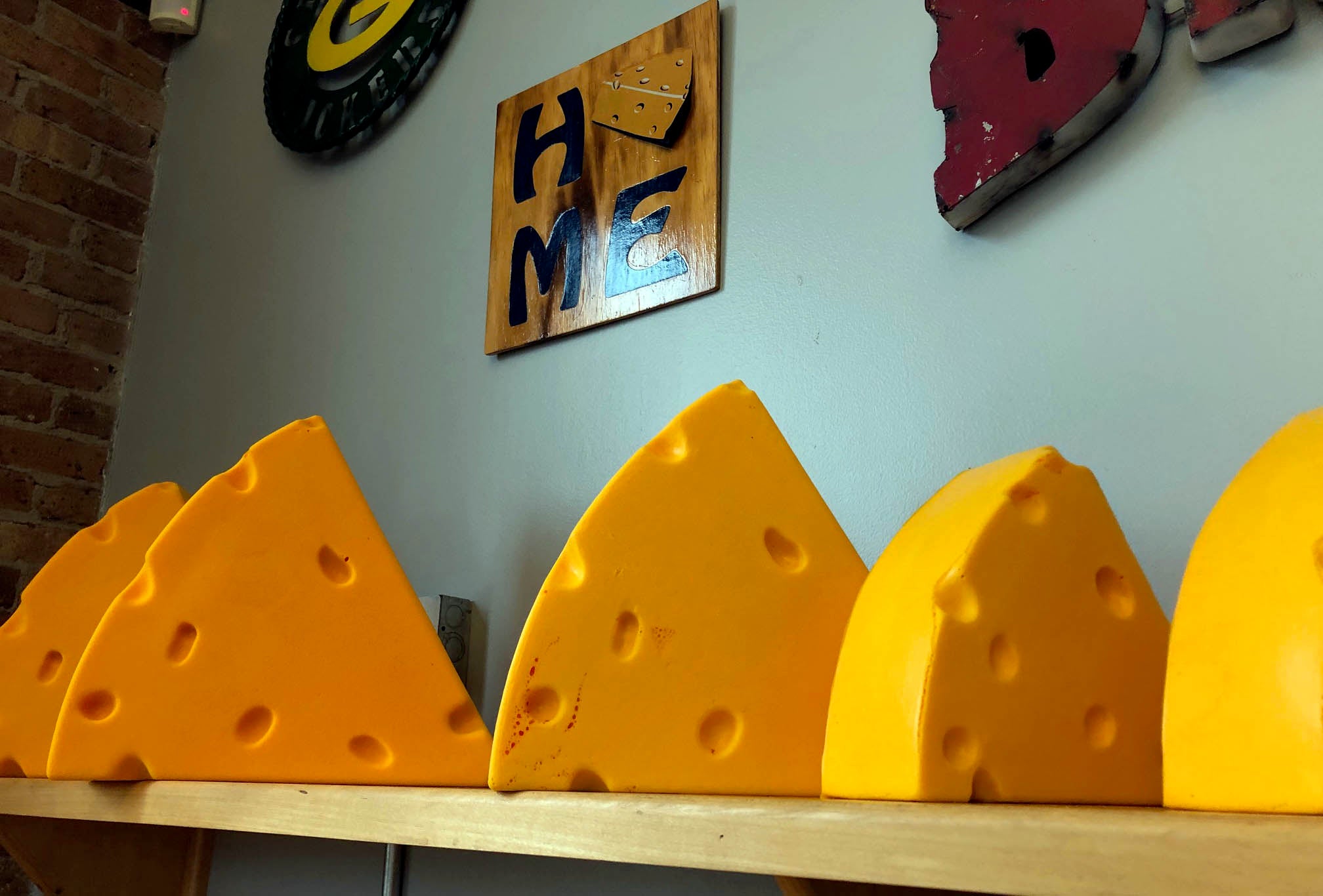 Classic cheesehead hats in the traditional wedge shape can be seen in the retail space at the Foamation building in Milwaukee, Wisc. Maureen McCollum/WPR

Bruno said it was embarrassing for him at first because he considered himself a shy guy. His friends were shocked and some started heading in the other direction.

"Then a girl came running up to me and wanted to try it on," Bruno said. "My buddies were watching how girls were running up to me for the first time ever. And so they then took the hat and we had fun playing with it throughout the game."

It was an a-ha moment for Bruno. He had a background in pattern making, so throughout the game he was thinking about how he could fabricate molds to make more cheesehead hats.

Two weeks later, Foamation was up and running. 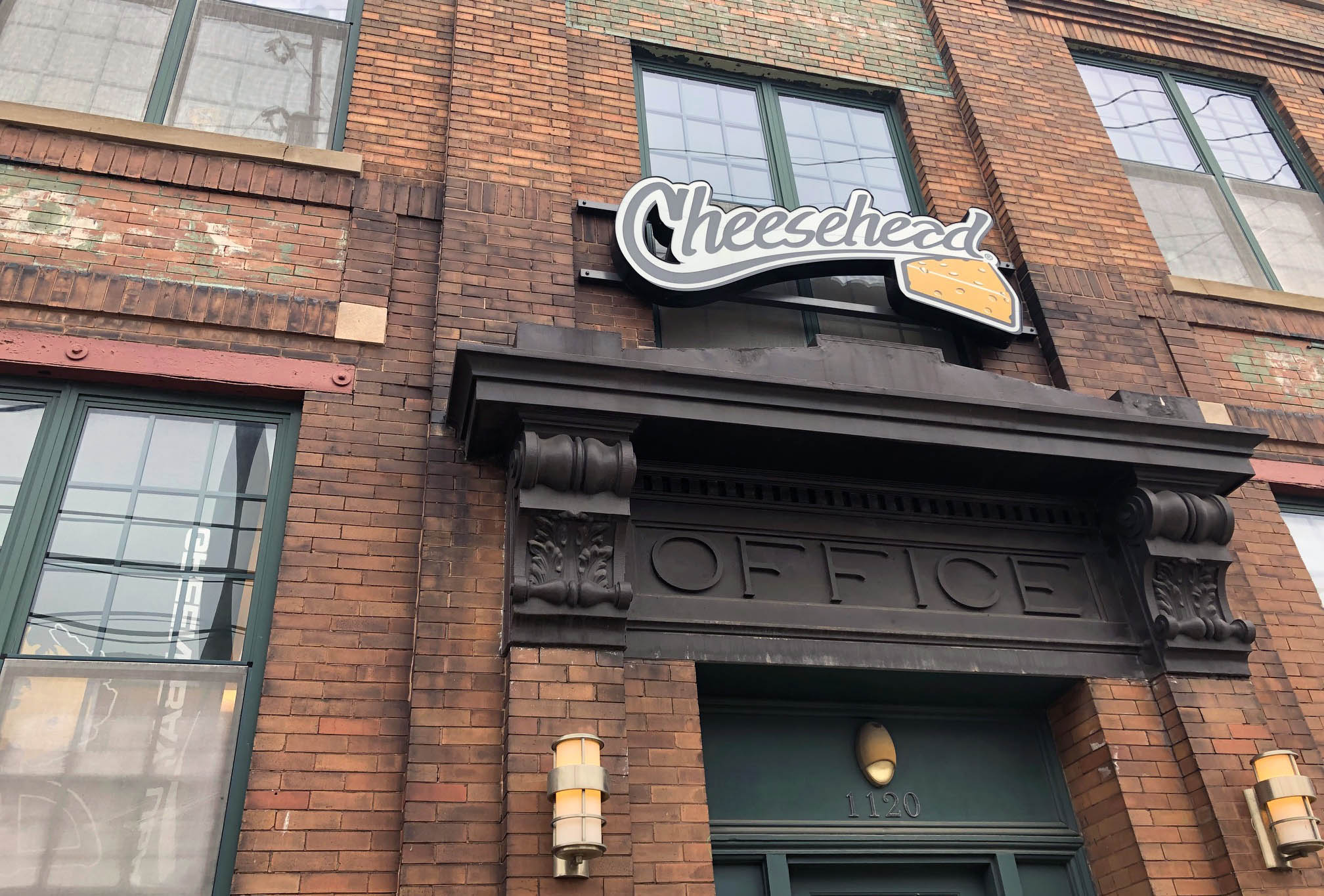 In The Milwaukee Factory

Today, Foamation employees produce everything from foam cheese bowties to Christmas tree toppers. They also give tours and host events at the factory in Milwaukee’s Walker’s Point neighborhood. People can even make their own cheeseheads while visiting the facility on 1120 S. Barclay Street.

He preps a mold and fills a cup with bright yellow liquid before pouring it into the mold. It starts to form and harden quickly. 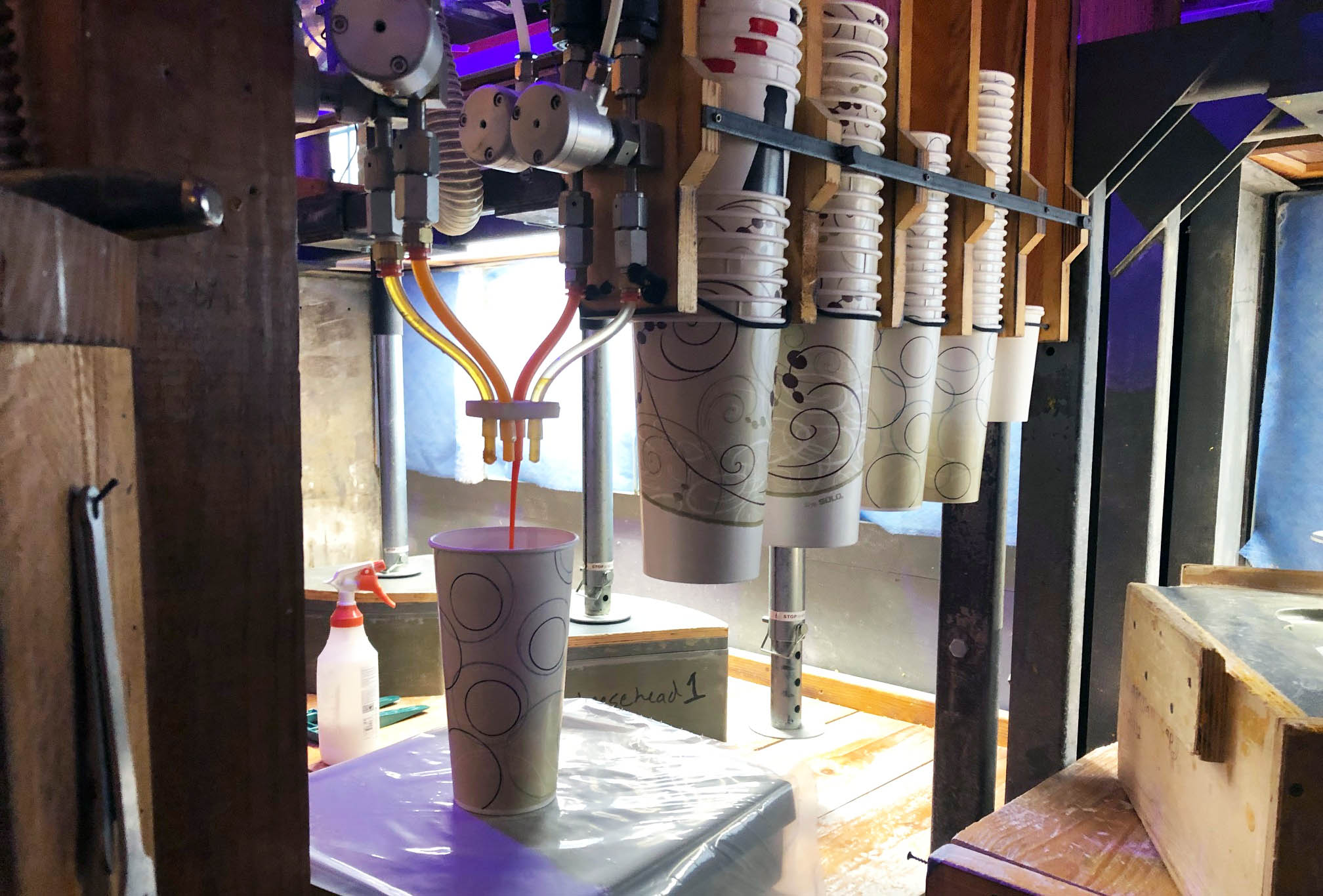 Colored liquid is dispensed into cups before it's put into molds for different hats. Maureen McCollum/WPR 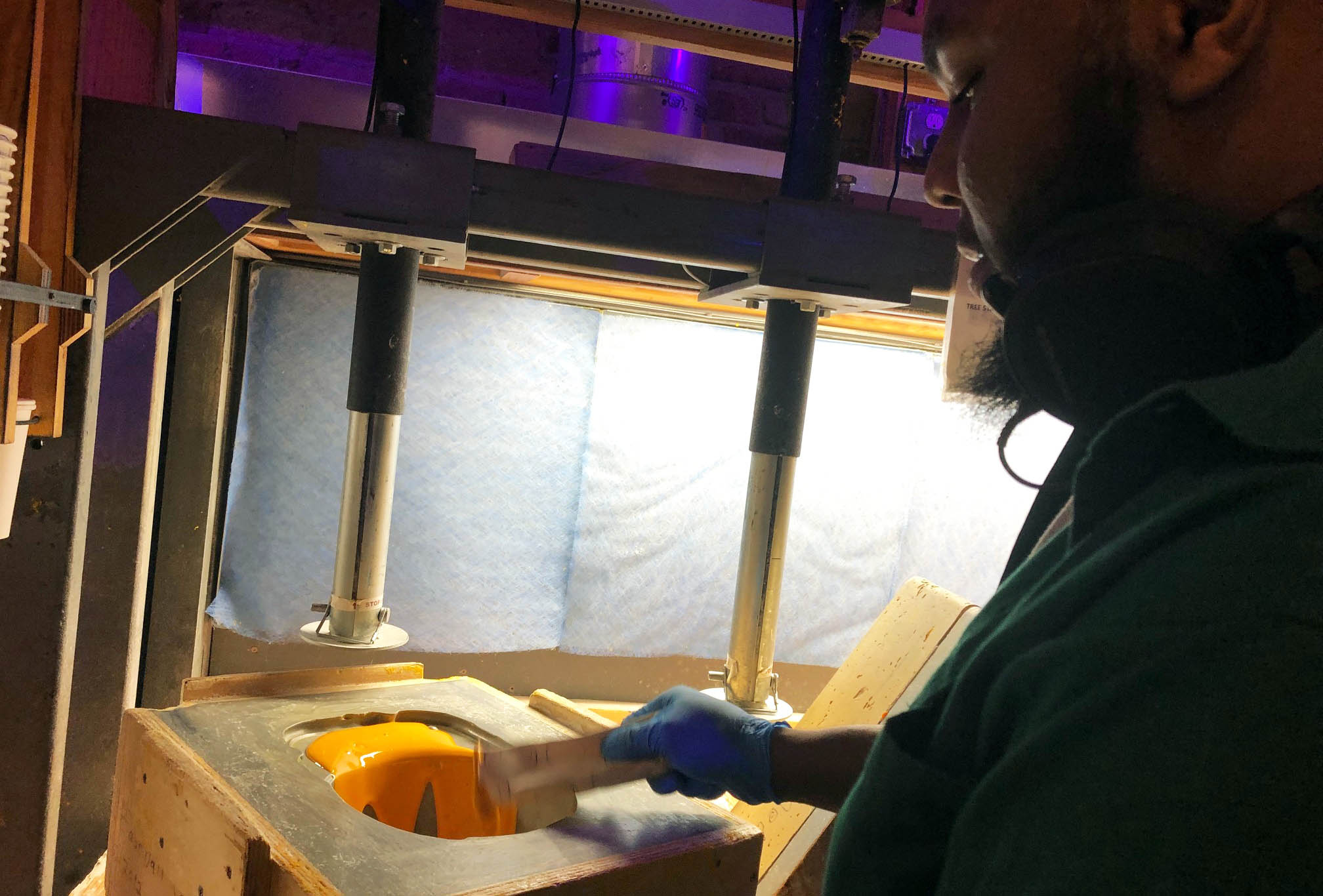 CJ Williams pours the liquid into the mold for a baseball cheesehead hat. Maureen McCollum/WPR 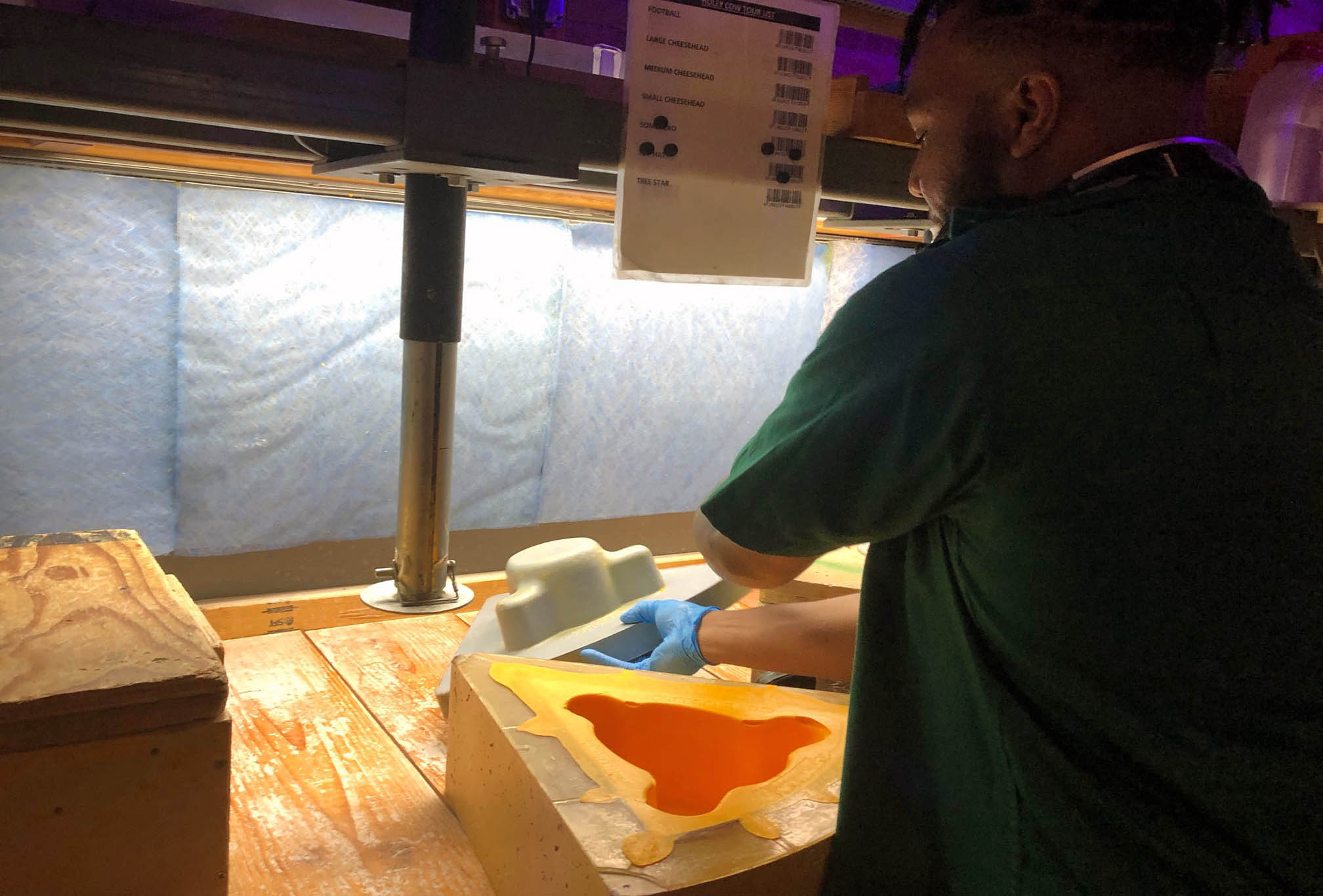 CJ Williams removes part of a mold for the classic cheesehead hat he is making. Maureen McCollum/WPR 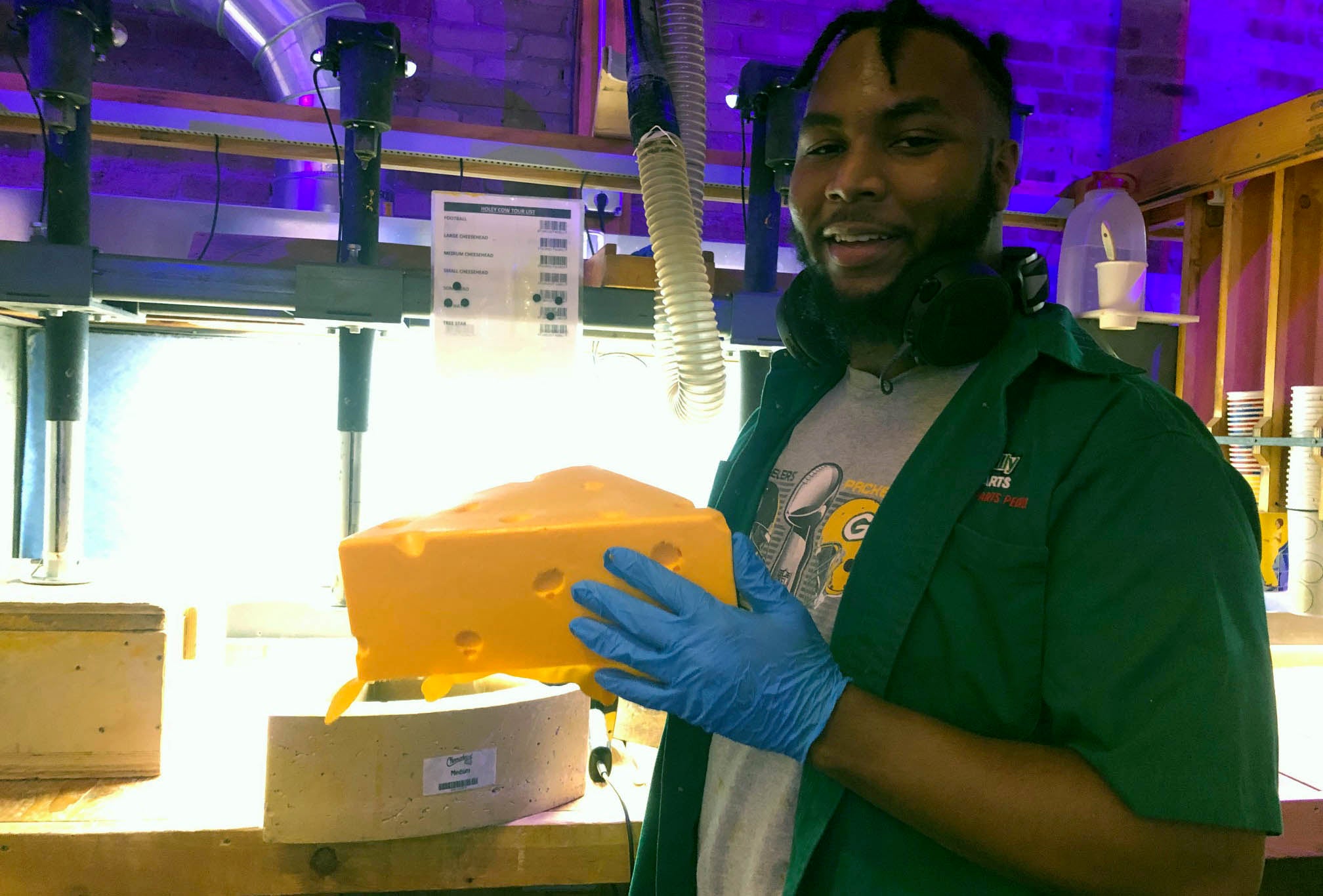 "It’s cool. How many people can say they work where they make cheeseheads?" Williams said. "People are like, they make them in Green Bay, but really they make them here!"

Williams said making cheeseheads is a fun job. Although he’s a Baltimore Ravens fan (linebacker Ray Lewis was his favorite player growing up), Williams is wearing a Packers Super Bowl T-shirt to work.

"I live in Wisconsin, I always support the cheese," Williams said.

Williams and his Foamation co-workers also make foam hats for fans outside of Wisconsin. There’s the cornhead hat for Nebraska Cornhuskers fans and the buffalo chicken hat for wing lovers at a restaurant in Buffalo, New York, that claims to be the home of the original chicken wing. 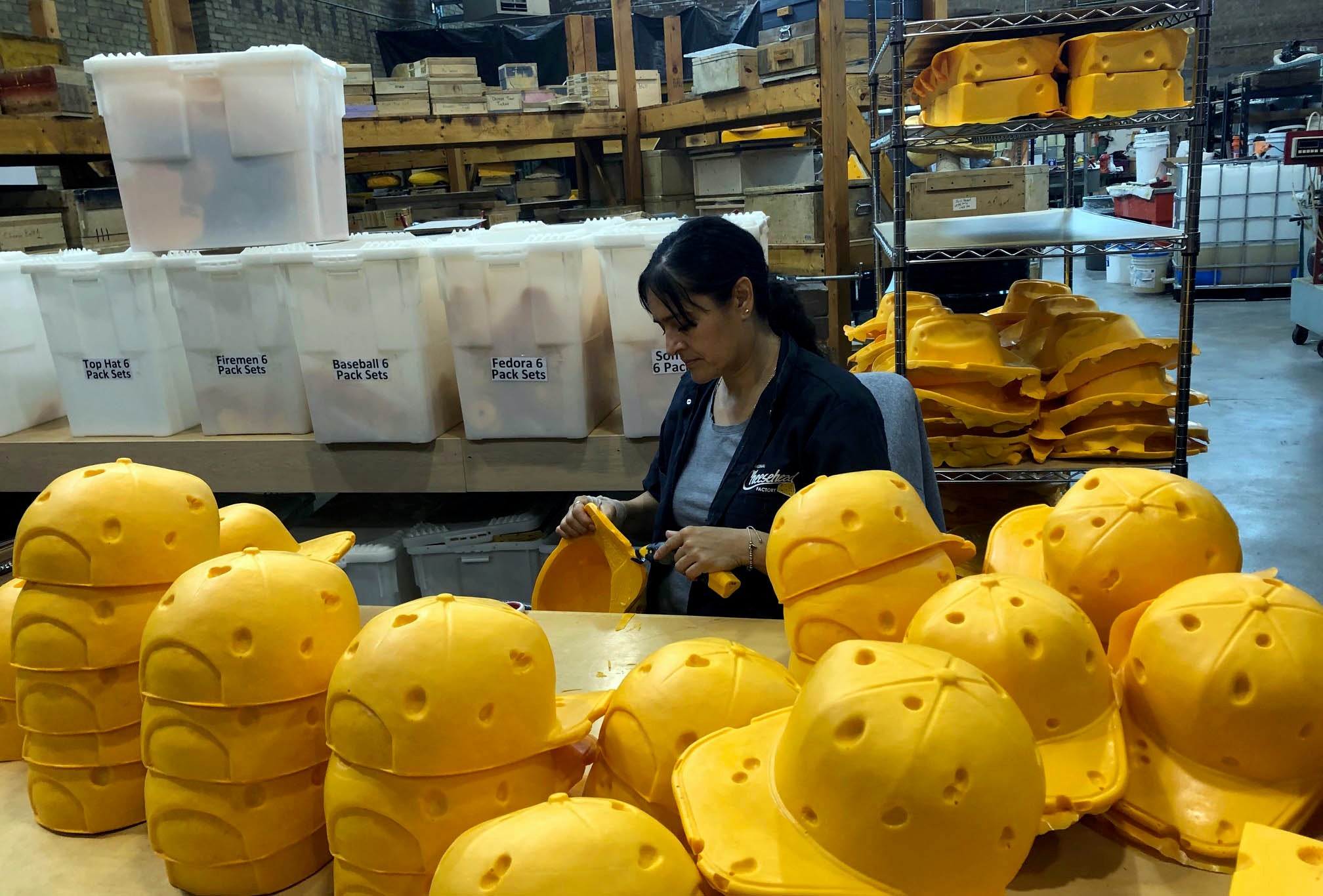 Maria Ruiz stands on the factory floor trimming excess foam off cheehead hats in the shape of baseball hats. She has worked at the company nearly 10 years. Maureen McCollum/WPR

Bruno wouldn’t say how many cheeseheads Foamation has made since it opened its doors in the '80s, but he did say: "If you take a cheesehead and put it on the ground and line it up in California, you would end up touching the ocean in New York. It would go across the country."

A standard cheesehead is 15 inches, and he wants us to do the math.

About 20 years ago, cheeseheads made the leap from Bruno wearing one at Milwaukee County Stadium to Lambeau Field, home of the Green Bay Packers. At first, Bruno started seeing foam cheese cowboy hats popping up at Packers games. Eventually, the wedge hats were everywhere in the stands.

"In the mid-90s when good ol’ Brett Favre came into town, it kind of exploded on the scene there in Lambeau," said Bruno. "That year, we couldn't make enough of them. We expanded our production like 600 percent and we still couldn’t keep up with demand."

It was around that time that cheesehead disputes and lawsuits sprung up that involved rivaling companies. In the end, Foamation prevailed. And even though cheeseheads aren’t endorsed by the NFL, they are sold through the Packers Pro Shop at Lambeau Field. Similar cheese personifications have surfaced and stood the test of time, like TJ’s Cheddarheads in La Crosse.

All these images and products have helped Wisconsinites and others take ownership of the word cheesehead.

"It’s like a badge of honor. It’s really more about the essence of who we are and you don’t have to be born here," Bruno said. "It's grown outside of just the cheese and more about the mindset of the Midwestern mentality. The openness that we have. The outgoingness that we have. It’s not just somebody wearing a hat. It's the pride that we're from Wisconsin or the Midwest. It's a bit of a cultural thing, I guess." 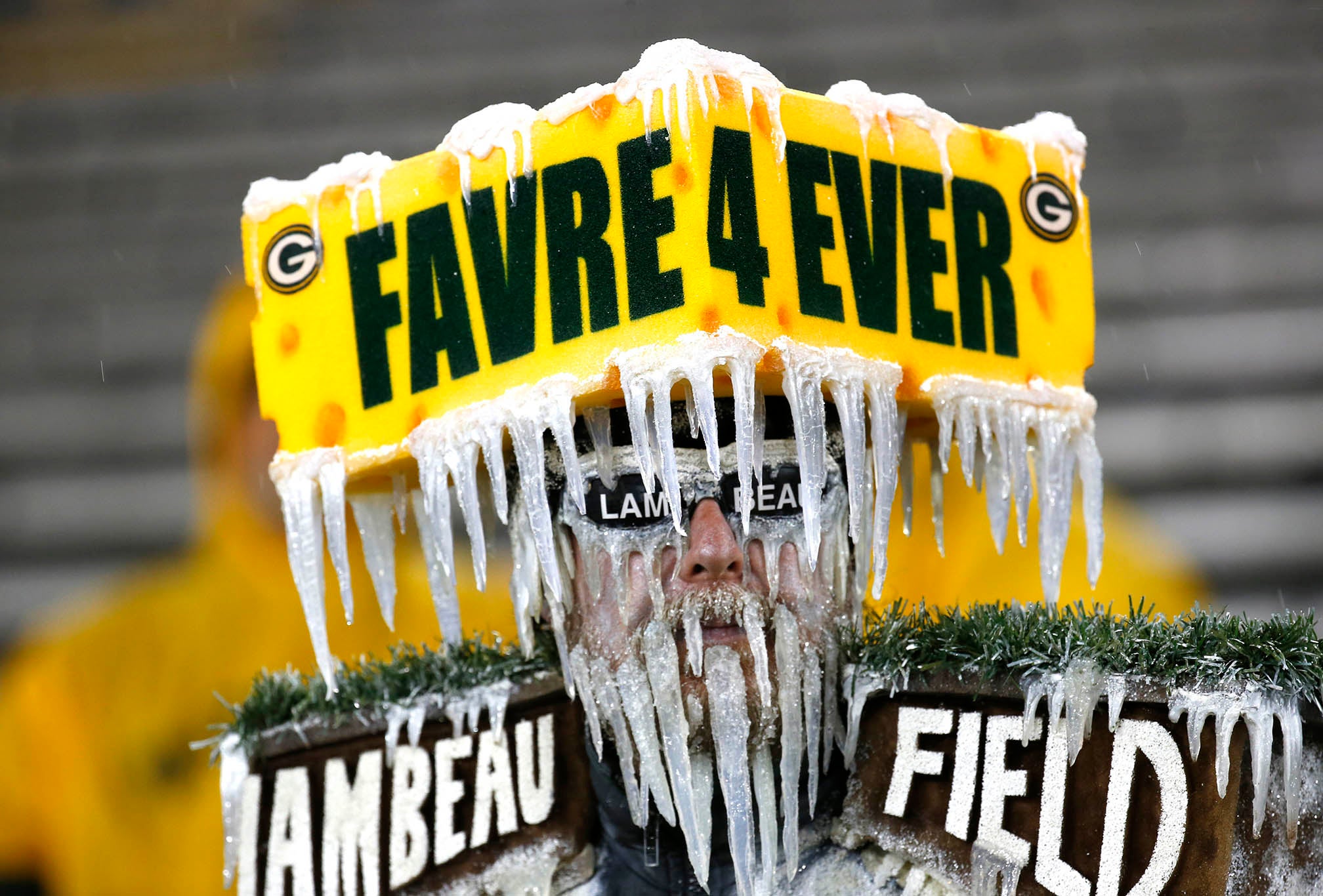 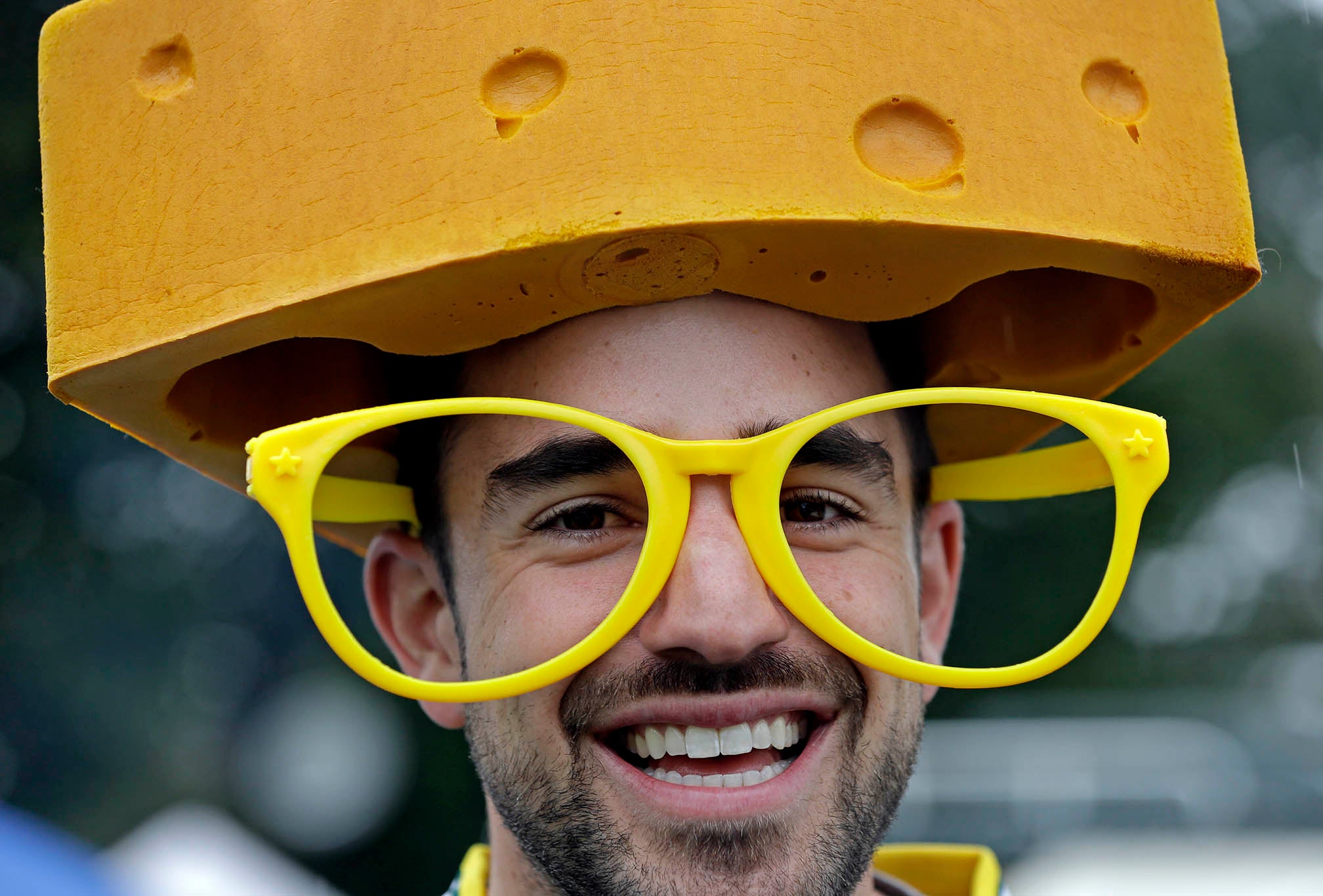 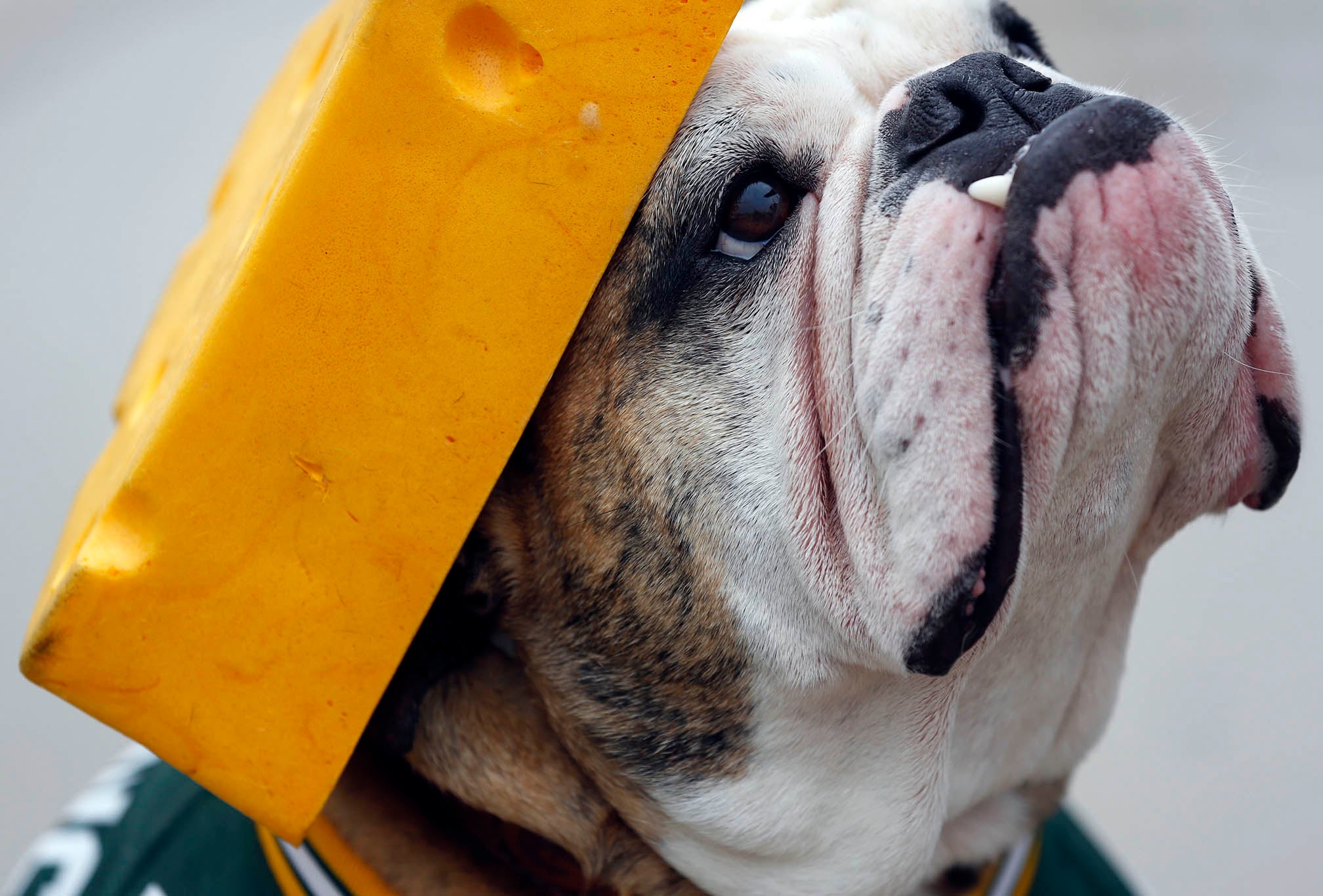 A dog wears a cheesehead outside Lambeau Field before an NFL football game on Sunday, Sept. 15, 2013. Mike Roemer/AP Photo 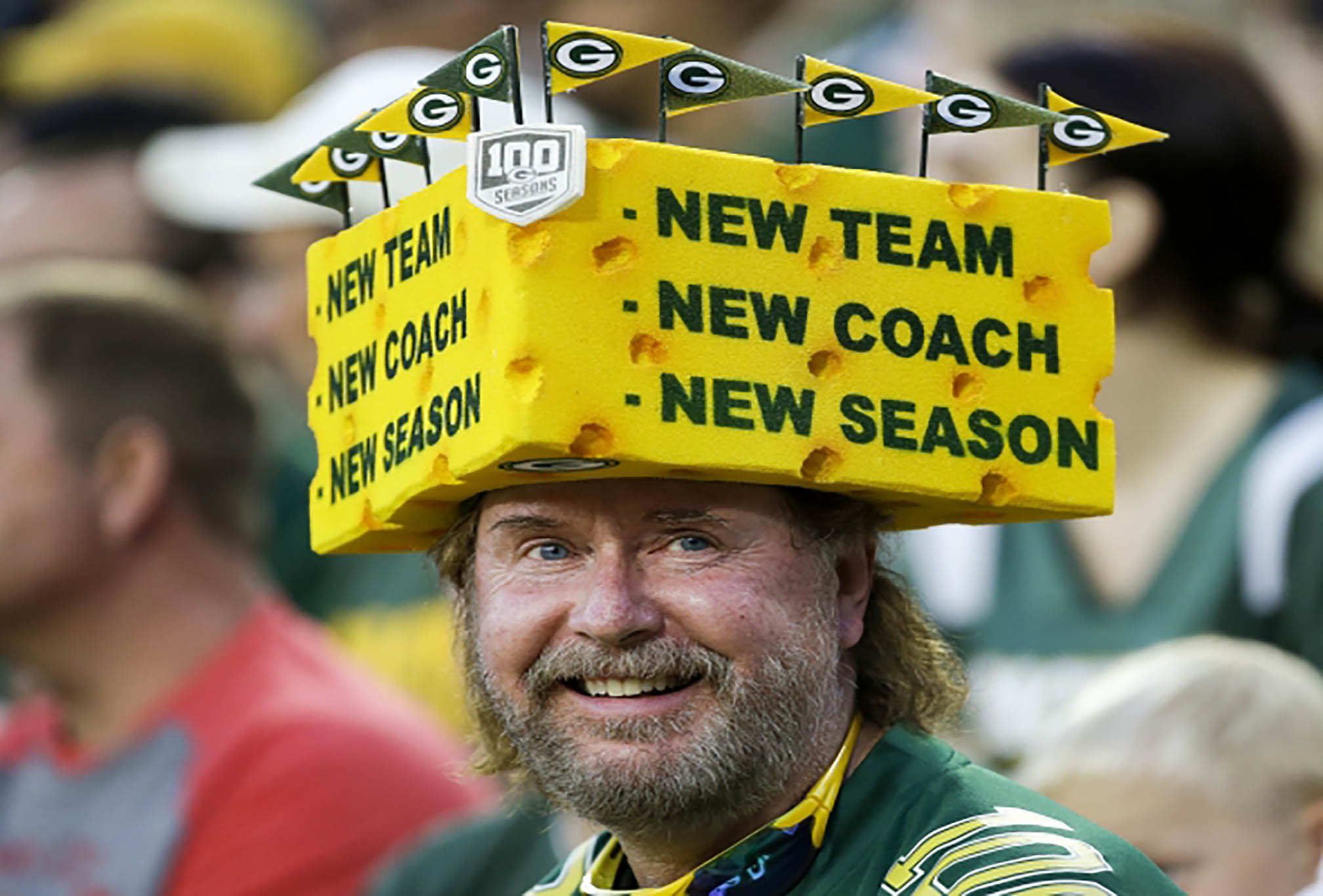