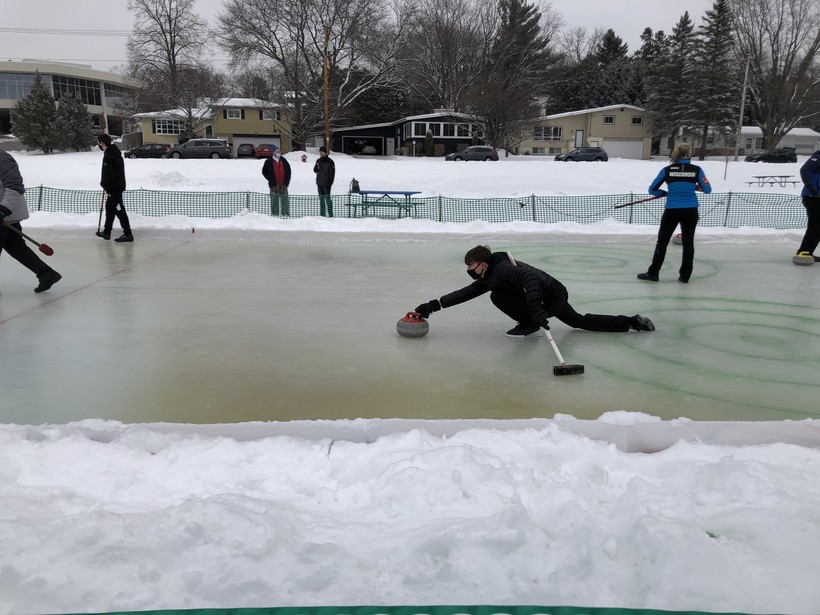 Logan Aro (center) curls at an outdoor bonspiel — or curling match — on a man-made sheet of ice in Monona in January, 2021. The project allowed at least some curling to continue this winter, despite the coronavirus pandemic. Photo courtesy of Matt Aro

Why Is Curling 'A Really Big Deal' In Wisconsin? Let's Go Back In Time

Even In A Pandemic, Enthusiasts Find Ways To Carry On Playing A Sport With A Long Tradition In The State
By Tim Peterson
Share:

Winters in Wisconsin are long, no doubt. Which begs the question: How to pass the time?

For Vietta Kampen, of Portage, there's curling, the small-team sport, played on rectangular sheets of ice, where players slide stones toward a target on the opposite end. Kampen says it's a small community tradition in Wisconsin.

"There's quite a few clubs in smaller towns," she said. "It gave them something to do; makes the winter go by much faster."

Kampen has been curling for more than 30 years and is secretary of the Wisconsin State Curling Association and treasurer of the Portage Curling Club, established in 1850, in Columbia County.

While the Milwaukee Curling Club is the oldest in the country, Columbia County has the highest concentration of clubs — five total — and sheets in the country.

The sport's popularity caught Peter Caldwell, who is a resident of Columbia County, by surprise. He submitted a question to WPR's WHYsconsin asking, "I moved here from New Jersey. Curling is a really big deal in Wisconsin. Bigger than anywhere. Especially Columbia County. Why?"

The short answer is, "We've been doing it longer," Sonny Villwock said to Rob Ferrett, host of WPR's "Central Time."

Villwock is a member of the Pardeeville Curling Club, also in Columbia County, established in 1875. He said, "To keep that in perspective, Custer's Last Stand was in (June) 1876. So we've been doing this for a long, long, long time." 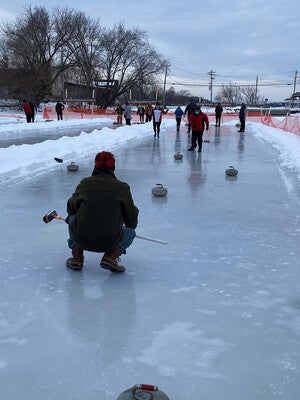 Curlers take their sport outside for a bonspiel in Pardeeville. Photo courtesy of Amanda Seichter

Kampen said immigrants from Scotland in the mid-19th century brought the sport with them to places including Poynette, Portage and Dekorra.

"At that point, they were curling on small lakes and ponds, using old-fashioned stones, brooms and deliveries," she said.

Villwock agrees that from the early days, it was a way for people to keep busy in Wisconsin. Columbia County's cold winters — and solid ice — also meant that people could get curling early and often, he said.

Because it kept people going, new ideas sprang up about how to do it more, despite less hospitable outdoor conditions, Kampen said. People started curling in semi-enclosed sheds and barns that weren't used during the wintertime.

"It became very popular, and grew and grew," said Villwock.

Developing the skills for curling can take a long time. When you're talking about more than 150 years of passing those skills down, you end up with what Wisconsin has, according to Kampen: a great coaching program that produces great athletes. Generations of experience has lead to a lot of success at curling competitions at the state, national and world levels.

Seeing sustained competitiveness and dominance, "that draws people to a sport," she said, and helps account for the sport's longevity in Wisconsin.

Debbie McCormick, of Rio, is one of the Olympic curlers Kampen said "came through Portage" as she developed.

Curlers Get Creative As COVID-19 Moves The Sport Back Outdoors

This winter has hit the sport and its indoor community pretty hard.

Many larger clubs and leagues were forced to cancel their 2020-21 seasons altogether, to either comply with state and local pandemic restrictions, or members simply wanted to stay distant and safe. Some smaller clubs and high school programs, for example in Wausau, have been able to continue their play, according to Wisconsin State Curling Association Vice President Terri Gleason.

Other curlers, though, looked to the early days of the sport in Wisconsin for inspiration to keep their skills up this winter.

Matt Aro, member of the Madison and Arlington curling clubs, helped create an outdoor ice rink for curling in Monona. They built a frame and drew from a nearby body of water to form ice.

"The ice on the outdoors for curling is a lot slower than what you would get in a controlled facility," he told Ferrett. "And you are just kind of at the mercy of Mother Nature." 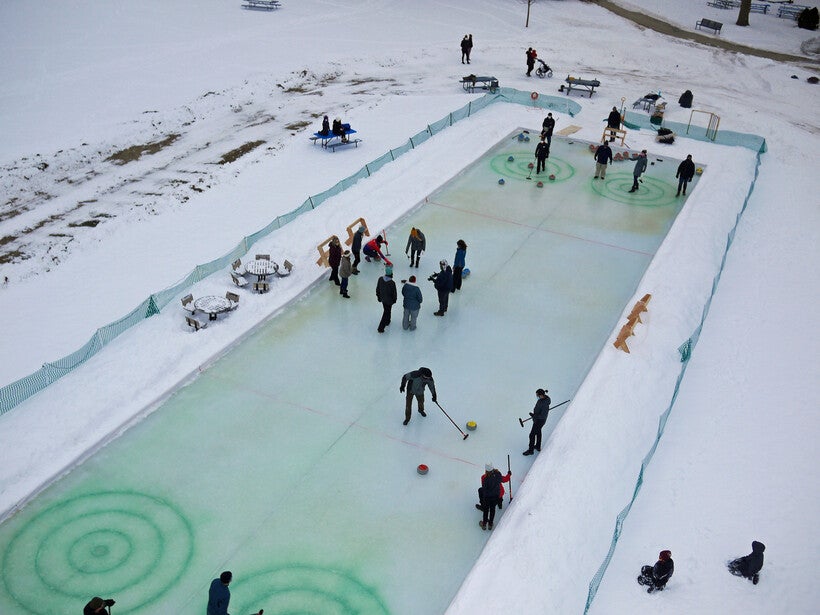 Curlers practice skills on a built-in sheet of ice at a park in Monona at the end of January, 2021. Photo by Craig Wilson, Kite Aerial Photography

"If it gets too hot, the ice is too soft, and it's really slippery and dangerous at that point," Aro continued. "So you just have to call it off. And snow affects the ice. It slows [the stone] down substantially, again makes it real slippery. So we just have to deal with it, it's what our ancestors had to do for the first curling games."

Aro said there is probably one more good weekend left to curl on the built rink, due to potentially warming temperatures. All things considered, he said, they had a good spring, including hosting a well-attended outdoor bonspiel — or curling tournament — in late January.

Chuck Miller, of Wausau, has been curling outdoors for more than a decade on frozen water in front of his house. He told "Central Time" you have to change your form a bit going from indoor controlled ice to outdoors, where they've curled in 20-30 mph winds and temperatures 2 degrees below zero. 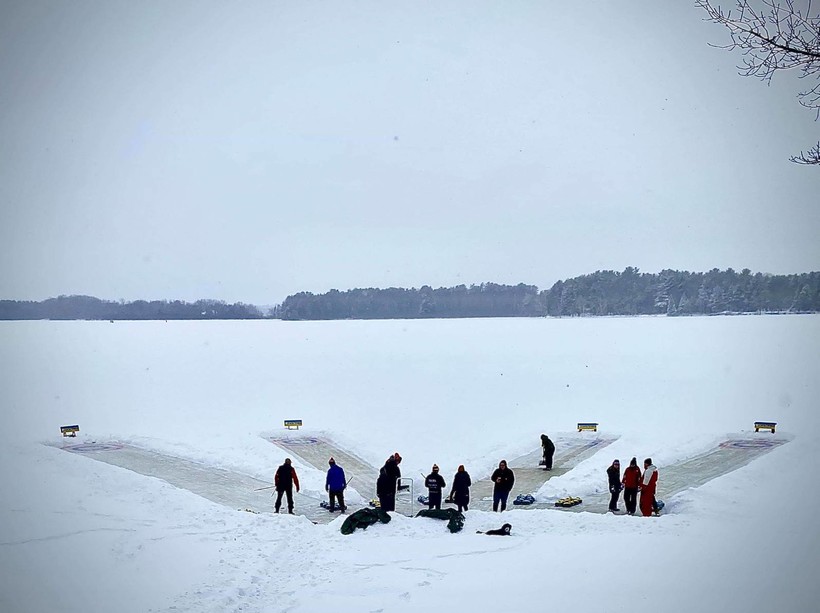 "The delivery is much different than in a controlled club, much shorter slide out," Miller said. "A lot of times people will just push off from the hack and release the stone in one quick motion, and quite harder than what you probably would inside a club. I traditionally shorten the sheet outside because of that. If we had the 150 feet that we use indoors, nobody would get the stone to the other end."

Indoor, outdoor, pandemic or not, what hasn't changed is what people love about the sport of curling in Wisconsin. There's the competitive aspect, but also a lot of social enjoyment, including a tradition of both teams spending time — sometimes hours — together after a bonspiel. That as well as the sport's respectful etiquette standard, like complimenting each other during matches, is often referred to as "the spirit of curling."

"The sport is not just a sport, it is so many different things," Kampen, of Portage, said. "It's aerobic, weight-bearing. There's a very mental side of the game, it's individual/team at the same time. Did I make 16 shots this game? Or did I suck?" she joked. "As a skip, does this person throw a good in-turn or out-turn? Look at the other team, what are they capable of, what can’t they do?"

"It's a chess game on ice that does not recognize gender or age," said Gleason, who curls with the Wausau Curling Club.

Whether they were able to curl this winter or not, all are looking forward to, hopefully, a more normal new curling season, at the end of 2021.

Wisconsin's 2020-21 curling season took a big hit due to the coronavirus pandemic. While some clubs shut down for the year, others took the game outdoors. We answer an audience question about the popularity of curling in Wisconsin, and learn about two different efforts to curl outside.