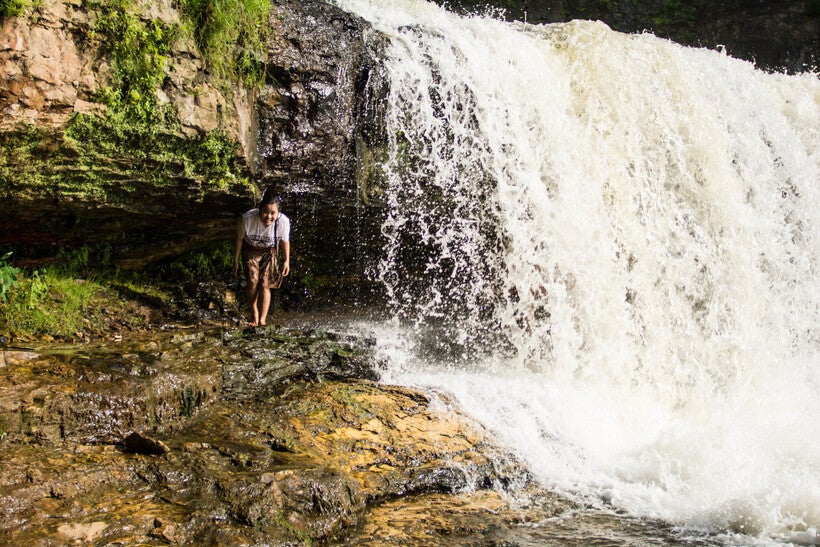 A person walks under Willow Falls at Willow River State Park north of Hudson, Wis. Within the park is Willow Falls and Little Falls Lake. Photo courtesy of the Wisconsin Department of Natural Resources

Why are most Wisconsin waterfalls up north?

Spending time in nature has become more popular during the pandemic. Getting outside to enjoy Wisconsin’s waterfalls is a part of that, and it prompted someone to ask WHYsconsin why the northern part of the state seems to have a monopoly on waterfalls.

Tom Hornung from Madison was entering a drawing and in order to win, he had to ask a question. After that, he came to WHYsconsin with that very question to get the answer. He wanted to learn why northern Wisconsin has more waterfalls than the southern part of the state. 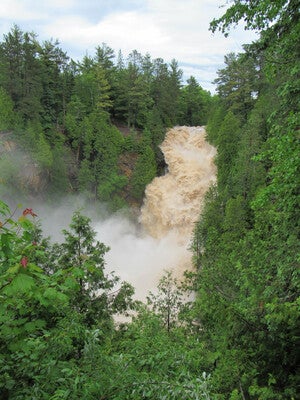 University of Wisconsin-Eau Claire hydrogeologist Sarah Vitale said geology controls the location of waterfalls. Most Wisconsin waterfalls are up north because there’s a higher elevation. Also at play are igneous and metamorphic rocks. The erosion-proof rocks are where waterfalls are found because they are closer to the surface or sticking out of the water and help form waterfalls that last for centuries.

"Where you have the steeper slopes that are maintained by those harder rocks, you’re more likely to get waterfalls," she said. "They’re also associated with the heads of streams which is where most of the river systems in the state start."

Hornung said he thought the Ice Age tens of thousands of years ago may have helped isolate most waterfalls to northern Wisconsin. But the Ice Age did not have much of an influence on the formation of the state’s waterfalls, Vitale said.

"Glaciation did a lot in terms of scrapping off what was on Earth’s surface," she said. "And so any place where you have a lot of glacial deposits, that’s going to be easily eroded. I mean, some of those rivers probably were initially related to glacial activity, but in terms of where they flow and where they’re positioned, a lot of that is determined by bedrock geology."

Amnicon Falls State Park in South Range, Wis. southeast of the city of Superior has waterfalls and rapids along the Amnicon River. Photo courtesy of the Wisconsin Department of Natural Resources 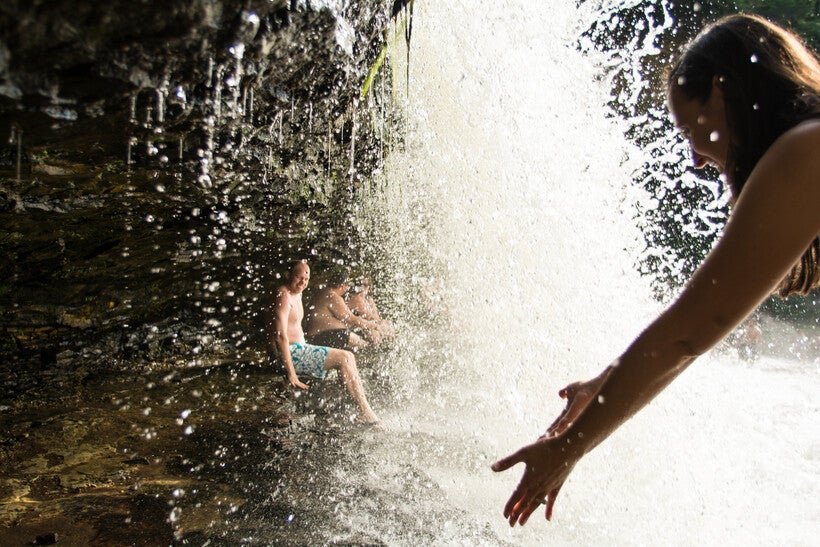 People sit and walk under Willow Falls at Willow River State Park north of Hudson, Wis. Within the park is Willow Falls and Little Falls Lake. Photo courtesy of the Wisconsin Department of Natural Resources

Southern Wisconsin does have waterfalls, including several in and around Devil's Lake State Park near Baraboo, but the vast majority are in state parks or on county lands in far northern Wisconsin.

The Wisconsin Department of Natural Resources doesn't keep track of how many waterfalls the state has, but a map suggests there are more than 100, most in northern Wisconsin and along the eastern coast.

A 2021 report from the Wisconsin Policy Forum found outdoor activities in Wisconsin, including visits to state parks, flourished during the first year of the coronavirus pandemic.

Big Manitou Falls in Pattison State Park near Superior is 165 feet high, and it's the tallest waterfall in Wisconsin and one of the tallest in the upper Midwest.

The state’s most northeastern county of Marinette bills itself as Wisconsin’s waterfall capital boasting 15 waterfalls on public lands. A 2019 report by the University of Wisconsin-Green Bay said in 2018, Marinette County was 20th of Wisconsin's 72 counties in tourism spending with nearly $160 million spent by tourists.

Steve Verdegan is a tour guide for the resort and takes visitors on a trek along the waterfall loop.

"They were pretty blown away. It’s something different," Verdegan said. "You can go to all of these for free on your own. But then coming along on a trip with me, obviously I know all the roads and the routes to get to them, and I know the times of the year when the waterfalls have a little more water on them and which ones you’re really going to want to see."

Verdegan grew up fishing and tubing around the waterfalls of Marinette County and offers a history lesson of the waterfall's importance to Native Americans and the early logging industry. Visiting the waterfalls also offers a chance to go bird watching or spot a whitetail deer or black bear.

"One of my favorite things about the waterfalls has nothing to do with the waterfalls," he said. "All the different berries that pop up and the wildlife that you get to see on this trip as well. The tour that someone gets at the end of May to the tour I give in August or September are two completely different tours."

Verdegan said last summer, dozens of people paid $65 each for a four-hour tour of the waterfalls and a lunch. 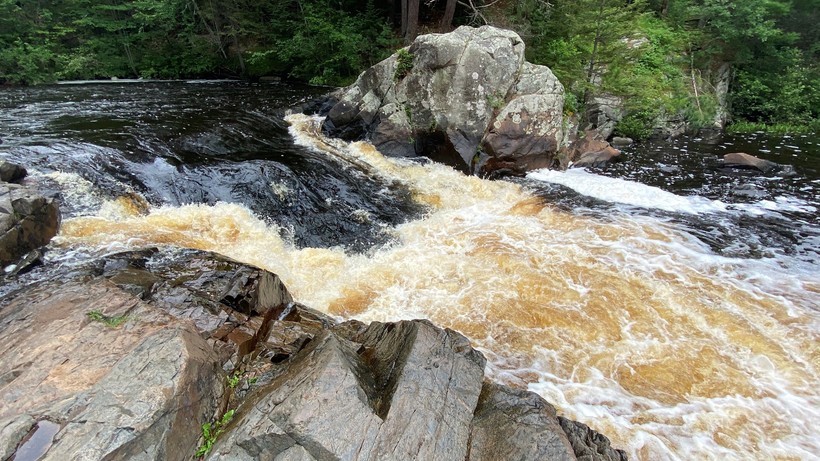 Eight Foot Falls near Dunbar in northwestern Wisconsin is one of 16 waterfalls in Marinette County, which considers itself the state's waterfall capital. Photo courtesy of Marinette County Tourism

"That’s the one I grew up going (to) with my family and where we would do our trout fishing," he said. "There’s a lot of nostalgia that goes with every time I walk out there. I get the goosebumps of going out there and fishing with my dad and my bother."

Marinette County also has more than 300 miles of ATV trails and many of the trails have access to the waterfalls. 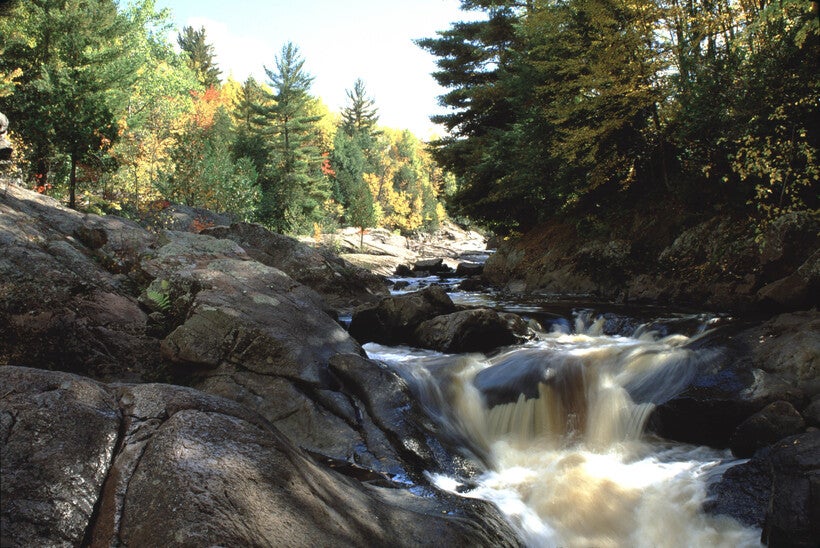 Red Granite Falls is one of the waterfalls at Copper Falls State Park northeast of Mellen, Wis. in Ashland County. Photo courtesy of the Wisconsin Department of Natural Resources