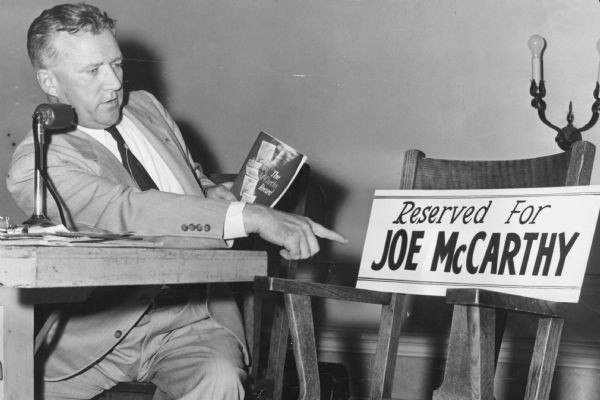 Leonard Schmitt, independent Republican candidate for the U.S. Senate, holds a copy of The McCarthy Record and points to an empty chair with a sign showing the seat reserved for his opponent, Joseph R. McCarthy, to debate the issues with him. Photo courtesy of the Wisconsin Historical Society

Who Was Leonard Schmitt, The Man Who Ran Against Joseph McCarthy?

By the time Leonard Schmitt decided to campaign against Sen. Joseph McCarthy in 1952 for U.S. Senate, McCarthy was a household name.

The red-baiting senator from Grand Chute had built a hound-dog reputation of being able to sniff out supposed communists he claimed were working in the state government.

His lies and scare tactics catapulted him to a position of power in the U.S. Senate. Beguiled and duped voters ensured McCarthy's reelection in 1952. Schmitt, a devout Republican, eluded McCarthy's enchantment and hung his campaign on sharp critiques of his congressman.

WHYsconsin received a listener question asking about who Schmitt was. Research into historical documents shows a man overflowing with integrity, impatient with liars and a big fan of the "little fellow."

Schmitt was born on a Wisconsin farm and moved to Merrill with his family at age 11. He worked in a barbershop and played semi-professional baseball with the Madison Blues while attending school at the University of Wisconsin-Madison, according to an article in the St. Louis Post-Dispatch. Three years after graduating from law school in 1928, he became Lincoln County district attorney.

His first foray into state politics was in 1950, when he ran for governor and lost. In 1952, when Schmitt was 50 years old, he was one of six Republicans and two Democrats vying for one U.S. Senate seat. Republican Alexander Wiley, the state's other U.S. senator, had been reelected in 1950 and was serving his six-year term. Just days before the 1952 primary election that would determine which candidate's name would appear on the ballot for senator in November, Schmitt was quoted in the St. Louis Post-Dispatch morning edition with another strongly-worded appraisal of McCarthy.

"Personal integrity, character and lack of moral standards in politics make him unfit to serve," the article read. "When I oppose a fellow on those grounds, I don’t consider that the party label justifies abandoning principles."

For his candidacy against McCarthy, Schmitt would face heat. Hundreds of people wrote hateful letters to Schmitt. He was called Benedict Arnold and a communist. But to Schmitt, McCarthy didn't represent the values of the Republican Party.

Schmitt, who worked as a partner in the law firm Schmitt, Hartley, Arndorfer & Koppelman in Merrill, ran his campaign on a philosophy of decency. He hosted a 25-hour long radio program during which he answered questions from prospective voters. He funded his run for office, in part, with a "Dollars for Decency" campaign, asking for donations from the "little people" as opposed to millionaire Republicans.

He had the backing of some influencers, including William T. Evjue of the Capital Times newspaper in Madison who convinced Schmitt to run for office. They were longtime friends.

Larry Tye, an author who recently published a book about McCarthy, "Demagogue: The Life and Long Shadow of Senator Joe McCarthy," said Schmitt's fight against McCarthy was set against a backdrop of opportunistic politicking.

"The climate was anything goes, and Joe McCarthy took that to new levels, meaning he went out and raised money and had bigger on-the-ground organizations than politicians had historically had," Tye said. 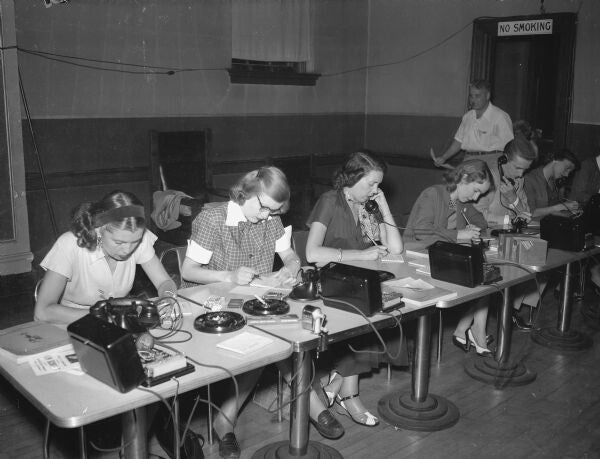 Volunteer telephone workers take questions phoned in for Leonard F. Schmitt, Merrill attorney, who challenged U.S. Sen. Joseph B. McCarthy for the Republican nomination in the primary, during his 25-hour radio talkathon. Photo courtesy of the Wisconsin Historical Society

McCarthy was first elected in 1946, and was one of the youngest people in the U.S. Senate.

"Certainly the least well-known of those newcomers," Tye said.

By 1950, with sights set on reelection, McCarthy was desperate to make a name for himself. He was advised that taking on communists could help secure his win. During a speech in 1950 in Wheeling, West Virginia, McCarthy charged that 205 known communists were working in the State Department. He even waved a piece of paper that he claimed had the names of those people.

McCarthy used his power to blacklist people he claimed were communists, including entertainers, and that disturbed some Wisconsin residents like Nancy Meier, now 85 years old.

"It's because of the political influence and the corruptness and power-hungry people like Joe McCarthy that so many lives were totally disrupted," said Meier, who is from Merrill.

Her father, Ambrose H. Nugent, was a man whose life was disrupted by McCarthy's campaign against communism and the pressure he put on the military to court marshal prisoners of war, she said.

Nugent was a POW from July 5, 1950 until September 1953 in Korea, during which time he made propaganda broadcasts. He was court martialed on his return, and exonerated on all 13 counts against him. 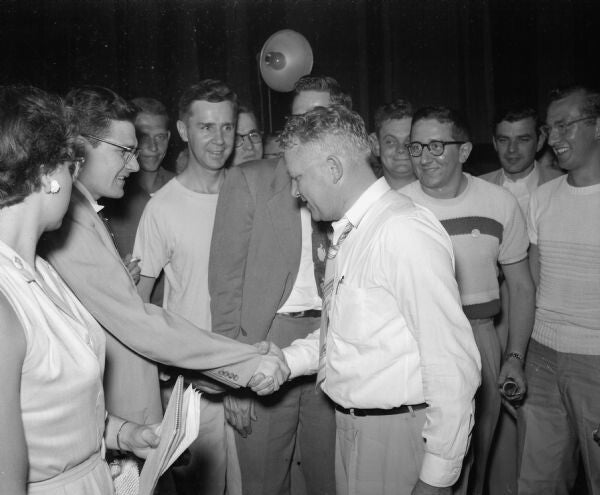 Leonard F. Schmitt, Merrill attorney who challenged U.S. Sen. Joseph B. McCarthy for the Republican nomination in the primary, is shaking hands with well-wishers after his 25-hour talkathon. Photo courtesy of the Wisconsin Historical Society

Although familiar with McCarthy, Meier didn't meet Schmitt until years later. She hadn’t had run-ins with lawyers before, so she was a bit taken aback when she was invited to meet with Schmitt in his office above M&I Citizens American Bank in Merrill. It was 1969.

She had just been elected chairperson of the Democratic Party of Lincoln County — the first woman in that position.

"I received a call from Len Schmitt’s office requesting that I come in and meet Len," Meier said, recalling the meeting more than 50 years earlier from her home in Merrill.

She recalled Schmitt's demeanor: "He was very unassuming. But, boy, he must've been one determined fellow."

Meier also found Schmitt genial. He congratulated her on winning the election.

"He said to me he felt or believed that because I was a woman leading a county political party, I might run into some difficulties, resistance, people really not accepting of it," she said. "He told me that if I needed any kind of support or advice, that I was always welcome to contact him."

"I was kind of flabbergasted because I hadn’t really thought that I would," Meier continued. "But politics in this county, you never know."

Former President Barack Obama took Lincoln County by 1 percentage point in 2012, losing ground on the wide margin he earned in 2008.

Schmitt was a Republican in a conservative stronghold. His actions reveal a man who was dependable for being unchanging in pledging fair and kind treatment of others. He wasn't a man to let party rise above political civility, whether in the case of congratulating the winner of the opposing party or dethroning a titan of tumult in his own party.

Glenn Hartley, a retired attorney and judge who joined Schmitt's firm in 1974, remembers Schmitt as a "delightful man," a mentor and a friend who lobbied for the politician he felt could best fulfill the duty of representation.

For example, Hartley said Schmitt gave the introduction speech in Merrill when ex-President John F. Kennedy, a Democrat, visited. Schmitt had a plaque on his desk similar to the one on Democratic ex-President Harry Truman's desk that said, "The buck stops here!"

"He talked like a (Robert) La Follette progressive but challenged 'tail gunner' Joe on the Republican ticket," Hartley said. 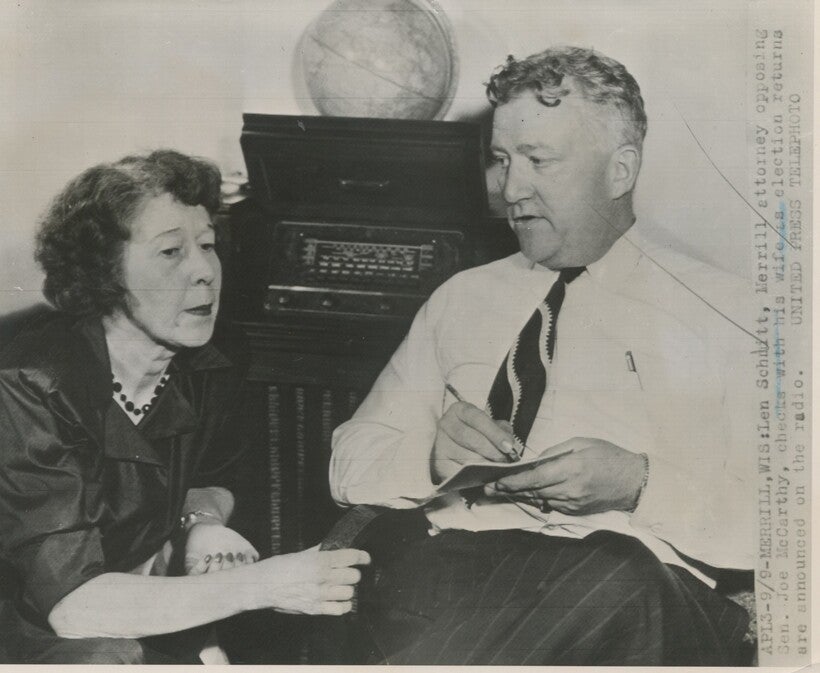 There weren't many people convinced that Schmitt could beat McCarthy in the 1952 primary election.

From all appearances, it seemed that Schmitt could pull crossover votes from Democrats, since there was no primary for the Democratic race. Henry S. Reuss was the only Democratic candidate.

But then the tide turned as federal attorney for Western Wisconsin Thomas Fairchild entered the Democratic primary race July 8, 1952 after initially withdrawing his name back in May. Fairchild, many thought, was the stronger candidate to go up against McCarthy.

With a primary election for Democrats now scheduled for September, Schmitt's chance of getting those votes was minimal. In fact, one estimate puts his losses at around 50,000 votes. He lost out on funding opportunities because few would invest in him with an upcoming Democratic primary.

Schmitt was defeated overwhelmingly, with 213,701 votes to McCarthy's 515,481. McCarthy won reelection and would go on to continue his crusade against communists until his censure in 1954. A heavy drinker, McCarthy died in 1957 of liver disease.

Undeterred by his loss, Schmitt continued his career in civility, encouraging young attorneys in his Merrill office to get involved in politics, no matter the side.

"He just went about his business," Meier said. "He was influential without being power hungry."

Schmitt married twice in his life, both times to women named Grace, according to his obituary. He had no children. In 1991, he died of a heart attack. He was 88 years old.

This story came from a question as part of the WHYsconsin project. Submit your question at wpr.org/WHYsconsin and we might answer it in a future story.