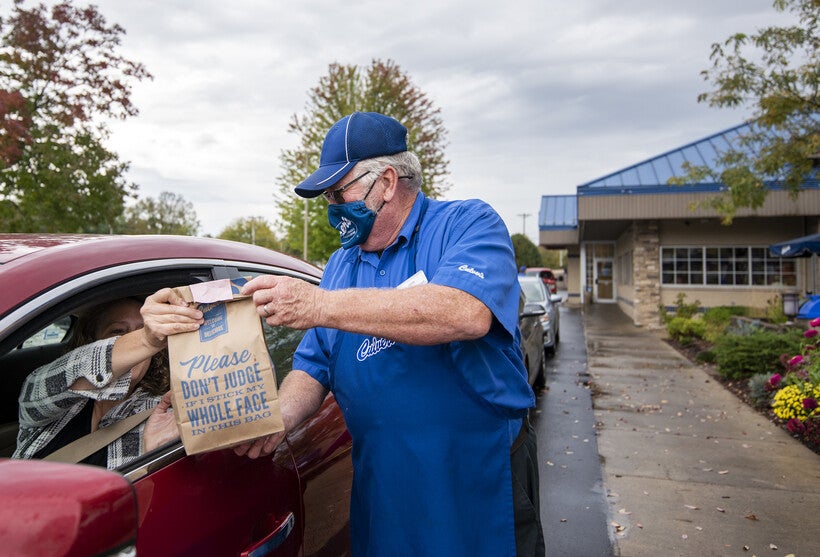 Culver’s employee John Evert hands an order to a customer Wednesday, Oct. 13, 2021, outside of the original Culver’s in Sauk City. Angela Major/WPR

What's the scoop on the origin of the Culver’s franchise?

The first Culver's restaurant opened in Sauk City in 1984
By Alyssa Allemand
Share:

Just about everyone in Wisconsin is familiar with Culver's.

Whether it's the cheese curds, the custard or the ButterBurgers that draw you in, its popularity has extended beyond its home state of Wisconsin to the greater Midwest — and even southern states like Texas and Florida. But have you ever wondered how the food chain came to be?

Marlene reached out to WPR's WHYsconsin, asking if Sauk City is where the story of Culver's begins.

Marlene is right. Sort of.

On July 18, 1984, the Culver family opened the first Culver's restaurant on Phillip's Boulevard in Sauk City.

The Culver's headquarters, which was built in 2009, is located in Prairie du Sac.

Together, Sauk City and Prairie du Sac make up the area known as Sauk Prairie, which has a population of roughly 8,000 people. It’s about an eight-minute drive between the original Culver's and its headquarters.

Back in October, owner Craig Culver sits in his corner office at the headquarters overlooking the Wisconsin River. He's just returned from an event in Oregon, where he announced the company is in the beginning stages of bringing a Culver's to the town. Currently, there are 142 Culver's locations in Wisconsin.

In total, there are more than 830 Culver's restaurants in 25 states in the United States, said Eric Skrum, Culver's director of public relations and communications. 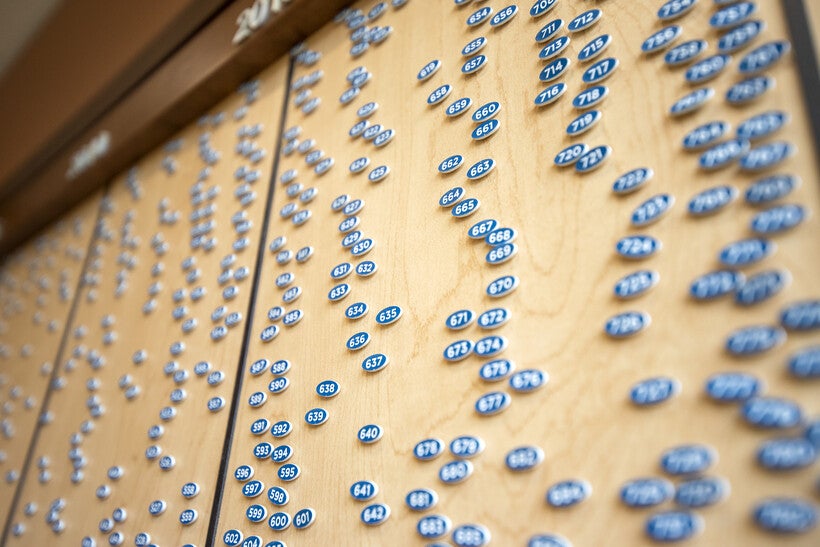 Numbers on a display show how many franchise locations of Culver’s are open in the country Wednesday, Oct. 13, 2021, at Culver’s headquarters in Prairie Du Sac, Wis. Angela Major/WPR

But Culver's wasn't the first business the Culver family owned and operated in the Sauk Prairie area, said Culver. The family has a history of entrepreneurship with local restaurants.

"My dad sold the A&W and found another business called the Farm Kitchen Resort (in Baraboo), which my parents had for another six years, another restaurant and resort. And eventually we found our way back to Sauk Prairie. We bought the A&W back for the second time and ... we sold it again six years later," Culver said. "And we had bought a little supper club after that in Baraboo, Wisconsin, called the Ritz — Culver's Ritz. And eventually we came back to Sauk Prairie again and got the A&W back again. We decided to defranchise, and it became Culver's Frozen Custard and ButterBurgers."

But getting steady business at the first Culver's was a struggle, he said. 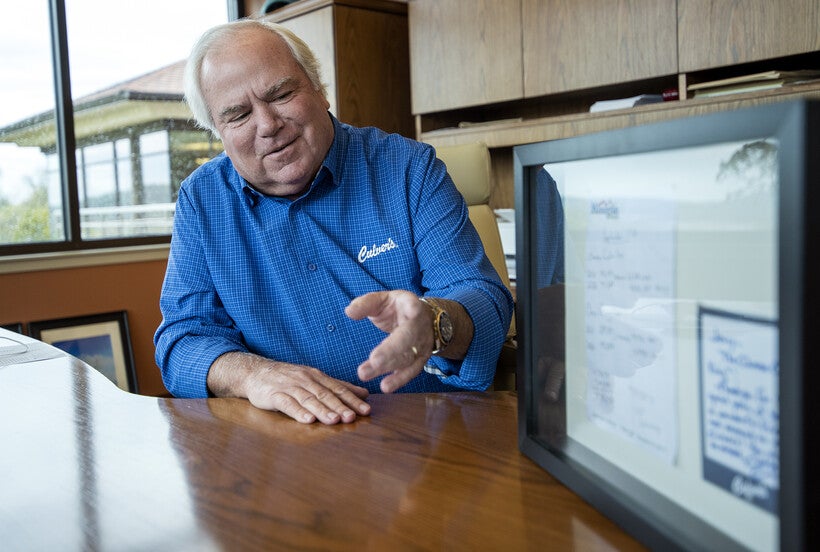 Craig Culver, the co-founder of Culver's, gestures at a note he keeps framed in his office from a franchise owner Wednesday, Oct. 13, 2021, at the Culver’s headquarters in Prairie Du Sac, Wis. Angela Major/WPR

The restaurant was located right across from a Hardee's, which Culver said was the fastest-growing burger chain in the U.S. at that time. And the Dairy Queen Blizzard Treat was invented in 1985.

But as the years continued, business would boom. Eventually, in 1987, the company built the second Culver's restaurant in Reedsburg. Then, a third in Wisconsin Dells. After that, Culver's opened its first franchise, but it didn't go as planned and ended after a year.

The next Culver’s franchise opened in 1990 in Baraboo and growth picked up after that, Culver said.

Ever since, Culver's restaurants have been popping up along interstates and main drags. In fact, despite the limitations of the coronavirus pandemic, the franchise opened a record 50 new restaurants in 2020, Skrum said. And Culver said the company has a plan to build more than 300 restaurants down the line, which would put the total at 1,000.

But it isn't about the numbers, Culver said.

Rita Larsen was an administrative assistant in accounting at Culver's for 22 years. She retired from the company in October. When she started in 1999, she said the chain had 86 restaurants. 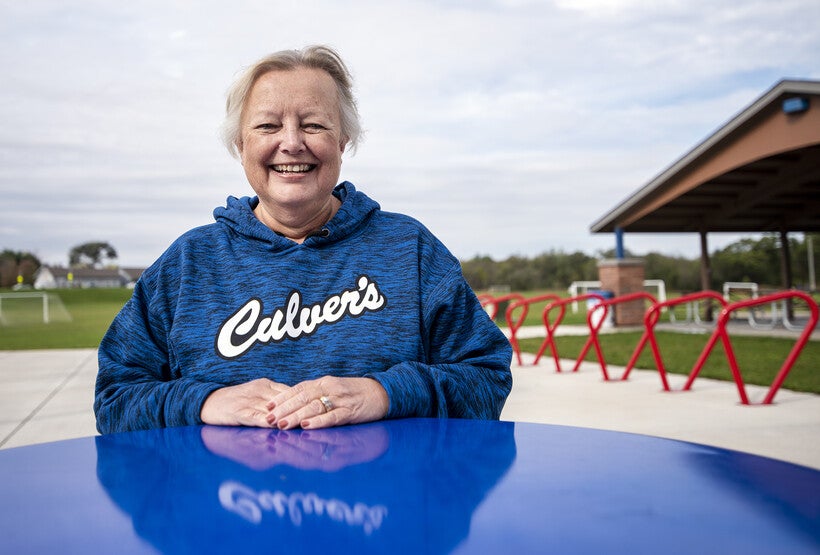 Rita Larsen worked at Culver’s for 22 years as an administrative assistant in accounting. She started in 1999 and retired in October. Angela Major/WPR

Larsen said she applied for the job because her oldest son worked in the Sauk Culver's restaurant at the time. Her two younger sons worked at the Sauk chain throughout high school as well, and all her sons continued working at Culver's during college at locations in Fort Atkinson, Platteville and Galena, Illinois. After college, Larsen's oldest became assistant manager and was eventually promoted to general manager of the Sauk, Spring Green and Baraboo restaurants.

"It's just always been a family atmosphere where all the team members care about not only what you're going through at work, but even your personal life," Larsen said.

The Culver's business is active in giving back to communities, funding programs like, Thank You Farmers, Give Local share nights (also known as Scoopie Night), and the Culver’s Foundation. 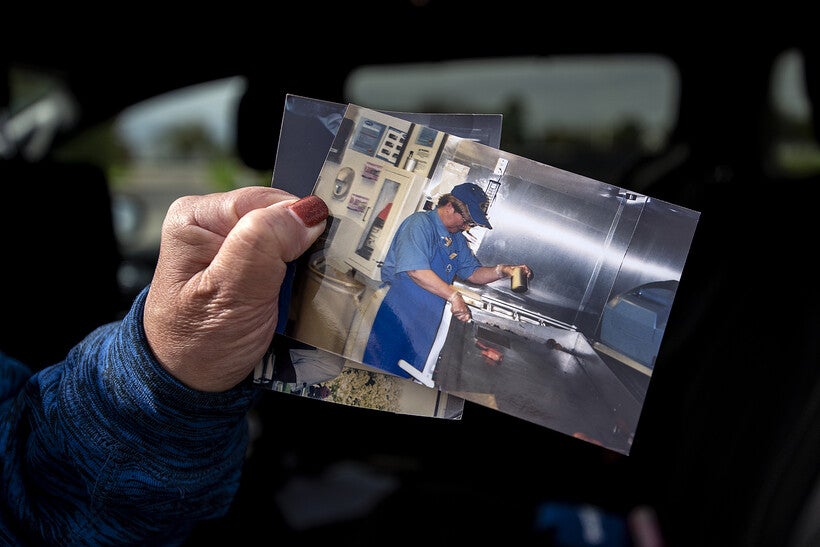 Rita Larsen holds photographs of herself working at a Culver’s restaurant in Wausau, Wis., in 2008. Larsen worked for Culver’s for 22 years before retiring in October. Angela Major/WPR

"Culver's does a lot for the communities. They're always donating," Larsen said.

Culver said the plan was always for him to raise his family in Sauk Prairie and see where the franchise took them. 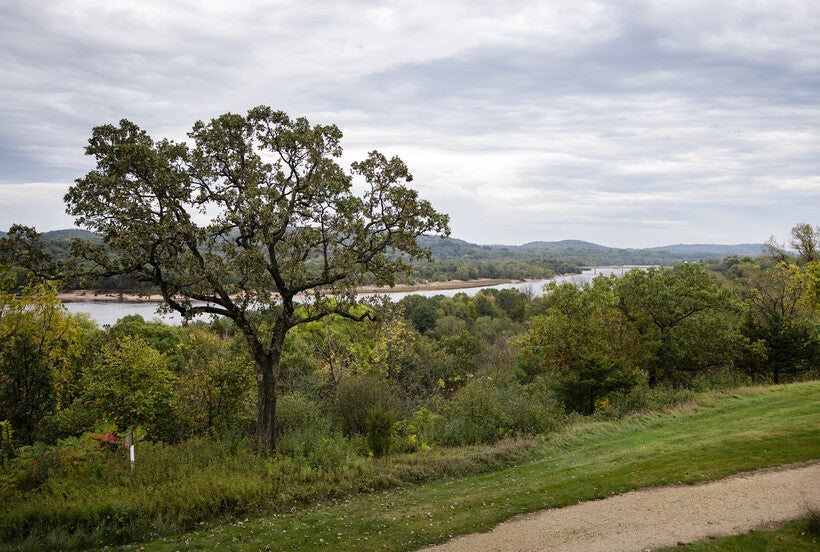 The Wisconsin River can be seen from the Culver’s headquarters Wednesday, Oct. 13, 2021, in Prairie Du Sac, Wis. Angela Major/WPR

"We were fortunate to get through the first year, and there was no plan at first that we were going to have multiple restaurants," he said, reflecting back to 1984. "The plan was to move back to Sauk Prairie, you know, where I grew up, and to live happily ever after. And hopefully the business would take care of us. And eventually that's what happened. But I wanted my children to grow up where I did. And I love this little town of Sauk Prairie along the beautiful Wisconsin River."